In the last decade, Washington has clearly demonstrated its intention to strengthen its presence in Central Asia, creating a foothold in a region that quite easily can be described as the ‘heart of Eurasia’. Should it have succeeded, it would have had a perfect opportunity to apply military pressure on Russia, China, Iran and the entire Eurasian continent. In geopolitical terms, the United States actively sought to connect Central Asia to South Asia – Afghanistan, Pakistan and India, to “tear it away” from Russia and prevent China from gaining access to its raw materials.

Today, the region is a strategic corridor of utmost importance that stretches between continental Europe and Asia. It is rather critical for the growth of Chinese markets. The United States was desperate to establish control of this region in order to jeopardize the New Silk Road project that tries to outflank the much discussed ‘Pivot to Asia’ of the U.S. by building land routes. In addition, the expansion of U.S. military and political presence in Central Asia would have allowed it to counter Russia’s strengthening influence.

In the past, the United States preferred to “negotiate” its terms with respective leaders of the countries that were in the zones of its geopolitical interests, but in recent decades, this practice has been abandoned. Instead, the White House has adopted a new strategy of toppling unwanted governments and replacing them with semi-criminal but somehow “legitimate” political groups and states, or by simply creating failed states that cannot control their own territory. This allows Washington to fulfill its agenda faster and cheaper. Recent events in a number of Middle Eastern and North African countries serve as a perfect example of this strategy.

This choice of modus operandi of the White House is understandable: should a specific country be controlled by a strong government, the U.S. oligarchy cannot gain easy access to its resources. Should American intelligence agencies succeed in provoking a coup d’etat in a country, Washington will not simply get is hands on desired resources but will also be able to use the rapid spread of violence as a pretext to further increase U.S. military presence across the region in question.

That is why the U.S. expansion in Central Asia manifested itself in the form of an active military expansion. America was happy to get involved in the construction of local military bases, outposts, centers for training, and reconstruction of educational institutions. Thus, in Tajikistan alone, U.S. Central Command is carrying out at least 60 military drills a year. The U.S. massively recruited people in military circles, intelligence communities and government circles to use them to overthrow a legitimate government, as has already been done many times around the world. Moreover, against the background of ongoing cuts in the U.S. military budget, additional funds have nonetheless been allocated to operations in Central Asia.

However, the United States was not patient enough in its expansion in Central Asia, which led to a critical political mistake. The White House rushed the process of “democratization” across the countries of Central Asia, while trying to provoke unrest that would pave the way for a coup d’etat in a number of states. But the course of events has clearly shown that the ‘color revolution’ tactics have fallen short. Ironically enough, the growing influence of the White House in Central Asia has been stopped by the Tulip Revolution in Kyrgyzstan in March 2005 and by the events in the Uzbek city of Andijan in May of the same year.

U.S. meddling in local affairs has provoked a sharp rise of discontent among the regional leaders, which in turn affected their relationship with the United States. There’s a reason why one state after another started declaring their adherence to the principles of cooperation with Russia and China. The Shanghai Cooperation Organization has clearly played a vital role in counterbalancing the U.S. strategic advance in the region.

The latest confirmation that Central Asian leaders are well aware of the cunning ways of Washington’s politicians is the latest denunciation of the Cooperation Agreement between the U.S. and Kyrgyzstan that was signed 22 years ago. [Kyrgyzstan denounces cooperation treaty with America, The Diplomat, July 22, 2015 ] A Kyrgyz opposition figure has been sentenced to life by the Supreme Court of Kyrgyzstan for incitement of riots and the murder of a policeman during the ‘Tulip Revolution’ in 2010. As a result, the country has refused to cooperate with the U.S. in the construction of a ‘democratic society’.

It should also be noted that this agreement was not treating sides as equals, since there was a number of obvious deviations from the norms of international law. The agreement was supposed to provide diplomatic immunity to a wide range of U.S. citizens, in particular the civilian and military personnel of the U.S. government, stationed in the Kyrgyzstan Republic. Such international agreements were considered controversial by many international experts, who saw in them the obvious violation of the sovereignty of Kyrgyzstan. But Bishkek has made a number of steps to get on an even footing with Washington, the first of which was the closure of the U.S. air base, Manas in Bishkek [Kyrgyz MPs vote to shut U.S. base, BBC News, July 2009], along with the fact that it increased its activity amid the Collective Security Treaty Organization [Wikipedia].

The participation of Kyrgyzstan in this defense alliance confirms the fact that, officially, Bishkek shares a common view with its regional allies. However, the Manas closure is but the first step Bishkek will take.

How did it all go so wrong? A nasty row has broken out between the United States and Kyrgyzstan over Washington’s decision this month to bestow the 2014 Human Rights Defender Award on jailed activist Azimjan Askarov.

In September 2010, Askarov was sentenced to life imprisonment for what Kyrgyz authorities say was his role in inciting the mob killing of a police officer during the ethnic unrest in June that year. Western governments and advocacy groups have regularly mounted staunch defenses of Askarov, saying that he was framed and later found guilty in a trial marred by irregularities.

The U.S. decision to grant Askarov with an award has enraged Kyrgyzstan, whose government reacted on July 17 with the announcement that it is to repeal a 1993 treaty between the two countries.

The statement said that the award “did not ahere to levels of cordial relations between Kyrgyzstan and the United States and could damage government efforts to strengthen interethnic harmony.” The government also argued that U.S. actions were threatening peace and social stability in Kyrgyzstan.

As to Askarov’s guilt, Kyrgyzstan says they can be no doubt: “The decision of the court was taken on the basis of undeniable evidence, Askarov’s guilt has been proven in all instances. The Kyrgyz Republic stands for the supremacy of the law. The justice system is an independent branch of power.”

The most exhaustive account of the Askarov saga has been penned by journalist Philip Shishkin in the 2003 book, “Restless Valley; Revolution, Murder and Intrigue in the Heart of Central Asia.” A lengthy excerpt published on Shishkin’s website this week allows for a more complex account than the Kyrgyz government is willing to allow for.

It is not immediately clear how the revocation of one of the founding treaties in Kyrgyz-U.S. relations could play out in real terms, but the document makes for ominous reading.

The treaty provides for a tariff waiver on goods imported into Kyrgyzstan as part of U.S. aid programs. It also exempts non-Kyrgyz employees of U.S. government or private aid programs from income and social security taxes.

While hardly damaging U.S. interests, the move stands to hurt anybody benefiting from Washington-funded aid programs. That might have potential to dent U.S. standing among the broader population, if the combination of smear campaigns and lurid conspiracy theories in Russian and Kyrgyz media had not achieved that aim already.

Advocacy groups have long lambasted the West, and the United States in particular, for taking a weak stand on rights issues in Central Asia. As many have argued, Washington has appeared willing to temper criticism as long as those countries could be of assistance in U.S.-led NATO military campaign in Afghanistan.

Kyrgyzstan’s strategic value to the United States has all but vanished, however, since Bishkek decided to close the Manas military air transit center outside Bishkek in June 2014.

Washington is taking unusally bold stances elsewhere in the region, too.

U.S. ambassador to Uzbekistan, Pamela Spratlen, may have ruffled some feathers in Tashkent in June by pointedly meeting with that country’s most outspoken human rights champion, Elena Urlaeva. While hailing Urlaeva’s tireless advocacy work, the embassy discreetly avoided mentioning the episode that precipitated the meeting: a harrowing catalogue of abuse that Urlaeva says was recently meted out to her by police.

Still, these isolated cases may be too little to prompt talk of a major sea change in how the U.S. balances its security interests and humanitarian agenda.

Along with the usual humanitarian assistance, the U.S. embassy in Tajikistan has been busy supporting Tajik law enforcement officials with material and training. All the while, Tajikistan has been intensifying its campaign of repression against the opposition. 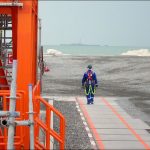 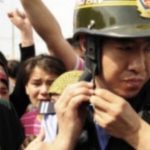