U.S. in Ukraine: Watch what they do, not what they say

As activists, students and workers gather in Washington, D.C., for the Spring Rising antiwar mobilization March 18-21, many are probably unaware that 300 U.S. troops arrived in Ukraine this month, with another 300 expected to join them shortly. 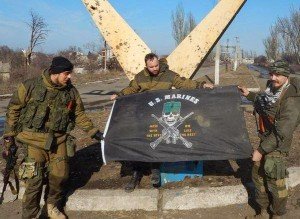 The soldiers are stationed at the Yavoriv Training Area in Lviv, near the Polish border in western Ukraine. Their mission, according to the Pentagon, is to train divisions of the Ukrainian National Guard. But their presence also establishes a provocative U.S. military “footprint” in this key agricultural and industrial country on the Russian Federation’s western border.

All this despite a ceasefire agreement, negotiated by Russia, Germany and France, which went into effect February 15. And like previous ceasefires, the U.S. -backed government in Kiev routinely violates the terms and is using the “breathing spell” to rebuild its military forces in the embattled Donbass mining region.

“Before this week is up, we’ll be deploying a battalion minus … to the Ukraine to train Ukrainian forces for the fight that’s taking place,” 173rd Airborne Brigade Commander Michael Foster told a meeting of the Center for Strategic and International Studies think-tank in Washington on March 3. (Global Research, March 3)

U.S. forces are scheduled to stay six months. But discussions are underway about “how to increase the duration and the scope of the training mission,” Foster said, echoing remarks made in January by former Assistant Secretary of Defense for International Security Derek Chollet.

Meanwhile, in London, Prime Minister David Cameron told a House of Commons committee February 24 that up to 75 British soldiers would be sent to Ukraine to develop “an infantry training program with Ukraine to improve the durability of their forces,” the BBC reported.

“Today’s announcement builds upon the work that we have already undertaken through NATO and bilaterally,” added British Defense Secretary Michael Fallon. (Sputnik, Feb. 24)

When most people in the U.S. hear the term “National Guard,” they think of the recruiting commercials touting “one weekend a month, two weeks a year” of training to “serve your country.” The Pentagon is playing on this association to make their mission sound benign.

Of course, the National Guard has a long history of being employed to put down rebellions and strikes in the U.S., often with the most brutal methods. And in the last 15 years, since the start of Washington’s “war on terror,” many National Guard soldiers have been required to serve long stretches in the occupations of Iraq and Afghanistan.

But the Ukrainian National Guard is something else altogether. The brainchild of far-right Interior Minister Arsen Avakov, it came into being one year ago, shortly after the U.S.-backed coup that overthrew Ukraine’s elected president.

The National Guard is based on neo-Nazi street-gangs and fascist political organizations that formed the power base of the Euromaidan protest movement which carried out the February 2014 coup in Kiev. It answers to Avakov, not the Ukrainian Armed Forces, which the coup-makers considered unreliable, and which has continued to disintegrate during the war in the southeast.

The National Guard, in fact, has been the backbone of Kiev’s brutal “Anti-Terrorist Operation” against Novorossiya, targeting civilians throughout the Donbass mining region since April 2014. It is nearly as ruthless as the “volunteer” fascist battalions affiliated with the Right Sector.

While the Ukrainian Armed Forces today are a meat grinder for workers, unemployed people and youth forcibly drafted, and who frequently desert at the first opportunity, the National Guard comprise the forces most loyal to the junta of oligarchs, neoliberal politicians and fascists in Kiev.

This is the force the U.S. wants to train and strengthen.

But there’s much more to the story.

Throughout Europe, the Baltic and Central Asian states bordering Russia, and even on U.S. soil, an unprecedented volume of provocative war games are underway, all clearly threatening Moscow.

Why? Because the real goal of the U.S. power play in Ukraine is to establish NATO military power on Russia’s border, with the aim of fomenting regime change to break the Russian Federation into pliable, profitable pieces that can be easily dominated by Wall Street and its European junior partners.

That’s why since day one of the Ukrainian crisis, Democrats, Republicans and the corporate media have united to turn reality on its head by portraying Russia as the aggressor – a Big Lie to cover up their own role.

Here’s a sampling of the provocative moves in the past month, culled from U.S. military sources, Ukrainian and Russian media, as well as anti-war sites like StopNATO.org and Global Research:

On February 10 – as ceasefire talks were underway in Minsk, Belarus – the U.S. House of Representatives passed a resolution to authorize $1 billion for training, equipping and providing “lethal aid” to Kiev through September 2017.

On February 24, U.S. military vehicles took part in a NATO parade in the Estonian town of Narva, just 300 meters from the Russian border. It included 140 armored vehicles and nearly 1,500 troops, including U.S. soldiers.

The same day, in Alaska, paratroopers from the U.S. Army’s 4th Infantry Brigade Combat Team performed the largest U.S. airborne mission north of the Arctic Circle in more than a decade as part of Exercise Spartan Pegasus. “This exercise demonstrated their unique ability to rapidly mass power on an objective in extremely cold and austere environments,” said an Army press release.

U.S. Marines and soldiers from the Republic of Georgia staged a “pre-deployment training” during Mission Rehearsal Exercise in Hohenfels, Germany, February 27.

NATO Supreme Commander in Europe and Chief of the U.S. European Command Philip Breedlove told the Senate Armed Forces Committee March 3 that it is “essential” for Washington to provide “military support” to “U.S. partners Georgia, Moldova and Ukraine [which] face a different security challenge from Russia than those facing NATO allies.”

On March 6, U.S. and Canadian soldiers carried out drills “in winter conditions” with their Latvian counterparts, while live-fire training exercises were conducted at Drawsko Pomorskie in northern Poland.

Some 450 U.S. soldiers and 25 Black Hawk helicopters will be deployed to Illesheim, Germany, in March “in support of Operation Atlantic Resolve, a multinational training mission to reassure Poland and the Baltic countries of NATO’s commitment in the face of Russia’s aggressive moves in Ukraine.” The deployment is to last 9 months.

Latvia received more than 120 armored units, including tanks, from the U.S. on March 9. U.S. Army General John O’Connor, who witnessed the tanks’ arrival, declared that “Freedom must be fought for, freedom must be defended.”

“Watch what they do, not what they say” — the old adage is always good advice when dealing with U.S. imperialism. And nowhere is that more apparent than in Washington’s current “debate” over arming Ukraine.

The media depict a dispute over whether the U.S. should provide “lethal weapons,” heavy weaponry, and offensive weapons to Ukraine for its war against “pro-Russian separatists,” as the anti-fascist resistance in Donbass is usually labeled.

The White House states that it is still “considering” whether to provide so-called lethal aid. However, top administration officials, from Secretary of State John Kerry on down, have voiced their support.

All of this amounts to smokescreen and posturing for political gain. In fact, the Obama administration and Congress have colluded all along to arm the fascist junta which they collaborated in bringing to power. In December, Congress overwhelmingly approved and Obama signed the “Ukrainian Freedom Support Act” authorizing “lethal aid.”

Airfields in Eastern Ukraine immediately shut down as U.S. military cargo planes flew in massive amounts of old and new NATO weaponry. Much of it this war material was captured and put on public display by the Novorossiyan people’s militias following the defeat of Ukraine’s January 2015 military offensive.

In February, Ukrainian President Peter Poroshenko inked an arms agreement with the United Arab Emirates, a U.S. client state that frequently serves as a hub to funnel advanced weaponry to right-wing regimes and counter-revolutionary movements supported by Washington.

On March 11, Obama approved $75 million in additional “non-lethal” military aid to Ukraine, including secure communications equipment, drones, counter-mortar radars, night-vision goggles, and military ambulances, to be delivered in the next six to nine months. He also approved the provision of 30 armored and 200 unarmored Humvees, Sputnik reported.

The same day, the U.S.-dominated International Monetary Fund approved a new $17.5 billion financial aid package for Ukraine in exchange for additional painful austerity measures. (RT.com, March 11) This is meant to ensure that Kiev will remain solvent enough to continue its proxy war in the coming months, despite its collapsing economy.

Whether or not the U.S. openly arms Ukraine with offensive weapons, or continues to do so covertly and through third countries, is far less significant that the blatant war moves of U.S. and NATO forces in the region.

Every day, it grows more urgent for the anti-war forces in the U.S. to stand up and demand: Stop the weapons, stop sanctions, stop provocations against Russia! Stand with the people of Donetsk and Lugansk resisting genocide and austerity!