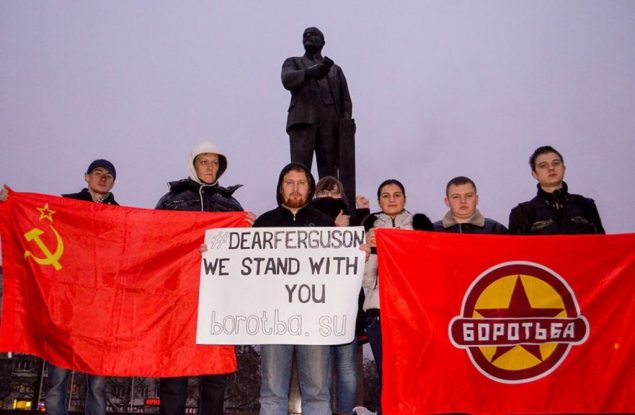 The struggle against fascism and white supremacy is international. In 2014, exiled Ukrainian antifascists rallied in solidarity with Ferguson uprising against racist police terror. Photo: Borotba

A talk given by Greg Butterfield at the “Unity for Socialism and Revolution” conference in Los Angeles on March 16.

Last October, a few members of an armed white supremacist group called the Rise Above Movement were arrested in California. This group participated in the violence in Charlottesville that led up to the murder of Heather Heyer on August 12, 2017. According to their FBI rap sheet, these racist goons later received training from the fascist Azov Battalion of Ukraine.

What’s most important to know about the Azov Battalion is that it is an official part of the National Guard under the Interior Ministry of Ukraine. It’s a recognized part of the state. Azov is one of several neo-Nazi battalions that fight in Ukraine’s war against the anti-fascist Donbass republics of Donetsk and Lugansk — a war that has cost more than 13,000 lives since 2014, according to the United Nations.

Azov is a particularly notorious branch of Ukraine’s thriving fascist movement. The group openly uses neo-Nazi flags and symbols. Its members and supporters have attacked, and in some cases killed, anti-fascists, communists, Roma, Vietnamese and other minority nationalities, women and LGBTQ2S people, as well as members of rival fascist gangs.

The government that nurtures Azov came to power five years ago through a coup carried out with the aid of the U.S. government — much like the coup the U.S. is trying to carry out today in Venezuela. Back then a Democrat was in the White House, today a Republican is. Otherwise there’s not much difference.

The U.S. Congress passed a measure that was supposed to block U.S. military aid from reaching Azov. It’s completely phony. Troops from the U.S. and other NATO countries routinely train and arm the fascist battalions alongside the regular army in Ukraine. Azov was formally integrated into the National Guard to skirt this toothless law.

When U.S. white supremacists get training from Ukrainian Nazis, it’s not an isolated case of blowback. It’s just one step removed from direct training by the Pentagon.

The truth is, fascists from all over Europe and the U.S. have flocked to Ukraine over the past five years, and many have not only received training, but have actually joined the war against Donbass as volunteers or paid mercenaries.

When Western anti-fascists volunteer to fight beside the Donbass republics, their governments treat them as terrorists. The neo-Nazis face no such persecution, because they are fighting on “right side,” according to Washington and the European imperialists. It doesn’t take much imagination to see what will happen if Trump succeeds in igniting armed conflict inside Venezuela.

The U.S. has carried out many coups and interventions against sovereign countries by unleashing fascists and similar ultraright forces. Many people know the example of Chile. More recently, there was Libya and Syria. In Syria, the imperialists failed, but at the cost of enormous destruction and human suffering that continues today.

The U.S. export of and support for fascist violence abroad, to maintain its empire of profits, inevitably finds its way back home. Dr. Martin Luther King Jr. said it best when talking about the Vietnam War: the bombs dropped on other countries also explode here.

There are many more examples, like the Defense Department’s 1033 Program, which transfers billions of dollars in military hardware to local police departments free of charge, or the way racist cops that terrorize Black and Latinx communities get training from U.S.-funded Israeli occupation forces schooled in the suppression of Palestinians.

Something essential has long been missing from the work of the anti-war, anti-imperialist left in this country, and this is a sustained effort to link the struggles of workers and communities in the U.S. with the struggle against wars, coups and sanctions. Let’s resolve to change that, starting today — for the people Venezuela, Donbass, the Philippines and for ourselves too.