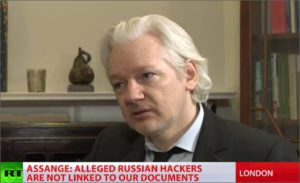 WikiLeaks founder Julian Assange has told RT he believes the U.S. has only circumstantial evidence that Russia is behind the hack that led to the release of sensitive emails from the Democratic National Convention database. “There are claims that in the metadata after someone has done a document to PDF conversion and in some cases, the documents – the language of the computer that was used for that conversion, was Russian,” Assange told Afshin Rattansi, the host of RT’s ‘Going Underground’.

Assange added that any evidence Russia was involved is merely circumstantial and could have been planted deliberately by “someone who wanted to make it look like a Russian” was behind the hack.

Previously, Assange said that he believes the accusations from the Democrats are an attempt to deflect attention from the contents of the leaked documents.

Watch the full interview with Assange on Going Underground on Saturday, August 6.

Some 20,000 DNC emails were made public by WikiLeaks on July 22, revealing a close working relationship between the party and some mainstream media figures as well as collusion with the Hillary Clinton campaign to sideline Bernie Sanders, her challenger for the presidential nomination.

The Kremlin has dismissed the charges that Russia was behind the DNC hack as “quite absurd,” with presidential spokesman Dmitry Peskov pointing out what he called the “American style” of casting blame first, then investigating afterwards. “We in Russia are used to investigating first, before accusing anyone of anything. We believe it is more logical and more correct,” Peskov said.

“Such statements by Ms. Clinton are typical pre-election rhetoric,” Peskov added. “There is nothing tangible in her accusations, and we believe their character is more emotional.”

U.S. Director of National Intelligence James Clapper said on July 29 that it was time to stop blaming Russia where there was no proof. “We don’t know enough to ascribe motivation regardless of who it might have been,” he said.

He added that the U.S. has been running in “reactionary mode” when it comes to the numerous cyber-attacks the nation is continuously facing.

Related:
We should be shocked, shocked, at reports of Russian interference in U.S. elections, by William Greider, The Nation, Aug 3, 2016

Because, you know, it’s not as if Washington has ever done the same thing to other countries. 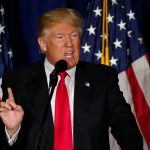 The danger of excessive Trump bashingMultipolarity 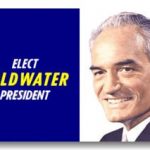