At the U.S. State Department’s daily press briefing on April 26, Deputy Spokesperson Mark Toner was asked the U.S. position on the memorial planned for May 2 in Odessa’s Kolikovo square to mark the second anniversary of the day scores of progressives died there at the hands of a reactionary mob.

The memorial is being organized by the Mothers’ Committee for May 2, which represents family members, friends and supporters of those who died. Several extremist organizations have vowed to disrupt the event.

In response, Toner said the State Department had strongly condemned the massacre of May 2, 2014, supported holding an investigation to bring those responsible “to justice” and condemned threats being leveled against those attending the memorial.

“The most important thing to stress here is that we would obviously support any commemoration of this event … and we would certainly condemn any threats in the run-up to these events,” Toner said.

Under pressure from extreme right-wing organizations with a history of violence, Odessa’s city council had sought a court order banning all gatherings at Kulikovo square from May 1 through May 10. A judge denied the request. However, the ruling also means other groups can gather at the site at the same time.

One organization has informed the city council it plans to hold a rally for the “military-patriotic education of youth” – complete with fireworks and machine guns. The court ruled that those items would not be allowed.

Another organization, called the Brotherhood, has called for a violent attack against those attending the memorial.

Toner’s comments came as a global campaign builds to support the right of the Mothers’ Committee to honor the memories of their family members and to press their demand for an international investigation into the massacre.

As of April 28, more than 150 human rights, peace and justice organizations in 23 countries have signed a Statement of Solidarity calling on the governments of Ukraine, Odessa and the United States to ensure the safety of the Mothers’ Committee’s memorial. The statement also endorses the committee’s call for an international investigation into the massacre, during which at least 46 people died from burns, smoke inhalation, beatings and gunshot wounds. Hundreds more were injured.

To date, not one of the perpetrators has been brought to justice, despite extensive video coverage clearly showing people hurling Molotov cocktails, swinging clubs and shooting guns at the victims.

In addition, UNAC is sending a delegation of peace and justice activists to monitor the Odessa memorial. Other monitors are coming from Bulgaria, France, Germany, Israel, Italy, the Netherlands, Poland, Spain, Sweden and Switzerland, including members of the European Parliament.

Those wishing to support this ongoing struggle for justice, can endorse the UNAC Solidarity Statement at www.unacpeace.org and sign the Mother’s Committee petition at http://odessa2may.wesign.it/en

Interviews with delegation members can be arranged through UNAC Co-Coordinator Joe Lombardo at 1-518-227-6947 or [email protected]. 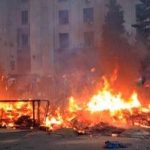 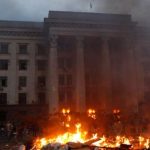 International statement in support of memorial event in Odessa, Ukraine on May 2, 2016Odessa Massacre May 2, 2014, Solidarity with Ukrainian people, Ukraine