NATO member Estonia has held a military parade in border town of Narva, just 300 meters from the Russian border. Tallinn is a long-time critic of Moscow, which it accuses of having an aggressive policy towards the Baltic nation. 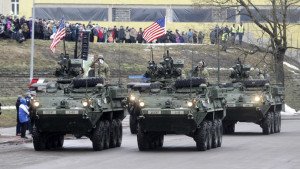 The parade is an obvious snub at Estonia’s eastern neighbor Russia, whom it accuses of pushing aggressive policies in Eastern Europe. The Estonian government is among several vocally accusing Russia of waging a secret war against Ukraine by supplying arms and troops to anti-Kiev forces in the east.

Moscow denies the accusations, insisting that the post-coup government in Kiev alienated its own people in the east and started a civil war instead of resolving the differences through dialogue.

NATO seized the Ukrainian conflict as an opportunity to argue for a military build-up in Eastern Europe, supposedly to deter a Russian aggression. The three Baltic States are among the most vocal proponents of this policy.

Russia sees it as yet another proof that NATO is an anti-Russian military bloc that had been enlarging towards Russia’s border and compromised its national security.

The Estonian government defended its right to hold whatever military maneuvers it wants in its territory. “Narva is a part of NATO no less than New York or Istanbul, and NATO defends every square meter of its territory,” Estonian Prime Minister Taavi Rõivas said in a speech in capital, Tallinn.

Watch:
Estonian and NATO military parade during the daytime of Feb. 23, 2015 in Narva, Estonia, within a few stones’throws of the Russian border (four minutes)

U.S., NATO and Estonian military equipment and soldiers through the streets of Narva, Estonia on Feb. 23, 2015 (six minutes)

U.S. and NATO military equipment and soldiers join evening march through the streets of Narva, Estonia on Feb. 23, 2015