Two new disappointments for the coup planners in Venezuela 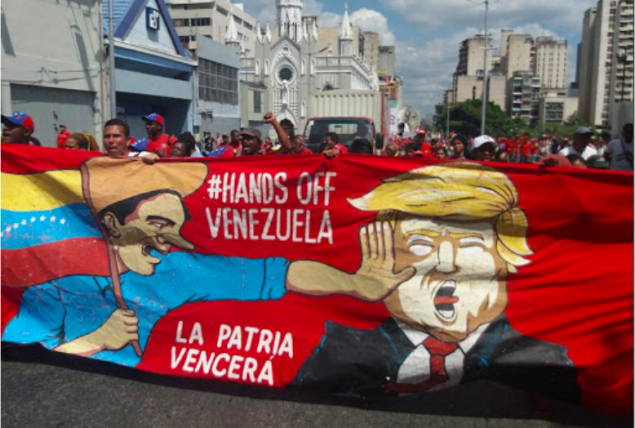 The Venezuelan right continues to face a sustained crisis in their ability to mobilize its social base and the latest actions have been an expression of that weak scene, which cannot be disguised.

Yesterday Caracas witnessed a mobilization called by Juan Guaido and another by Chavismo. What should have been an overwhelming opposition action failed to make an impact and clearly showed the division in the ranks of the opposition, an element that has forced the strategy of the United States to accelerate things.

The Venezuelan right continues to face a sustained crisis in their ability to mobilize its social base. The latest actions have been an expression of that weak scene that cannot be disguised.

March 10 was supposed to be the day to reverse that trend. The call for the mobilization, led by the self-proclaimed President Juan Guaido himself, lasted three weeks with a promise that it was to be greater than previous times. This time it was about reaching the National Assembly, in downtown Caracas, the heart of the national political power.

People gathered in Chacao, in the eastern part of the city, the usual opposition area, around 10 am local time. According to Guaido’s announcement, flyers with instructions on how to mobilize during the day would be handed out during the rally.

“We have to get to the Assembly and occupy it with our President Juan Guaido,” said one young man from the rally point.

However, at 9:30 a.m. the chairs were installed near the concentration point to carry out the National Assembly’s session that Guaido assured he would be presiding over. In other words, while the expectation of going to the seat of the legislature and receiving instructions was maintained, the plan had already been set up that the mobilization would walk a few blocks.

The result was once again a disappointment for those who answered the call of Guaido. The mobilization was small and unconvincing, the headquarters of the National Assembly was always on the other side of the city and Guaido announced, vaguely, that there will be a protest on Thursday, March 12th.

“They don’t have the capacity to mobilize, to organize, they don’t have a proposal (…) it’s a lack of political imagination,” said Diosdado Cabello, president of the National Constituent Assembly (ANC) who was part of the mobilization of Chavism in western Caracas.

It has become a custom that, faced with a call for action from the right, Chavism also calls for a mobilization in the center of the city on the same day. The objective is, in these cases, to demonstrate that there is a government and a political and social force in the streets mobilized in defense of the Bolivarian Revolution.

This time was no exception and the different structures of Chavism were in the center of Caracas in a new show of force.

“The hours to come will be decisive (…) we must be alert because they have in mind an agenda of violence in the country,” said Tania Diaz, vice president of propaganda, action and mobilization of the United Socialist Party of Venezuela (PSUV).

On March 7, there was an incident with national impact occurred when a  fire in the main storage center of the National Electoral Council (CNE)  broke out that caused a column of black smoke visible from a large part of the city.

As many as 49,000 voting machines were destroyed in the fire, among other instruments of the Electoral Power. An armed group named Frente Patriota Venezolano claimed responsibility for the act, which they called Operation Sodom.

A video the group broadcasted later declared that leaders of the Bolivarian process will be military targets and called for war to be waged to the death.

They also claimed responsibility for the February 11 attack in the city of Valencia on the warehouses of CANTV, the state-owned internet and telephone company. The name of that action was, as announced in the video was Operation Genesis.

The last video that appeared from such a group occurred after the attack on two military barracks in Bolivar state, near the Brazilian border, in late December. At that time, a group called Operation Aurora emerged and released a video.

Messages from the U.S.

Not coincidently to all of this, On March 7, U.S. President Donald Trump received Brazilian President Jair Bolsonaro to talk in particular about  Venezuela. Shortly before the meeting, the Brazilian government announced the withdrawal of its diplomatic officials from Venezuela.

Bolsonaro, along with his defense minister Fernando Azevedo e Silva, also met with the head of the Southern Command, Craig Faller, with whom he signed military cooperation agreements.

Days earlier it had been Colombian President Ivan Duque who had met with Trump at a meeting where, they said, they discussed the Venezuela case as well

So the two presidents of the central land countries bordering Venezuela, both right-wingers, aligned with the U.S. strategy, met with Trump to address the situation in Venezuela. These meetings were presented by the coup opposition as a sign that the U.S. government is on the verge of taking further decisive action.

The mobilization on March 10 had an unexpected development when the main leader of the opposition party Democratic Action (AD), Henry Ramos Allup stated that he would participate in the next legislative elections.

“Let’s prepare to go to the elections that must be done according to the Constitution, which are the elections for the National Assembly because this year the period expires. What are we going to do? Are we going to stay seated?” he said from the rally.

His words ratified what was an open secret: one of the central forces that supported the U.S. strategy expressed in the figure of Guaidó took the decision to participate in the legislative elections, that is, to reach an agreement with the government, therefore, recognizing it.

Ramos Allup added that “we are also pushing for presidential elections”, the message was clear and it entails a break with the roadmap held by Guaido, who claims that the only elections should be presidential and without Nicolas Maduro in power.

What was going to be a day of mobilization to the Legislative Power always with a promise of a coup escalation, ended up with a concentration in the east of Caracas, and the announcement of participation in the legislative elections by Ramos Allup.

There are two political lines developing simultaneously. On the one hand, a scenario is under construction to achieve a broad agreement for the next legislative election. The Government and an increasingly wide range of opposition parties and leaders are working on this road map.

Central steps have already been taken in that direction, such as the installation on March 9 of the Electoral Nominations Committee to elect the new electoral authorities, with the participation of deputies from both Chavism and the opposition: the president will be Angel Medina, from the Justice First party, and the vice-president Julio Chavez, from the PSUV.

On the other hand, the time of the overthrow attempt is underway, with Guaido as the national front and with the United States as its leader and funder. This strategy has not yielded favorable political results either in terms of weakening Maduro or in terms of establishing its social legitimacy since the economic blockade does not have the majority approval of society.

So two lines are advancing simultaneously and the second one, the coup plan, needs to stop the accumulation of forces of the first one, the electoral one. In order to do so, it needs to carry out initiatives that achieve an impact, which leads to the hypotheses related to actions of force, like what occurred with the burning of CNE warehouses or the attacks on barracks last December near the border with Brazil.

Venezuela is living through a 2020 turn where the possibility of reaching a majority political agreement that allows for the establishment of a new electoral power and legislative elections is on the table. Achieving that would be a victory for political stability, the keys to the conflict, and a setback for the U.S. plan.