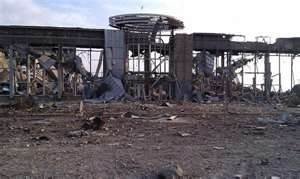 Luhansk airport following its destruction by Ukraine in July 2014

In view of the news last week of the definitive consolidation of the hold of the Donetsk Peoples Republic over the Donetsk airport (contrary to the false reporting by Western media that Ukraine armed forces had defended/retaken/take-your-pick the airport), it is important to recall the destruction of the other important airport in the Donbas region–Luhansk. Here, too, it was shelling and fighting by the Ukraine armed forces which destroyed that airport, last June and July.

Below is five minutes of video footage that was shot at the Luhansk airport last July by UK video journalist Graham Phillips after Ukraine armed forces and militia had been driven out.