Two days after the ‘meltdown of humanity’ in Aleppo, and the world survived

It’s two days after “the complete meltdown of humanity” in Aleppo, Syria and the world lived to see another day. A remarkable ceasefire and evacuation agreement for east Aleppo is holding and being implemented. The “genocide” that Syrian bloggers said would descend, a claim which Western media dutifully repeated, has not come to pass. Imperialism’s ‘regime-change’ plan for Syria has suffered a huge blow, which means freedom-loving people in the world have cause to welcome developments. 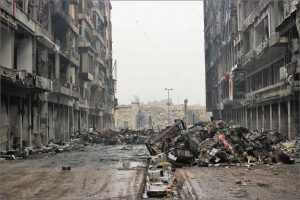 All this sure beats a “complete meltdown of humanity”. That’s the phrase uttered by a purveyor of Human Rights at the United Nations, Rupert Colville, as the defeat of the extremist paramilitaries who have made life hell for the people of Aleppo during the past five years became obvious and inevitable. His phrase became an instant hit among mainstream media headline writers around the world for December 14.

One day later, are the headline writers showing any remorse for their grotesque parody of newsmaking? Don’t hold your breath.

‘Air raids resume as Aleppo ceasefire collapses’ reads the headline of the Associated Press article reprinted in the Toronto Star on December 15. Oops, the editors got tripped up by an apparent case of wishful thinking. A December 13 ceasefire and evacuation agreement for Aleppo got off to a rocky start, but by the following day, it was in full swing.

Like the rest of mainstream media in Canada, the Star has been lamenting the defeat of the right-wing, extremist forces in Aleppo (termed ‘jihadists by some). The laments of state broadcaster CBC have already been described in New Cold War.org. The Globe and Mail daily ran with ‘meltdown for humanity’ for its front page headline on Dec 14 and closed a story the following day with a quote from a UN official: “Aleppo, for 3,000 years, gave to world civilization. And world civilization wasn’t there to assist the people of Aleppo when they needed it the most.”

The December 15 National Post publishes a positively ghoulish commentary inked by right-wing columnist Terry Glavin saying “humanity is disgraced” by its failure to stop the defeat of the extremists in Aleppo. Whose ‘humanity’ is he talking about? Not civilized humanity.

The Dec 15 Guardian article on the situation in Aleppo reports exclusively on the several thousands of people, including rightist military forces, who have opted to evacuate Aleppo westward into the province of Idlib that is controlled by anti-government extremists. The Guardian says 1,000 of them left in a first convoy organized by the International Committee of the Red Cross, on December 14. RT.com is describing the some 5,000 people whose exodus towards Idlib is being facilitated by the Russian military.

Incredibly, Western media rarely mentions the tens of thousands of east Aleppo residents who have made their way to government-controlled western Aleppo, a much larger area of the city compared to the pocket controlled by extremist fighters during the past five years. There, evacuees are being attended by medical and social service staff and directed to lodging with family or friends or to emergency shelters. To Western media editors, these evacuees do not exist or do not matter.

Swedish peace advocate Jan Oberg and UK journalist and Palestine advocate Vanessa Beeley are providing direct reports from Aleppo that are must-reads, as is the rpeorting of Canadian journalist Eva Bartlett.

What is to happen to the relatively small numbers fleeing to Idlib? The good editors in the West decline to inform us. Reuters, at least, provides a glimpse of an answer in this Dec 15 report: “Idlib is already a target for Syrian and Russian air strikes but it is unclear if the government will push for a ground assault or simply seek to contain rebels there for now.”

The New York Times continues to display an in-your-face ‘multimedia feature’ in its online world news section featuring brief, video “last messages” sent via social media by young Syrians in eastern Aleppo in the days preceding the ceasefire. In the videos, they predict their likely and horrible deaths at the hands of the Syrian army.

‘In The Now‘ host Anissa Naouai made an analysis of these “last messages” in her broadcast of December 14. She explained to viewers, “Those ‘final messages’ from Aleppo Syria look more like a coordinated PR campaign.”

Western media has reported that some Syrian forces unhappy with the ceasefire were responsible for gunfire that disrupted the first stage of ceasefire and evacuations. The Times reported from Beirut, “The evacuation began Wednesday morning [Dec 14] but soon collapsed when militia fighters allied to the Syrian government and unhappy with the deal opened fire on vehicles bringing people out, according to opposition activists [emphasis added].”

But one of the few large media outlets actually present in eastern Aleppo says residents deny the allegations. Lizzy Phelan of RT.com talked to a journalist and local residents about the matter. They said they witnessed no such gunfire.

Informed media should have been very attentive to efforts to disrupt another ceasefire because it would be yet another effort by the anti-government paramilitary forces and their foreign overseers to sabotage ceasefire and reconciliation agreements. For example, the bombing of Syrian soldiers by the United States air force in Deir Ezzor in eastern Syria on September 17, 2016 destroyed a then-promising move towards a ceasefire in the country.

Like the Guardian, the New York Times is reporting almost exclusively on those residents and paramilitaries opting to leave Aleppo for Idlib. The Times‘ latest article concludes with a flourish, extolling the jihadist and other right-wing paramilitaries that have occupied eastern Aleppo for the past five years. “Crushing the opposition in Aleppo would be a major strategic and psychological victory for the Syrian government of President Bashar al-Assad and its backers, who have long considered all the rebels to be terrorists bent on destroying the state and have used tremendous, indiscriminate force against areas controlled by the opposition.”

The ‘meltdown’ scare stories came to naught. What was actually taking place in Aleppo was really quite encouraging for an otherwise grim-looking world of imperialist war and militarism and global warming emergency. Where a people courageously defends its sovereignty and opens a path to the future instead of being bombed into the past. Even those Syrians critical of their government’s policies will benefit by the liberation of Aleppo.