ANKARA, Turkey — Two journalists imprisoned for their reports on alleged government arms-smuggling to Syria were released from jail early on Friday hours after Turkey’s highest court ruled that their rights were violated.

A large group of supporters greeted Cumhuriyet newspaper’s editor-in-chief Can Dundar and the paper’s Ankara representative, Erdem Gul, as they emerged from a van after being freed from Silivri prison on the outskirts of Istanbul.

The two were jailed in November, months after the center-left opposition daily Cumhuriyet published what it said were images of Turkish trucks carrying ammunition to Syrian militants. The images reportedly date back to January 2014, when local authorities searched Syria-bound trucks, touching off a standoff with Turkish intelligence officials.

The two were arrested after President Recep Tayyip Erdogan filed a complaint against them, leading to heightened concerns over conditions for journalists and media freedoms in Turkey. The Constitutional Court ruled late on Thursday that authorities had violated Dundar’s and Gul’s personal rights as well as their rights to freedom of expression by jailing them, paving their way to prosecution without being held in prison.

Prosecutors are seeking life prison terms for Dundar and Gul on charges of supporting a terror organization, threatening state security and espionage for publishing state secrets. They are accused of collaborating with a movement led by a U.S.-based Islamic cleric Fethullah Gulen, who has become Erdogan’s top foe.

The prosecutors’ indictment accuses the two of working with the movement to create the image that the government was aiding terror groups and to cripple its “ability to rule.” Government officials accuse Gulen’s supporters of stopping the trucks as part of a plot to bring down the government. The government has branded the movement a “terror organization” although it is not known to have been engaged in any acts of violence.

The journalists’ first trial is set for March 25.

Dundar called the court’s ruling for their release a historic decision for freedom of expression in Turkey. He also said his release Friday would be “a present” on Erdogan’s 62nd birthday.

Last month, U.S. Vice President Joe Biden met with Dundar’s wife during a visit to Turkey in a show of support [sic] for journalists facing prosecution.

The Turkish president’s office has noted that the release of Cumhuriyet daily newspaper editor-in-chief Can Dündar and Ankara bureau chief Erdem Gül does not mark the end of the judicial process, adding that it is “closely following” the case.

“This ruling is not an acquittal. It is a decision for pre-trial release. The case is continuing,” President Recep Tayyip Erdoğan’s aide and spokesperson İbrahim Kalın told reporters at a press conference on Feb. 26, hours after Dündar and Gül were released after 92 days behind bars, following the Feb. 25 ruling by the Constitutional Court that their rights had been violated.

“We want to underline that cases of espionage and leak of information have been held in other parts of the world too. When the Wikileaks incident took place, we saw in Britain and in America what kinds of measures were taken. Julian Assange has been living in Ecuador’s Embassy in London for around three-and-a-half years. Likewise, Bradley Manning is now in jail and was sentenced to 35 years in prison. We also know that Edward Snowden is hiding somewhere in Russia, but we also know that Snowden will be taken to court and given a heavy penalty,” he said.

“When Western countries take measures in similar cases, these measures are defined as part of the fight against terrorism within the framework of the rule of law, or measures taken for the state’s security. Distortion of the same practice in Turkey cannot be accepted. In cases involving state security, the legal process should continue. The [Dündar and Gül] case will continue and of course we will closely follow it,” Kalın said.

Manning, a U.S. Army intelligence analyst who handed over 700,000 classified documents to WikiLeaks in 2010, revealed details about military operations in Iraq, Afghanistan, and the Guantanamo Bay detention camp. He was convicted in 2013 and sentenced to 35 years in prison – longer than most actual spies under the Espionage Act – for the leaks.

In 2013, Snowden, a former National Security contractor from the United States, leaked hundreds of top secret documents of the government’s eavesdropping program. Soon after, he fled the country eventually seeking refuge in Russia.

Dündar and Gül are accused of espionage, threatening state security, and supporting an armed terrorist organization over two stories published in Cumhuriyet about National Intelligence Agency (MİT) trucks allegedly filled with weapons and bound for Syria. The two were arrested by an Istanbul court on Nov. 26 last year, triggering reactions from press organizations, NGOs, and many Western states.[1]

Footage released by daily Cumhuriyet on May 29, 2015, showed gendarmerie and police officers opening crates on the back of trucks that contained what the daily reported as weapons and ammunition to be sent to Syria by MİT in January 2014.

Claiming that the trucks were carrying “humanitarian aid to Turkmens” in the war-torn country, the Turkish government accused followers of U.S.-based Muslim preacher Fethullah Gülen in the judiciary and security institutions of illegally ordering the search.

“By stopping MİT trucks and checking what was inside, they announced it to the world through espionage. What did they say then? They said, ‘These [trucks] are providing weapons for a terrorist organization.’ They exposed the humanitarian assistance that was sent to Bayırbucak Turkmens in this way. They exposed what was sent to the Free Syrian Army [FSA] in this way,” President Erdoğan said on Nov. 28.

Erdoğan and the MİT are the plaintiffs in the case. Erdoğan filed a personal criminal complaint against Dündar and the daily on June 2, 2015, claiming that the story “included some footage and information that are not factual” while saying the person “who wrote the story will pay a heavy price.”

Note by New Cold War.org:
[1] Not a single press outlet in Canada has reported the jailings of dozens of journalists in NATO-member country Turkey, including the cases of Cumhuriyet editors Can Dundar and Erdem Gul. New York Times reporting consists of occasional wireservice stories.

Editorial: Turkey cornered in a dangerous impasse in SyriaTurkey / Türkiye 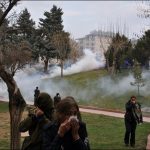