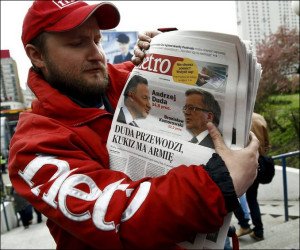 WARSAW—Poland’s presidential election is set for a run off between the conservative opposition candidate and the center-right incumbent, whose departure could lead to a change of political and economic priorities in the European Union’s largest emerging economy.

The challenger, Andrzej Duda, scored a surprise victory on Sunday in the first round of voting, taking 34.5% of the vote, according to a late exit poll. President Bronislaw Komorowski, supported by the center-right camp that has ruled Poland for nearly eight years, had hoped to win the race by an outright majority but came second with 33.1%.

A contentious battle for the country’s presidency is likely on May 24 if the final tally, expected Tuesday, confirms no candidate won more than 50% of the vote. The two candidates have now rushed to woo the voters of former rock star Pawel Kukiz, who came third with 20.5% of the vote, promising to overturn the country’s political establishment.

Poland’s governing class is increasingly unpopular despite two decades of uninterrupted economic growth and stability. Despite this, incomes are low by Western European standards, with the average pretax wage around $1,150 in March. Low wages have contributed to the mass migration of Poles to other EU states.

Distrust with politicians and the system also runs deep. In a bid to regain the initiative, Mr. Komorowski on Monday proposed a referendum onelectoral reform that would introduce single-member constituencies in the hope of creating stronger ties between voters and politicians, one of Mr. Kukiz’s salient campaign themes.

“We need to draw conclusions from the result of yesterday’s vote,” said Mr. Komorowski, a former cabinet minister and house speaker. “One should listen to voters.”

For his part, Mr. Duda, a Member of the European Parliament, said he was open to the possibility of electoral reform to reduce the influence party leaders have on selecting local candidates in parliamentary elections.

Mr. Komorowski, a former Civic Platform member, won the presidency in 2010 and earlier opinion polls forecast he would win comfortably for a second term this year. But considering the poor first-round, he will struggle to retain the presidency after a bland campaign marred by blunders.

For the conservative Law and Justice party, which nominated Mr. Duda, his victory would be the party’s first in a decade. The party was voted out of power in 2007 when the ruling center-right Civic Platform won a parliamentary election.

Mr. Duda’s elevation to president would complicate governance for the ruling party, forcing it to consult on legislation with a hostile president who has veto power. It would also embolden his Law and Justice party ahead of the parliamentary election this year, which the party might win, according to opinion polls.

The unexpected electoral drama may also increase volatility for the Polish currency, said Japan’s Nomura Holdings Inc., which still expects Mr. Komorowski to win. The bank expects risks will mount for the zloty in the longer run. The currency was half a percent weaker to the euro on Monday afternoon, trading at 4.064 zlotys.

Mr. Duda has said he would like to reverse the current government’s earlier decision to increase the retirement age to narrow public deficits. ING bank’s Polish unit said his agenda and the government’s possible inclination to match his spending proposals increase uncertainty and will likely weigh on the zloty in the coming months.

Read also:
Where Poland’s presidential candidates stand on Russia and the war in Ukraine, in Foreign Policy, May 10, 2015
‘Eleven candidates, ranging from anti-clerical left to the monarchist far-right, are running for president. But there is a broad consensus between the two main candidates, Komorowski and Duda: Poland must take a hard line toward Russia and keep up support for the embattled government in Kiev, acting as its advocate in the European Union.‘ 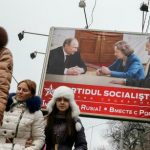