Prize-winning novelist Aslı Erdoğan, who was arrested over alleged links to the outlawed Kurdistan Workers’ Party (PKK) on Aug. 20, has said she is being treated in a way that will leave “permanent physical damage” in the prison where she is detained in Istanbul’s Bakırköy.

Erdoğan is a member of the daily Özgür Gündem’s advisory board and a columnist. She is being held in solitary confinement and says she has been unable to get her necessary medicine for five days.

“They are treating me in a way that will leave permanent damage on my body,” she told daily Cumhuriyet through her lawyer, Nesrullah Oğuz, adding that she is forced to sleep in a bed that someone previously urinated in.

“I’ve been experiencing problems in my intestines for 10 years. My pancreas and digestive system doesn’t work properly, but my medicine has not been given to me for five days. I am diabetic and I need a special nutrition. But in jail I am only able to eat yoghurt … Also, even though I suffer from asthma and chronic obstructive pulmonary disease, I have not been allowed access to open air [since entering prison],” Erdoğan said.

She had experienced health problems while in detention and was taken to hospital before returning to the holding cell. She was later arrested on charges of “membership of terrorist organization” and “undermining national unity.”

Erdoğan added that she is “aware of the solidarity being shown for her” on the outside. “I’m aware that great efforts are being spent. I’m aware of the sincerity and feelings in the messages that I receive. It may sound very vain, but I thank you very much,” she said.

Erdoğan was detained with other employees of Özgür Gündem after a court last week ordered for it to be closed down for allegedly engaging in propaganda of the PKK.

Background:
Urgent call for solidarity over the closure and storming in Turkey of the daily Özgür Gündem, published on the English language website of the People’s Democratic Party of Turkey, Aug 17, 2016

Özgür Gündem former co-chief editor and human rights advocate Eren Keskin has been taken to the Istanbul Courthouse in Çaglayan within the scope of an investigation launched against her on alleged charges of “membership to a terrorist organisation” and “disrupting the unity and integrity of the state”.

Eren Keskin said the following in her testimony:

“Myself and Hüseyin Aykol run the co-chief editorship of Özgür Gündem daily until March 27, 2016. I am writing for this newspaper every 15 days. My position as co-chief editor is completely symbolic.

“Many editors and writers of this newspaper were killed in ‘unidentified’ murders, such as Musa Anter, Ferhat Tepe and Hüseyin Deniz. I became a chief editor of the newspaper in solidarity with seeking exposure of these killings.

“Regarding ‘unidentified’ murders, ‘Saturday Mothers’ and Human Rights Association (IHD) held a meeting at Dolmabahçe Palace with the then Prime Minister and now President Reccep Tayyip Erdogan. I attended that meeting as an administrator of Human Rights Association. Erdogan pledged that ‘there will be no more unidentified murders and perpetrators of all those committed so far will get arrested during our ruling’. This meeting was held in 2014 but I do not remember the exact date.

“I have no authority or activity like determining the editorial policy of this newspaper. I am actively doing my job as a lawyer. For this reason, it is not possible for me to spend many working hours on this newspaper. I am writing for this paper mainly on human rights and violence against women. I am not informed of the articles written by PKK/KCK executives with pseudonym. I am a human rights defender and I have never been member of any organisation so far. I have never been investigated on charges of ‘membership to a terror organisation’. In addition, I am not an executive of the newspaper and I do not accept the accusations directed at me.”

Lawyer and human rights activist Eren Keskin, formerly the co-editor of the Özgür Gündem newspaper, was released by an Istanbul court under judicial supervision after testifying on Thursday.

A detention warrant was issued for Keskin after the closure of the newspaper on Aug. 16, and the daily’s editor-in-chief, Zana Bilir, and Managing Editor Inan Kizilkaya were arrested by an Istanbul court on Tuesday on charges of “membership in an armed organization” and “disrupting the unity and integrity of the state.”

Speaking in front of the Istanbul Courthouse after her release, Keskin told reporters that the detention warrant was not related to any of her articles in Özgür Gündem but said she thinks it involved her serving as co-editor of the daily for a short period of time.

A Turkish court ordered the interim closure of Özgür Gündem on Aug. 16 for allegedly having links to the terrorist Kurdistan Workers’ Party (PKK), which has been waging a war against the state, and for spreading “terrorist propaganda” on their behalf.

402 arrested, 293 detained during operations on Thursday

Hundreds more arrests in Turkey on August 25, 2016 as purge continues of state and public institutions (photo on Turkish Minute)

A huge cleansing of Turkey’s state and other institutions is continuing as people from all walks of life find themselves being hunted down and taken into custody. At least 402 people were arrested, while 293 others were detained over the past 24 hours, according to Turkish news agencies. Meanwhile, 154 academics and university staff were suspended along with 39 public servants in three provinces.

The victims of Thursday’s operations carried out as part of the massive purge have been added to the already-huge group of people who have been either detained or arrested since July 15.

Turkey survived a military coup attempt that killed over 240 people and wounded a thousand others, on July 15. Immediately after the putsch, the government along with President Recep Tayyip Erdogan pinned the blame on the Gülen movement and launched a widespread purge aimed at cleansing sympathizers of the movement from within state institutions, dehumanizing its popular figures and putting them in custody.

Some 82,000 people have been purged from state bodies, nearly 40,000 detained and 20,000 arrested since the coup attempt. Arrestees included journalists, judges, prosecutors, police and military officers, academics, governors and even a comedian. 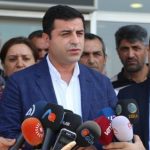 Selahattin Demirtas speaks on the massacre in Gaziantep of Aug 20, 2016Turkey / Türkiye