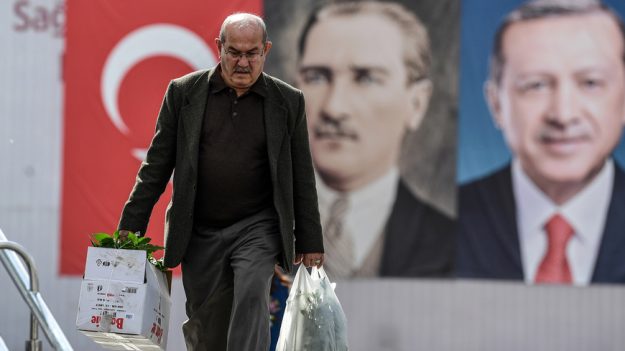 A man walks in front of the portraits of Turkish President Recep Tayyip Erdogan (R) and founder of modern Turkey Mustafa Kemal Ataturk (L), on May 11, 2018 at Emininonu district in Istanbul. -(Photo by OZAN KOSE / AFP/Getty Images)

Ahead of Turkey’s June 24th elections, both the ruling party and the opposition have pledged various incentives and social welfare benefits ahead of next month’s vote. President Recep Tayyip Erdogan had called snap elections in Turkey for June 24, bringing the polls forward by over a year and a half after a call from his main nationalist ally on April 18, 2018. But behind the ‘promises auction’, unresolved economic problems loom

The pledges Turkish politicians are making to voters ahead of the June 24 presidential and parliamentary polls have come to resemble an auction.

The ruling Justice and Development Party (AKP) started with enacting a 24 billion lira ($5.6 billion) incentives package, which bears directly or indirectly on almost the entire population. In addition, the government plans to spend 38 billion liras on various social welfare benefits this year.

Opposition parties have raised few objections to such spending, wary of alienating millions of voters, mainly pensioners and poor people, who are the primary beneficiaries of such assistance. Let alone objecting to the payouts, the opposition is making its own generous pledges.

Commenting on a government plan to give pensioners two bonuses of 1,000 liras this year, Kemal Kilicdaroglu, the head of the main opposition Republican People’s Party (CHP), said earlier this month that “pensioners deserve more.” During the parliamentary debate on the bill, the CHP submitted a proposal to raise the bonuses to 1,604 liras each, the equivalent of one month’s minimum wage. CHP lawmaker Tuncay Ozkan was eager to point out on Twitter that AKP deputies rejected the proposal.

The CHP plans to unveil new pledges May 24. The talk in parliamentary corridors is that the party will pledge to raise the monthly minimum wage to more than 2,000 liras and give pensioners two bonuses per year that are each equivalent to one month’s minimum wage. The CHP also wants to convert existing material aid to the needy, such as food and coal for heating, to cash assistance. Diesel subsidies for farmers and tuition-free education are two other pledges expected in the CHP’s election manifesto.

In the presidential race, CHP candidate Muharrem Ince pledged two 500-lira stipends per year to young people, arguing that slashing the current lavish spending of the presidency will be enough to cover the cost. He also promised annual scholarships for 10,000 students to study at prestigious institutions abroad as part of a drive to stimulate scientific progress in the country.

Meral Aksener, the chair and presidential nominee of the Iyi or Good Party, pledged a comprehensive debt relief scheme that covers some 4.5 million people struggling to repay consumer loans and credit card debts, including complete write-offs for unemployed people, pensioners, minimum-wage earners, former members of the security forces who have suffered disabling injuries in the line of duty and the families of fallen soldiers and police. She also promises to significantly cut the price of diesel for farmers to 1.5 liras per liter from the current 5.06 liras.

On May 12, President Recep Tayyip Erdogan’s ally, Devlet Bahceli, the head of the Nationalist Action Party (MHP), went as far as to call for a widespread amnesty for Turkish prisoners (excluding child abusers, rapists, murderers of women, Kurdish militants, and followers of Fethullah Gulen, whom Ankara accuses of instigating the 2016 coup attempt). According to the daily Haberturk, some 165,000 prisoners, including many convicted of murder, assault and drug trafficking, fall into the scope of Bahceli’s amnesty call. Several crime bosses known to be close to the MHP’s nationalist ideology would also be given amnesty. For now, both Erdogan and Prime Minister Binali Yildirim have given the cold shoulder to the amnesty proposal.

In early June, pensioners will receive the first of the two bonuses the government has promised just weeks before going to the polls. The government is also targeting the influential youth vote by announcing an amnesty of an unprecedented scope: Around 680,000 students who have been dismissed for various reasons over the years will be permitted to return to their universities. In addition, the government has written off late fees for 300,000 students repaying higher education credits.

In another pre-election move, the Health Ministry has announced a plan to recruit 27,000 new employees.

The wide range of pledges and incentives shows that both the government and the opposition expect a close race. Hence, any card that could tip the scale is being put into play. On May 7, Yildirim announced a campaign to revitalize sales in the stagnant housing sector. As part of the campaign, public lenders Ziraat, VakifBank and Halkbank, as well as the private Sekerbank, cut monthly interest rates on housing loans to 0.98% from between 1.23% and 1.35%.

The government also apparently sees major international projects as another trump card. The inauguration ceremony of the Trans-Anatolian Natural Gas Pipeline, which will carry Azeri gas to Turkey and on to Europe, has been brought forward from July to June 12, before Turks go to the polls.

Selahattin Demirtas, the imprisoned presidential candidate of the pro-Kurdish Peoples’ Democratic Party (HDP), has sought to communicate his pledges via Twitter, with the help of lawyers who visit him in jail. His promises include monthly stipends of 600 liras for young people, pensions of at least 3,000 liras for retirees, and monthly assistance of 1,000 liras for about 1 million elderly people who are ineligible for pensions.

While political rivals compete on the spending front, they lack the same enthusiasm in explaining how they will finance their projects. The generous pledges belie a country in the grips of serious economic woes, including a big current account deficit, unrelenting inflation, a tumbling currency and budget deficits.

Any penny spent outside the budget adds to inflation and interest rates, leading, ultimately, to price hikes for consumers, especially on food items. In April, consumer inflation was up 10.85% from the same period last year, while producer inflation hit 16.37%. The Turkish lira has lost 12% of its value this year, and the main index of the Istanbul stock exchange has tumbled badly as well. The yield on two-year bonds has exceeded 16%. The 12-month current account deficit stands at $53.3 billion, which is the yearly sum of hot money Turkey needs to find to keep its economy glued together.

How the election pledges will be financed is hard to explain. The central government budget was already running a deficit of 20.4 billion liras in the January-March period, before the government called the snap polls and further loosened the purse strings.

To cut a long story short, the election pledges are detached from the realities of the Turkish economy. And voters are well aware of this. As one pensioner, Mahmut Guc, told Al-Monitor, “We are going to get the first bonus because it is before the elections, but I am rather pessimistic about the second one.” A hail of price hikes is what many voters expect after the polls.

Mehmet Cetingulec is a Turkish journalist with 34 years professional experience, including 23 years with the Sabah media group during which he held posts as a correspondent covering the prime minister’s and presidential offices, economy news chief and parliamentary bureau chief. For nine years, he headed the Ankara bureau of the daily Takvim, where he also wrote a regular column. He has published two books.
Editors’ Note: While we don’t necessarily share the views we publish on New Cold War, we do attempt to provide readers with a range of views. This is because your right to make your own mind up depends on your being fully informed.
Share
Tweet
Share
Pin