Four Turkish academics are facing trial in Istanbul, charged with spreading “terrorist propaganda.” Their alleged crime was to denounce the renewed conflict with Turkey’s Kurds. Supporters have gathered outside the court in Istanbul. 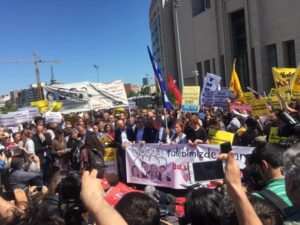 The four academics – Esra Mungan Gursoy, Meral Camci, Kivanc Ersoy and Muzaffer Kaya – were part of a group of more than 1,000 scholars who signed a declaration in January that was critical of the Turkish government’s military intervention into the predominantly Kurdish southeast of the country. The Turkish President Recep Tayyip Erdogan did not take kindly to the signing of the petition and opened legal proceedings against some of those who signed the document.

A two and one half year ceasefire between the Kurdistan Workers Party (PKK) and Ankara was shattered in July 2015. Kurdish militants are fighting for the right to self-determination and greater autonomy for Kurds – demands that Ankara rejects.

According to government figures, since July 2015 almost 400 soldiers and police and several thousand militants have been killed in the conflict which has largely take part in the southeast of Turkey. Opposition parties say between 500 and 1,000 civilians have also been killed in the fighting.

Meanwhile in a separate courtroom, the trial against two editors with the Cumhuriyet daily is continuing. They are charged with spying and aiding a terrorist organization. Can Dundar, editor-in-chief of the newspaper, and Ankara bureau chief Erdem Gul are facing life in prison after they published information Last May alleging the Turkish government was complicit in ferrying arms shipments into Syria.

Hundreds of protesters have gathered outside the court in Turkey’s largest city to protest the two trials, which demonstrators see as an erosion of free speech being carried out by the Turkish government.

“In short, journalism is in a coma in Turkey,” Dr. Y. Alp Aslandogan, a Board Member of the Gulen Institute, told RT. “Erdogan’s administration doesn’t seem to tolerate any criticism at all. It is impossible to do real journalism in Turkey right now.”

“Any journalist, [if] they criticize Erdogan, risks being imprisoned and legally harassed. Zaman daily was the largest circulating newspaper in Turkey and it is now assigned to a government trustee. It was essentially a politically motivated government takeover. The next day a paper which was critical of Erdogan became Erdogan’s mouthpiece,” he added.

Ankara has also been heavily criticized by the European Parliament for its record on human rights and media freedoms.

“(Lawmakers) urge Turkey to act against intimidation of journalists in all its forms, condemn its violent and illegal take-over of several newspapers … and highlight its serious backsliding on freedom of speech,” the parliament said, as cited by Reuters.

Turkey goes out of control, by Christopher de Bellaigue, New York Review of Books, March 6, 2016, reviewing three new books on politics in Turkey. Published in the print edition of NYRB on April 3, 2016, available to subscribers only. Excerpt:

… Erdoğan’s AKP government and the Gülen movement share a modernizing Islamist ideology, and although relations between them have been deteriorating for some time, before the current crisis it was possible to be affiliated with both. Coexistence ended abruptly on December 17, when more than fifty pro-AKP figures, including the head of Halkbank, a state-owned bank, a construction magnate, and the sons of three cabinet ministers, were taken in for questioning by prosecutors who are regarded as Gülen’s men.

The raids were allegedly carried out by Gülenist policemen and they were given much attention by newspapers and TV stations with a similar pro-Gülen bent. Allegations that the well-connected detainees were guilty of bribery, smuggling, and other crooked activities were tweeted and retweeted in a frenzy of condemnation; the Gülenist assault from within the government as well as outside it had been well planned. Incriminating evidence was indeed uncovered, including some $4.5 million kept.

The speed and vigor of Erdoğan’s reaction to these events indicate that he regarded them as a precursor to his own destruction. He immediately began clearing out compromised or potentially traitorous members of his entourage, and within a few days had replaced half his cabinet, including those members whose sons had been taken into custody. The purge has spread to far points of the civil service. As part of Erdoğan’s campaign against the influence of Gülen, thousands of policemen have been moved from their posts, as well as senior prosecutors involved in the corruption case, and bureaucrats associated with the departed ministers have also been shuffled or dismissed.

Earlier in February, the government began investigating Gülenist police officers on suspicion of “forming an illegal organization within the state.” Erdoğan stopped the judicial investigations and instead took direct action. Two months shy of municipal elections, and six months away from a presidential election he hopes to contest, he survives. But the political tradition he represents, a synthesis of Islamism and the free market, is hurt, the prime minister has been badly damaged, and there will be more damage to come.

Before the Erdoğan–Gülen confrontation started to show itself, in early 2013, and certainly before last summer’s nationwide protests, when Turkish liberals took to the streets against their authoritarian prime minister, Turkey’s modernizing Islamist current enjoyed much goodwill…

Gülen: The Ambiguous Politics of Market Islam in Turkey and the World is by an American sociologist, Joshua Hendrick, who worked for seven months as a volunteer editor at a Gülen-affiliated publishing house in Istanbul. As someone who recently spent a couple of days in the company of Gülenists, and who found their beaming, radiant, unswervingly solicitous manner perplexing at first, and then somewhat wearing, I can only admire Hendrick’s longevity. It has paid off, for this is a helpful and detailed account of a movement that is defined, if such a thing is possible, by obfuscation… 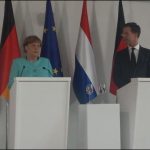