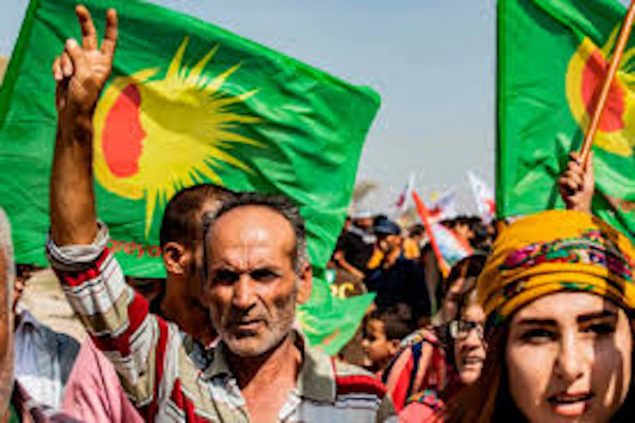 Turkey’s invasion of northeast Syria is likely to torment Syrian Kurds, who face a chaotic, all-out war, the loss of their widely praised governance model and ethnic cleansing that could spur generations of hostilities.

Turkey’s invasion of northeast Syria is likely to torment Syrian Kurds, who face a chaotic, all-out war, the loss of their widely praised governance model and ethnic cleansing that could spur generations of hostilities.

“It’s going to be very bloody and a disaster for Western policy in the area,” said Wladimir van Wilgenburg, co-author of “The Kurds of Northern Syria”. “There’s going to be, most likely, large refugee flows and it’s going to affect the whole region.”

As of early Thursday, the Syrian Observatory for Human Rights reported that at least 16 fighters from the Kurdish-led Syrian Democratic Forces (SDF) and six Turkish troops had been killed in clashes.

Most analysts have said they expect a limited incursion from Turkey. But Van Wilgenburg said he saw two reasons why Turkish forces might advance deeper into Syria: Turkey’s oft-stated objective is to eliminate any Syrian Kurdish entity along its border, and a limited incursion would not achieve that goal; and Turkey President Recep Tayyip Erdoğan likely intends to use the offensive to gain leverage to use in his meeting with U.S. President Donald Trump in Washington next month.

“It would be logical for Turkey to take as much territory as possible in this very small time frame,” Van Wilgenburg told Ahval during a podcast.

Micha’el Tanchum, senior fellow at Vienna-based think tank the Austrian Institute for European and Security Policy, saw another reason Turkey’s offensive might be more ambitious than most expect. He pointed out that Turkish citizens have become increasingly frustrated with the presence of some 3.6 million Syrian refugees.

“The (Justice and Development Party) AKP-led government cannot return to its voter base without having transferred Syrian refugees. This means a long-operation,” he said, adding that Turkish forces are already stretched thin, maintaining positions in Syria and Iraq along with its presence in southeast Turkey.

Turkey sees the Syrian Democratic Forces (SDF), the main fighting force in the U.S.-led coalition to defeat the Islamic State (ISIS), as an extension of the Kurdistan Workers Party (PKK), which has led an armed insurgency in southern Turkey for decades and is labelled a terrorist group by Turkey, the United States and the European Union.

“Turkey has no shortage of adversaries who would quietly fund and supply a guerrilla campaign (in northeast Syria),” said Tanchum. “However, the greatest threat would be concurrent guerrilla campaigns against Turkey in northern Syria and southern Turkey.”

In preparation for conflict with Turkey, the SDF, and its affiliate militia the People’s Protection Units (YPG), have been honing their guerrilla tactics in recent days. The SDF issued a general mobilisation on Wednesday in the autonomous region of Rojava, the Kurdish name for the region, urging civilians to head toward the border “to carry out their moral duty and show resistance”.

Local journalist Baderkhan Ahmad reported on Twitter that Turkish air strikes hit a home in Qamishli on Wednesday, killing one woman and injuring a man and his children, as well as a prison holding ISIS fighters. Ahmad also reported that local civilians were armed and awaiting Turkish forces.

Much of Rojava, where Van Wilgenburg has spent considerable time in recent years, has been free from the violence and instability faced by the rest of Syria during the nine-year civil war. That is largely because of the governance system put in place by Syrian Kurds in Rojava, an administrative region that stretches from the River Euphrates to the northeast, and the subject of Van Wilgenburg’s book.

Though it has its shortcomings, many Western analysts point to Rojava as a largely successful experiment in democratic governance for this region. It is staunchly secular, championsfeminist ideals, and stands out in terms of social equality, ethnic pluralism, and anti-sectarianism. Some even see it as a possible model for the Middle East.

“It depends what you compare it to,” said Van Wilgenburg, explaining that Rojava is not a good model for Europe, but it is for Syria and most of its neighbours. “We did surveys and a lot of people talked about the importance of women’s rights in that area, that’s sort of a revolutionary concept (there).”

Now the Middle East is likely to lose that model, and perhaps much of the Kurdish presence in northeast Syria. Erdoğan has made clear his plan to clear out the Kurds and move up to 3 million Syrian refugees from Turkey into the zone, though Ankara has said this would not be demographic engineering.

“It would be basically ethnic cleansing,” said Van Wilgenburg, pointing to what has happened in Afrin since the northern Kurdish city was taken by Turkish forces in January 2018.

More than 140,000 people, mostly Kurds, have been displaced, and a United Nations reportdocumented kidnappings, abductions, torture, extortion and assassinations by Turkish-backed Syrian rebels. Several of those same rebel groups are reported to be taking part in this invasion as well.

In Western media outlets, the dominant reaction to the US pull-out has been that this is a stunning betrayal of the Syrian Kurds, particularly the SDF. In compliance with the U.S.-Turkey safe zone plan, the SDF last month removed their heavy weapons from areas along the border with Turkey and took down their fortifications. Observers have said the Syrian Kurds now face a bloodbath, war crimes, genocide and the creation of hostilities that could last generations.

Trump said in a tweet on Tuesday that the United States had not abandoned the Kurds, adding that the U.S. administration still supplied financing and weapons. He also repeated his vow to destroy Turkey’s economy if it were to act aggressively against the Kurds.

Then on Wednesday, the U.S. president told reporters that the Kurds “didn’t help us in the Second World War, they didn’t help us with Normandy”, according to the Guardian. Also on Wednesday Trump issued a statement: “The United States does not endorse this attack and has made it clear to Turkey that this operation is a bad idea.”

Betrayal, unfortunately, is nothing new for the Kurds, who have a popular saying that they have “no friends but the mountains”. “They were not completely naive, but at the same time they thought the U.S. was committed to supporting the SDF,” said Van Wilgenburg.

There has been talk of the SDF reaching some sort of protection agreement with the Syrian government, but SDF commander Mazlum Kobane told the New York Times on Tuesday that his forces would fight back.

Reports emerged on Wednesday of Syrian Kurdish civilians staging massive sit-ins along the border to act as human shields to defend their territory from Turkish forces. Those who stay in the area face kidnapping, arbitrary arrest and getting caught in the crossfire, according to Van Wilgenburg, who expects most Kurds to flee once heavy clashes begin.

“They have seen what happened in Afrin, they are not stupid,” he said. “They know what is going to happen.”

David Lepeska, a freelance journalist, has been writing about Turkey for years. Lepeska reported from inside Turkey, including Kurdish southeast between 2013 and 2016.