Turkey’s mobsters step out of shadows and into public sphere

After decades in hiding, in prison or keeping low profile, players from a bloody period in the country’s history are now seen as ‘folk idols’ by the Turkish right 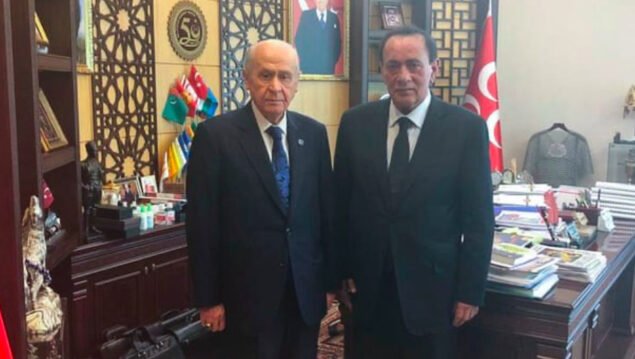 On the left is Devlet Bahçeli, an ultranationalist, and on the right is Alaattin Çakıcı, the most notorious mobster in Turkey. Photograph: @alattincakici Twitter Account

At first glance, the photograph of two smartly dressed older Turkish men, posing for the camera in an office filled with flags, could be of any important figures in the country – but it is rare for a picture to say so much about both the past and the future.

On the left is Devlet Bahçeli, an ultranationalist political dinosaur who has in the past few years become an influential coalition partner in the government of Turkey’s president, Recep Tayyip Erdoğan.

The man on the right, Alaattin Çakıcı, is the most notorious mobster in Turkey. Accused of 41 political murders, and jailed for ordering a hit on his ex-wife, who was shot dead in front of their young son, he was nonetheless freed from prison along with dozens of other mafia heavyweights in a coronavirus amnesty last year that notably ignored political prisoners.

The Turkish mafia’s sudden rehabilitation in public life has taken a hold on the popular imagination. It also suggests a new political climate is emerging in which the state at best tolerates, and at worst, embraces, previously shadowy figures.

Bahçeli and Çakıcı’s particular friendship stretches back decades. Both rose to prominence in the late 80s as members of the Grey Wolves, a neo-fascist paramilitary group which today functions as the youth wing of Bahçeli’s Nationalist Movement party (MHP) and denies any political or violent activity.

That period in Turkish history is dark and bloody, characterised by violence between far right organisations like the Grey Wolves and leftist groups such as the Kurdistan Workers’ party (PKK).

During these years, Turkey’s intelligence agency partnered with the mafia to carry out political assassinations – an arrangement exposed in spectacular fashion in a 1996 car accident which killed an MP, Istanbul’s deputy chief of police, and Grey Wolves leader Abdullah Çatlı, all of whom were travelling in the same vehicle.

After decades spent in hiding, prison, or keeping a low profile, players from this era are making a bold re-entry into the public sphere.

Çakıcı himself has sent death threats to the leader of the main opposition party while paying visits to other political figures and boasting about friends in high places on social media. He also popped up in an Instagram shot alongside a former interior minister and senior army officials in the resort town of Bodrum in October, in a picture posted by a wealthy businessman with ties to Erdoğan’s ruling Justice and Development party (AKP).

Broad daylight attacks on a politician, journalist and lawyer critical of the MHP by men with sticks and guns in Ankara last month also had uncomfortable echoes of the lawlessness of the 80s.

According to Ryan Gingeras, a professor at the Naval Postgraduate School in California and author of Heroin, Organised Crime, and the Making of Modern Turkey, however, the political context today is very different.

“The reemergence of real-life mobsters such as Çakıcı doesn’t represent a return of the mafia so much as the way in which these men have become folk idols on the Turkish right,” he said.

“What these throwback characters do tell us, I think, is that there’s a new political environment developing in Turkey – one in which these men have been absolved of their past crimes, and it’s becoming clear for the AKP that embracing the MHP’s hard nationalist stance at the very least doesn’t harm their political project. It may even help.”

Bahçeli’s previously fringe party is a problematic ally for Erdoğan. The AKP and MHP believe in different types of nationalism – the former Islamist, the latter secular – leaving them at odds on several important domestic and foreign policy issues.

But one of the most significant ways in which Turkey’s political alliances were transformed in the aftermath of the coup attempt in 2016 appears to be the rebirth of the Turkish far right as a prominent political force. Having alienated most other potential political partners in the last 20 years, and as the AKP’s popularity continues to wane, the president now has little choice but to stick with MHP if he wants to hang on to power.

The AKP itself is also no stranger to corruption and criminal scandals. The growing prominence of MHP and its unsavoury friends has left some wondering whether Turkey may yet turn into a bona fide mafia state.

Bethan McKernan is the Turkey and Middle East correspondent for the Guardian.