Turkey’s local elections in the international media: a tense night for Istanbul 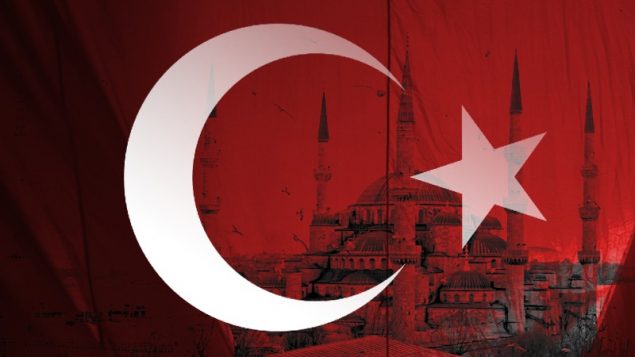 A look at the western media’s responses to Turkey’s local elections on March 31, for which some results are still being counted, a full seven days after the event, under the eye of The Supreme Election Board (YSK).

On March 31, Turkey`s local elections took place with 57 93 985 voters participating. In Istanbul, an area of critical importance for all parties, updated data from Anadolu news unexpectedly ceased to appear, leading to a tense waiting period for both the population and participants. The following morning, the Chairman of the Turkish Central Election Commission (CEC) Sadi Güven declared that opposition candidate Ekrem İmamoğlu of the Republican People’s Party (CHP) had won the race for mayor of Moscow. He received  4,159,650 votes, while Binali Yildirim, the representative of the ruling Justice and Development Party (AKP), received 4,131,751. İmamoğlu soon after declared himself Mayor of Istanbul across social media networks.

On April 2, the Justice and Development Party filed an appeal to the CEC on the preliminary results of the elections in Istanbul.

CHANGE OF POWER IN 25 PROVINCES

According to the unofficial results of the municipal elections, a change of government took place in some 25 provinces. The Nationalist Movement Party (MHP) won a number of provinces. The elections were held for the first time within the framework of party coalitions, which may partially account for the changes. The liberal-conservative Good Party, meanwhile, didn’t manage to claim any independent victories. In the Turkish capital Ankara, for the first time in the last 25 years, a change of power took place- Mansur Yavash of the CHP was elected mayor. Thanks to an alliance with the Good Party and the HDP, the CHP also managed to win elections in Central Anatolia region. The pro-Kurdish Peoples Democracy Party (HDP) lost power to the AKP in Şırnak, Ağrı and Bitlis.

Early in the morning, CHP candidate Tunç Soyer announced victory in his campaign for mayor of Izmir, while opposition Alliance of the Nation party representative Mansur Yavas won in Ankara. A few hours later, it was reported that the CHP’s Ekrem Imamoglu and the representative from the Alliance of the People bloc Binali Yıldırım were within 4,000 votes of one another in the race for mayor of Istanbul.

MHP – WINNER WITHIN THE “PEOPLE`S ALLIANCE”

According to unofficial data from Anadolu, the AKP, which won 53 provinces in 2014 including the capital, won in 31 of 40 provinces in the March elections. Despite the fact that the AKP and MHP participated in elections within the framework of the People`s Alliance in the Kütahya, Çankırı, Kastamonu, Amasya, Bayburt, Erzincan and Karaman provinces, each of the parties nominated their own candidate. In these areas, the representatives of the MHP ended up winning.

President Recep Tayyip Erdoğan made a speech during the day in front of the central headquarters of the AKP in Ankara, saying: “The people, for the 15th time, have given their vote to us. Most cities were won by AKP candidates or representatives of the People’s Alliance.”

Meanwhile, public attention was attracted to the fact that the president did not claim that the AKP had won in Istanbul.

HOW INTERNATIONAL MEDIA COMMENTED ON THE ELECTIONS IN TURKEY

Internet portal Odatv.com has curated articles from leading international publications regarding Turkey’s municipal elections. Among collected articles, there are two major recurrent themes: the election results “indicate the defeat of Erdoğan and his party”, and “voters dissatisfaction with the economic situation in the country strongly affected election results”.

An article in the British Guardian newspaper expresses the viewpoint that the elections were a critical test of President Erdoğan’s authority. 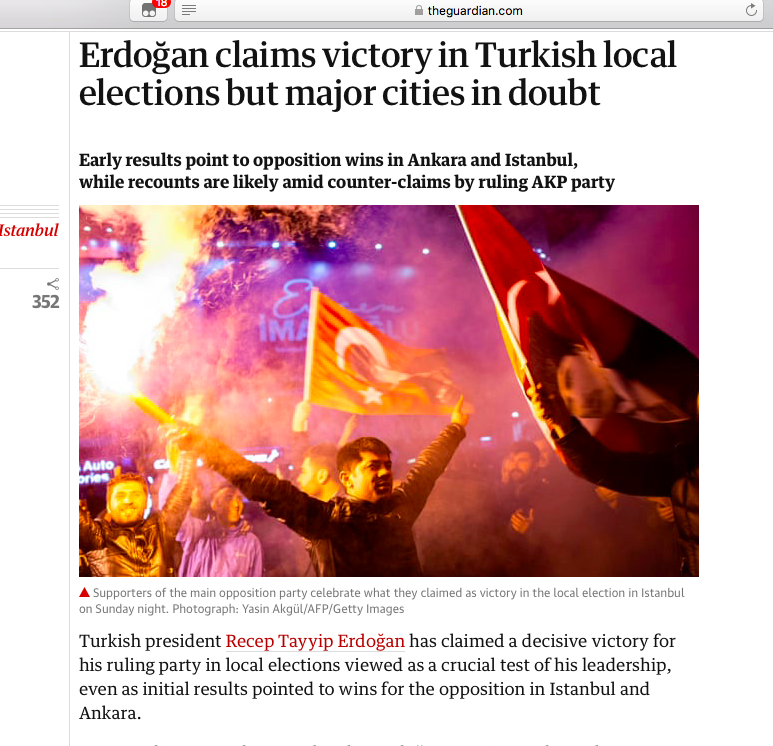 The publication notes that the seemingly mediocre municipal elections in Turkey actually “morphed into a referendum on Erdoğan’s 16-year rule as the country’s economic woes began to bite into his popular support.”

The Guardian also noted that preliminary election results indicate the first serious defeat of the AKP since it came to power in 2002. Erdoğan’s power during that time was associated with significant economic growth. However, last year’s decline in the lira led to an all out recession last month. Inflation increased almost 20 percent, while the working class of the AKP electorate struggle with high costs of living.

Despite the fact presidential nominations were not on the ballot, in the weeks leading up to the elections, Erdoğan held rallies tirelessly, trying to divert voter attention from economic crises.

“He framed the local elections as a matter of “national survival”, accusing opposition parties of links to terrorism and blaming inflation on foreign powers seeking to undermine the country. Sunday’s elections also marked the first ballot-box test for Erdoğan since he won re-election last year under a new system of government that gave the presidency expanded powers,” the Guardian wrote.

THE PRESIDENT CAN REMAIN CALM… FOR NOW

The Guardian also notes that the opposition had successfully calculated they would be able to swing former AKP voters over who are dissatisfied with rising inflation and unemployment.

The newspaper did note the point of view of continued AKP supporters who believe that “Erdoğan’s strong leadership is exactly what will help Turkey weather its financial crisis.”

The Financial Times, in its review on the results of the elections, wrote: “The president may find some comfort in the fact that his ruling alliance won more than 50 per cent of the national vote, according to early results. But losing a succession of big urban centres means ceding control of the network of patronage that comes with them, including lucrative contracts and jobs.” 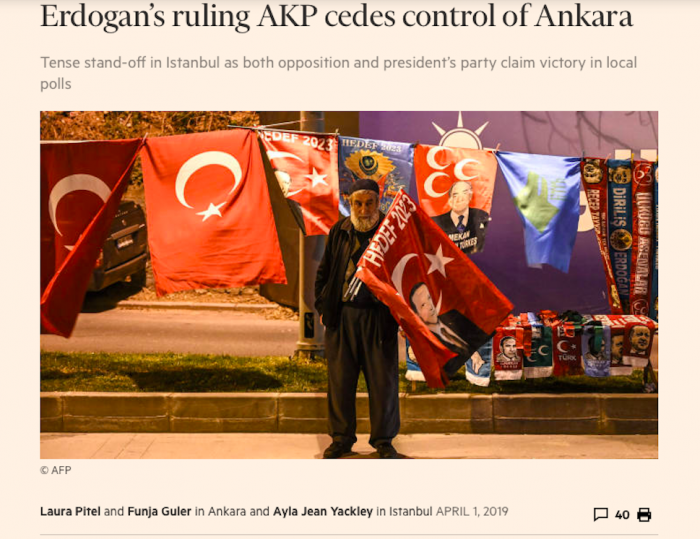 The New York Times said that the preliminary results of the vote point to the defeat of Erdoğan in Ankara and Istanbul, signalling a serious setback for the ruling party of Turkey.

“For the first time in his political career, Mr. Erdoğan was tasting defeat not only in mayoral races in the center of Turkish political power, Ankara, but his hometown, Istanbul, the country’s business center… If Mr. Erdoğan’s candidate loses the Istanbul race, it would be a severe blow to his party, which after 17 years in power has been showing a decline in popularity.” 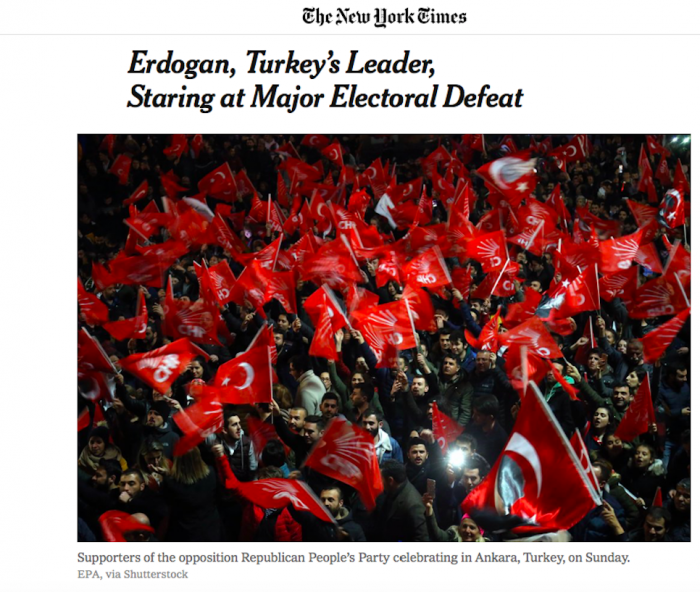 The article emphasizes that one of the issues most troubling voters in Turkey is the declining economic situation: “Even pro-government newspaper columnists warned that corruption and cronyism in the municipalities were turning voters away from the ruling party. Opinion polls showed that a larger percentage of voters than usual remained undecided right up to the election, which officials of his party took as a sign of unhappiness among the electorate.”

Opposition candidates promised voters much desired change, the provision of new jobs, educational reforms and a well-designed social program. Some of them in their election speeches sharply criticized Erdoğan’s policies.

Local elections do not generally attract much attention from the world community… Nonetheless, the mayors of cities, and city and district administrations are very important for Erdoğan’s power, according to the Times.

The publication also notes that Erdoğan began his political career from the post of mayor of Istanbul, and managed to enlist the support of the population thanks to the development of municipal services such as garbage collection and the establishment of public transport infrastructure.

According to the New York Times, the victory of the MHP in Ankara and several other major cities is a serious failure for President Erdoğan, who led an active election campaign for his party, and that the loss reflects voters’ dissatisfaction with his economic policies.

According to the Turkish BBC, the local elections were a kind of national referendum for Erdoğan after his presidential victory last June. Since then, for the first time in more than 10 years, the Turkish economy entered a recession. This situation, in turn, forced the government to pursue unattractive policies for investors, as well as raising prices. Against a background of escalating internal tensions due to increased pressure on opposition forces after the coup attempt in 2016, Turkey’s relations with its Western allies have deteriorated. This led to the instability of the lira and increased investor concerns. According to the BBC, the Trump administration is closely monitoring the situation in Turkey, and hopes that after the completion of the electoral process, negotiations with Ankara on issues such as the war in Syria and the purchase of Russian air defense systems will come to an end.

THE RESULTS OF ELECTIONS ARE A STRIKE AGAINST ERDOGAN’S AUTHORITY

The topic of the municipal elections in Turkey also attracted the attention of the French newspaper Le Monde.

The publication described the defeat of the AKP in Ankara and Istanbul as a “blow” to the authority of President Erdoğan. According to Le Monde, the defeat of the ruling party in the capital indicates a serious failure for Erdoğan, who has won every election since 2002, when the AKP first came to power. Like Istanbul, Ankara has been under the control of Erdoğan’s party and the preceding Islamist political structures for 25 years.

65-year-old Erdoğan, having held 102 campaign rallies in 50 days, did everything possible to convince voters to cast their votes for the ruling party. Despite the fact that the coalition created by the AKP got 51 percent of the vote, it still lost the race in major provinces like Ankara, Antalya and Adana, Le Monde writes.

In turn, the German newspaper Stuttgarter Nachrichten in commenting on the results said that Erdoğan`s AKP, accustomed to electoral victories, had historically been associated with growing public welfare in the country. However, last Sunday, the majority of voters considered the government responsible for economic instability, rising unemployment and the depreciation of the national currency, and chose to stay at home or to vote for opposition parties. If Erdoğan, taking advantage of his influence on the judicial branch of government, tries to contest his opponent’s victory, he will face extremely serious consequences. The Erdoğan government has so far concealed the real scale of the economic crisis. However, if Erdoğan hopes to avoid a final defeat, he will have to act in the light of this reality, the paper concludes.

According to the Turkish wing of German publication DW, voters sent Erdoğan a powerful message. Meanwhile, according to unofficial data, the opposition managed to strengthen their position in areas inhabited by Kurdish populations. For other parties, the kind of results the AKP achieved would be considered a cause for celebration… but the ruling party is doing anything but celebrating, as it is accustomed to unconditional victories, the publication emphasizes.

Journalist, specialist in criminology, recipient of the EU Prize for Journalism and Turkish Journalists’ Association’s press freedom award , and the author of “Journalist-wolf in the stressful triangle – Incident-police proceedings-lawsuit”,  Sedat Simavi Journalism Award – 2007