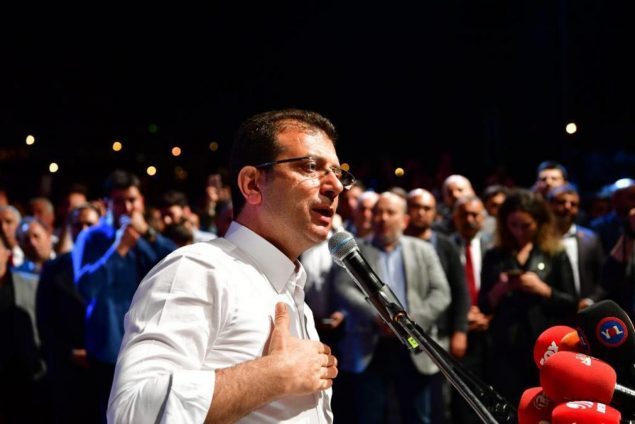 Ekrem Imamoglu of the Republican Peoples’ Party, who was named Istanbul’s new mayor after hotly contested March elections, urged supporters to ‘never give up’ on Monday (Courtesy: CHP)

After nearly three weeks of disputes and recounts, following local elections on March 31, the CHP’s Ekrem Imamoglu was declared Istanbul mayor. But not for long. On Monday 6, the sound of saucepans being hit with wooden spoons echoed through the streets of Istanbul and Imamoglu, vowed to ‘never give up,’ as Turkey’s High Election Board orders a new vote on 23 June. It should not be forgotten that almost a month ago the election in the Yusufeli district of Artvin was annulled upon CHP’s request.

After weeks of complaints and allegations of voter irregularities, Turkey’s election board has cancelled the results of Istanbul’s recent mayoral race, ordering a new vote to be held in the city next month.

In a statement on Monday, the Turkish High Election Board (YSK) said that seven of its 11 members voted to cancel the outcome of the contested March elections in Istanbul.

The main opposition candidate for mayor, Ekrem Imamoglu of the Republican Peoples’ Party (CHP), won by 14,000 votes, though that result was challenged by the ruling Justice and Development Party (AKP).

The board said it based its decision to order a re-run after it assessed claims that members of the boards running several polling stations in Istanbul were not public servants.

Under Turkish law, polling stations must be staffed by public servants whose job is to ensure that the election runs smoothly.

The AKP had previously alleged that several polling station officials were private-sector employees.

In its announcement on Monday, the YSK also ordered a new vote to be held in Istanbul on 23 June.

The same candidates will be on the ballot, including Imamoglu, who urged his supporters to not give up hope.

People in Istanbul’s opposition strongholds went out into the streets after the YSK’s decision was made public, banging pots and pans in protest of the decision.

‘We will never give up. I believe all of Turkey is with us’

Addressing a large crowd of supporters in the city’s Beylikduzu neighbourhood late on Monday, Imamoglu condemned the board for cancelling the poll results.

He also accused the YSK of buckling under government pressure. “The election board says there were irregularities in the polling station boards,” he said.

“The very same boards ran the presidential elections and the parliamentary elections last year. Then those elections’ [results] are shady, too.

“We will never give up. I believe all of Turkey is with us,” he added.

According to AKP representatives on the board, the YSK also cancelled Imamoglu’s mandate as Istanbul mayor.

An interim replacement is expected to be appointed between now and the election re-run on 23 June, they said.

The reaction to the board’s decision was different among AKP officials and supporters on Monday.

The party’s spokesman, Omer Celik, said in a televised statement that the opposition should respect the decision, which he said was part of the electoral process.

“We will respect people’s will in the next election whatever the results might be,” he said.

“With this decision, our demand for re-election has been vindicated,” said Recep Ozel, the party’s representative at the YSK, according to Turkey’s state-run Anadolu news agency.

Ozel also confirmed the board’s decision earlier in the day. “May [God] make it beneficial,” he wrote on Twitter.

After the AKP’s candidate for mayor of Istanbul, Binali Yildirim, lost the vote on 31 March, the party raised several allegations of voter fraud.

AKP representatives filed a series of complaints to the YSK after the results came out, alleging that several people cast ballots in Istanbul despite being ineligible to vote in the city.

The outcome in the mayoral race signalled the first time in 25 years that parties affiliated with Turkish President Recep Tayyip Erdogan lost control of the city.

The AKP’s losses in local elections there and in the capital, Ankara, among other places, represented the biggest electoral blow to the party since it first gained electoral success in 2002.

Beyond its symbolic importance as Turkey’s economic and cultural capital, the Istanbul Metropolitan Municipality (IBB) is also critical due to its vast resources, including a $7.5bn budget and widespread employment opportunities.