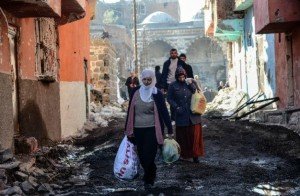 Amid focus from the European Court of Human Rights (ECHR) in ongoing violence in Turkey’s southeast, military operations against the outlawed Kurdistan Workers’ Party (PKK) in densely populated urban zones are coming under increasing scrutiny.

Legal action has been taken against 18 mayors and 48 municipals council members from the Kurdish problem-focused Peoples’ Democratic Party (HDP) as clashes continue, with some MYK members demanding swifter action against HDP municipalities that the government says have been lending logistical support to the PKK. 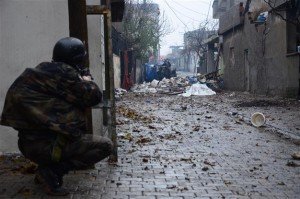 “We are going over the situation carefully in order not to lead to a disadvantaged situation for Turkey if these practices are taken to the Constitutional Court and the ECHR,” Davutoğlu was quoted by sources as saying in the meetings.

AKP executives were also told in the meeting that security operations were planned to be completed by the end of January at latest.

At a late December meeting, AKP executives discussed ongoing curfews in a number of southeastern towns during operations. Although curfews are purportedly designed to avoid harming civilians, officials also said disturbing images of human rights abuses by police during operations should be avoided and the support of locals against the PKK should be put to good use.

Also in late December, the HDP applied to the ECHR after Turkey’s Constitutional Court rejected an appeal by HDP Deputy Co-Chair Meral Danış Beştaş against the ongoing declaration of curfews in the country’s eastern and southeastern regions.

The ECHR subsequently asked Ankara to submit a defense statement over the ongoing curfew in the southeastern city of Cizre by Jan. 8.

Meanwhile, daily Cumhuriyet reported on Jan. 8 that Prime Minister Davutoğlu is “eager to return to resolution table.” A fragile peace process and two-and-a-half-year de facto ceasefire collapsed in the summer of 2015.

The report cited a Jan. 6 meeting between Davutoğlu and “a group of intellectuals calling for peace,” referring to observations of the meeting participants who wished to remain anonymous.

“Both the ruling party and [President Recep Tayyip] Erdoğan are aware that the current situation is not sustainable,” one participant told Cumhuriyet when asked whether a return to the table would be possible.

Erdoğan recently claimed that Turkey “no longer has Kurdish problem, only a terrorism problem.”

When asked who would sit around the prospective table as a counterpart, the same participant responded it would likely be “Kurdish circles who are close to the AKP.”

Davutoğlu is willing to take further steps that involve the HDP, but Erdoğan and certain hardline figures in the government favor the continuation of security-based policies, Cumhuriyet also reported.

Reminded of calls for the parliamentary immunity of the two HDP co-chairs to be lifted, the source suggested that those calls will likely “remain politically delivered remarks.”

“In particular, Deputy Prime Minister Numan Kurtulmuş has frequently underlined their willingness to resolve the matter at parliament and through dialogue,” Cumhuriyet quoted them as saying.

Turkey to defend its record before European Court of Human Rights

Turkey’s government is set to provide a defense at the European Court of Human Right (ECHR) over curfews in Southeast Anatolia, where security forces have been conducting operations against militants.

“The answers to these questions will be given through legal ways. These operations will continue until this region is fully cleared of terrorists. The state has its determination and nobody can question this,” EU Minister Volkan Bozkır said Jan. 8.

Bozkır said the Peoples’ Democratic Party (HDP) had applied to the European court over the declaration of curfews, prompting the Strasbourg-based court to demand Turkey answer questions on how the basic needs of the people are being met.

In recent months, security forces have launched an extensive military operation in districts like Sur, Cizre and Silopi and others to dissemble trenches and roadblocks that they claim have been erected by the outlawed Kurdistan Workers’ Party (PKK).

Curfews have been declared in many areas since early summer, raising concerns about the continuation of normal life and the ability of locals to meet their basic needs. The HDP brought the issue to the attention of the ECHR after its individual application to the Constitutional Court was rejected.

‘EU has nothing to say’

Touching on the EU’s political reaction to the operations, Bozkır said the EU was also engaged in a fight against terrorism in a bid to respond to growing terrorist threats across the continent and, therefore, could not criticize Turkey.

“Like all countries, Turkey has the obligation, responsibility and right to provide security and comfort to its citizens. An important operation is being carried out in Turkey,” Bozkır said, explaining that militants had launched a massive campaign in the aforementioned areas under the guise of democratic autonomy with their own flag and legal system.

“In response, the Turkish state announced that it would not allow this and started to clear these provinces with security forces. We have made important progress. We hope this region will soon be cleared of terrorists and their trenches so that our people can continue to live in peace and our schools can be reopened. In such a situation, the EU has no word to say. And until now, there were no serious criticism … directed at us by the EU,” he said.