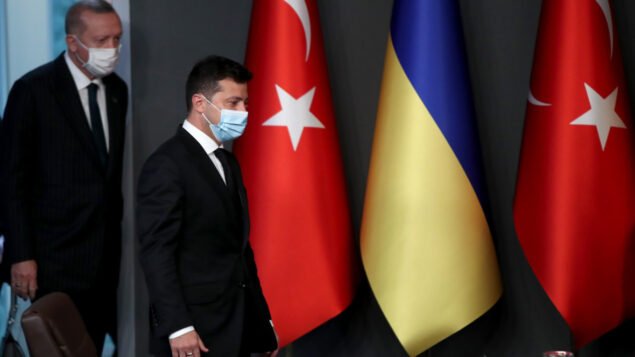 The President of Turkey, Recep Tayyip Erdoğan has been holding meetings with Ukrainian President Volodymyr Zelensky and also Vladimir Putin, but how did their conversations deal with such contentious subjects as Crimea, Donbass and NATO membership for Ukraine?

Two days after donning combat gear while visiting government troops at the Donbass battle line, Ukrainian President Volodymyr Zelensky flew to the Turkish capital of Ankara to join the nation’s president, Recep Tayyip Erdoğan, in a tête-à-tête and a meeting of the Strategic Ukrainian-Turkish Council that produced a twenty-point statement. In that document Turkey fully backs the position of Ukraine and its sponsors in the U.S., NATO and European Union in regard to forcing the Donetsk and Lugansk republics to return to Ukraine, driving Russia out of Crimea and granting NATO membership to Kiev.

The website of the Ukrainian head of state confirms that “all aspects of the strategic partnership between the two countries were considered at today’s [April 10th] meeting.” Zelensky is cited emphasizing commitments to joint work in the energy sphere and in weapons manufacturing. The energy factor involves among other matters the prospect of Ukraine connecting with the 1,100-mile Baku–Tbilisi–Ceyhan oil pipeline and the Baku-Tbilisi-Erzurum gas pipeline running from the Caspian Sea region to Turkey. Routing oil and gas from Turkey to Ukraine and beyond to the rest of Europe would jeopardize Russia’s role as energy provider to EU nations.

In terms of defense industry cooperation, already extensive, the joint production of military aircraft was discussed. Zelensky stated that Turkish-Ukrainian defense cooperation is “the locomotive of the strategic partnership between the two countries.” Turkey of course is a NATO member; in fact is NATO’s second-largest member in terms of both population and the size of its armed forces. The joint statement expresses support for “for the prospect of Ukraine’s NATO membership, in particular its intention to obtain a Membership Action Plan in the near future, and to note the desire to promote interoperability of the Armed Forces of Ukraine with the armed forces of Allies.”

The Zelensky-Erdoğan meeting occurred seventeen days after a meeting of the Quadriga (2 + 2) format, also held in Ankara, wherein one representative each from the two nations’ foreign and defense ministries meet to solidify their strategic military and foreign policy partnership. That meeting also demanded that Donetsk, Lugansk and Crimea be returned to Ukraine, referring to Crimea as “temporarily occupied by the Russian Federation.” It also recommended further cooperation in the defense sector between Russia’s neighbor and the NATO powerhouse.

The earlier meeting also pledged the two states to work together in “resolving conflicts in the regions of the Middle East, North Africa, the Eastern Mediterranean and the Caucasus.” What conceivable role Ukraine would have in those parts of the world is hard to fathom; but Turkey is active in every one of them and in an aggressive military capacity: Syria (and recently Iraq), Libya, vis-à-vis Greece in the Aegean Sea and supporting Azerbaijan in its recent war against Nagorno-Karabakh in the Caucasus. The Quadriga format was created on December 18 of last year.

The declaration issuing from the Erdoğan-Zelensky meeting of April 10 echoed most of the above points, calling for continued deliberations by the Quadriga group, “the de-occupation of the Autonomous Republic of Crimea and the city of Sevastopol, as well as the territories in the Donetsk and Luhansk regions,” and, as was seen above, to hasten Ukraine’s incorporation into NATO.

What is described as the de-occupation of Crimea means taking it from Russia and expelling the Russian Black Sea Fleet. Point 8 of the joint declaration says the following: “To strengthen joint efforts to improve the living conditions of Ukrainian citizens, in particular Crimean Tatars, who have been forced to leave their homeland, Crimea, as a result of the temporary occupation.”

21st century neo-Ottoman sultan he may secretly style himself, Erdoğan has likely never accepted the results of the 1853-1856 Crimean War. By “de-occupying” Crimea – and nothing short of war with Russia could attain that objective – he does not necessarily intend returning it to Ukraine. Or if so not for long. Crimean Tatars are a Turkic people and are being exploited by Turkey in Russia as other Turkic populations have been in Iraq, Syria and the Caucasus to justify military interventions. With Turkey pledging support to Ukraine to “de-occupy” Crimea, one is reminded of the Aesopian fable of the wolf, the sheep and the sheepdog, in which the wolf assures the sheep that he can help “liberate” them from the often officious attentions of the sheepdog.

Also, on April 9 Erdoğan and Vladimir Putin discussed Ukraine. One wonders if they chatted about bringing Russia’s 1,200-mile neighbor into NATO and evicting Russia from Crimea. Likely not.