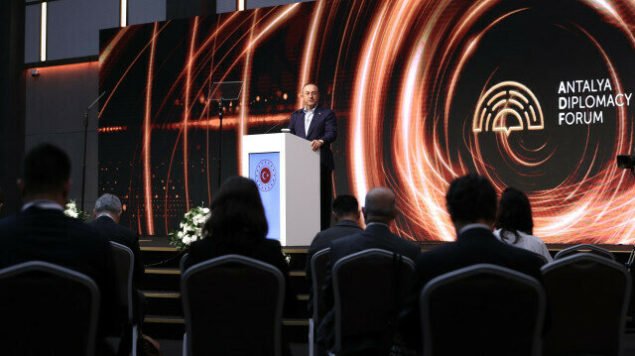 The three-day Antalya Diplomacy Forum started in southern Turkey on June 18. According to the Turkish Foreign Ministry, its participants include ten current and three former heads of state and government (presidents and prime ministers), 42 foreign ministers and over 50 representatives of international organizations.

The three-day Antalya Diplomacy Forum started in southern Turkey on June 18. According to the Turkish Foreign Ministry, its participants include ten current and three former heads of state and government (presidents and prime ministers), 42 foreign ministers and over 50 representatives of international organizations.

Topics of discussion include the Balkans, the future of Europe, trans-Atlantic relations, refugees and migrants and terrorism (which with Turkey is usually a reference to the Kurdish Workers’ Party and affiliates). A session was scheduled on Turkey’s proposal for an Eastern Mediterranean conference as well.

The conference is another reflection of Ankara’s ambition to establish itself not only as a regional but a latent global power. Evidence of that policy has been seen from the military side in places ranging from Libya to the Caucasus and from Iraq and Syria to Afghanistan.

Speaking on the sidelines on the first day of the event, the foreign minister of Pakistan, Shah Mahmood Qureshi, called for joint Pakistani-Turkish cooperation in Afghanistan after all U.S. and other NATO forces (except Turkey’s) are withdrawn. Qureshi was quoted by a reporter from Daily Sabah as stating: “I will be meeting the Turkish foreign minister on June 20 and I have to hear him out about what is their proposal. I do not know the details yet.”

After meeting with the leaders of several other NATO countries at the June 14 NATO summit in Brussels, Turkish President Recep Tayyip Erdoğan said he intended to invite Pakistan and Hungary to join Turkey in playing a security role in Afghanistan after the departure of U.S. and NATO military forces. Pakistan is an obvious choice for him, as the two nations are solidifying cooperation in several spheres, including the military, but Hungary is not so obvious a selection. One possibility is that the nation has hosted the multinational NATO-supported Strategic Airlift Capability since 2008 and would be best qualified to share control of the Hamid Karzai International Airport with NATO ally Turkey.

Erdoğan, with characteristic lack of timidity, said that his nation was the only one that could continue a foreign security function in Afghanistan after the general withdrawal.

On June 17 the Afghan Foreign Ministry said that Cihad Erginay, the Turkish ambassador to Afghanistan, met with Afghan Foreign Minister Mohammad Haneef Atmar. Turkey advocated bringing Pakistan into the reconciliation process – by which it might be understood to mean negotiations between the government of President Ashraf Ghani and the Taliban – and its envoy spoke both of continuing a NATO role in the nation and recruiting “the support of regional countries, especially Pakistan” in Afghanistan.

The population of Afghanistan is over 40% Pashtun and some 12% Turkic (Uzbek and Turkmen). The first gives Pakistan and the second Turkey the influence of ethnic and linguistic affinity. The largely autonomous warlord in the north, ethnic Uzbek Abdul Rashid Dostum, has lived in Turkey and owns property there. He recently threatened Afghan President Ghani with the prospect of a South Turkestan (with Turkish backing) if Kabul doesn’t meet his demands.

In what is a revealing indication of what may lie at the root of a Turkish-Pakistani alliance not only in Afghanistan but also much further afield, at the beginning of the month the speaker of the Turkish parliament, Mustafa Şentop, was in Pakistan where he met with Pakistani President Arif Alvi. The Turkish parliamentarian was quoted by the Daily Sabah as stating Turkey and Pakistan should lead the Islamic world together.

A Turkish-Pakistani axis, replete as it would be with nuclear weapons, would be a force – a military force – to contend with; a combination of NATO’s largest member state outside North America and the most populous of NATO’s forty partners.