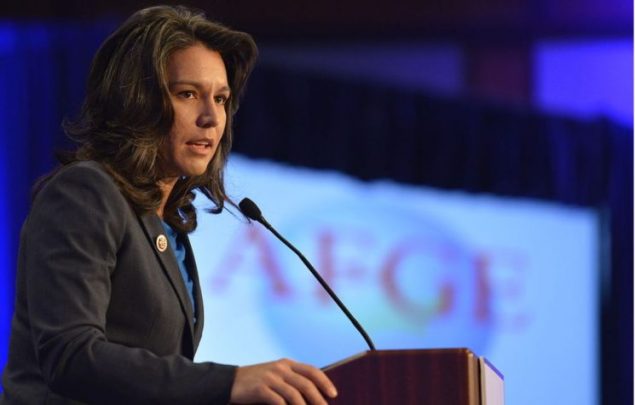 Tulsi Gabbard is under fire for opposing war. Meanwhile, her ‘left’ critics have accused her of ‘not really being antiwar’. Although she is no socialist and has associations with Hindu nationalist Prime Minister Modi, even so she is the only candidate with a hat in the ring who is opposing war and she has plenty of support from regular voters.

Voters looking ahead to 2020 are being bombarded with soundbites from the twenty plus Democratic would-be candidates. That Joe Biden is apparently leading the pack according to opinion polls should come as no surprise as he stands for nothing apart from being the Establishment favorite who will tirelessly work to support the status quo.

The most interesting candidate is undoubtedly Congresswoman Tulsi Gabbard, who is a fourth term Congresswoman from Hawaii, where she was raised (Gabbard was born in American Samoa). She is also the real deal on national security, having been-there and done-it through service as an officer with the Hawaiian National Guard on a combat deployment in Iraq. Though in Congress full time, she still performs her Guard duty.

Tulsi’s own military experience notwithstanding, she gives every indication of being honestly anti-war. In the speech announcing her candidacy she pledged “focus on the issue of war and peace” to “end the regime-change wars that have taken far too many lives and undermined our security by strengthening terrorist groups like Al-Qaeda.” She referred to the danger posed by blundering into a possible nuclear war and indicated her dismay over what appears to be a re-emergence of the Cold War.

In a recent interview with Fox News’s Tucker Carlson, Gabbard doubled down on her anti-war credentials, telling the host that war with Iran would be “devastating,” adding that “I know where this path leads us and I’m concerned because the American people don’t seem to be prepared for how devastating and costly such a war would be… So, what we are facing is, essentially, a war that has no frontlines, total chaos, engulfs the whole region, is not contained within Iran or Iraq but would extend to Syria and Lebanon and Israel across the region, setting us up in a situation where, in Iraq, we lost over 4,000 of my brothers and sisters in uniform. A war with Iran would take far more American lives, it would cost more civilian lives across the region… Not to speak of the fact that this would cost trillions of taxpayer dollars coming out of our pockets to go and pay for this endless war that begs the question as a soldier, what are we fighting for? What does victory look like? What is the mission?”

Gabbard, and also Carlson, did not hesitate to name names among those pushing for war, one of which begins with B-O-L-T-O-N. She then asked “How does a war with Iran serve the best interest of the American people of the United States? And the fact is it does not,” Gabbard said. “It better serves the interest of people like [Israeli Prime Minister Benjamin] Bibi Netanyahu and Saudi Arabia who are trying to push us into this war with Iran.”

Clearly not afraid to challenge the full gamut establishment politics, Tulsi Gabbard had previously called for an end to the “illegal war to overthrow the Syrian government,” also observing that “the war to overthrow Assad is counter-productive because it actually helps ISIS and other Islamic extremists achieve their goal of overthrowing the Syrian government of Assad and taking control of all of Syria – which will simply increase human suffering in the region, exacerbate the refugee crisis, and pose a greater threat to the world.” She then backed up her words with action by secretly arranging for a personal trip to Damascus in 2017 to meet with President Bashar al-Assad, saying it was important to meet adversaries “if you are serious about pursuing peace.” She made her own assessment of the situation in Syria and now favors pulling US troops out of the country as well as ending American interventions for “regime change” in the region.

In 2015, Gabbard supported President Barack Obama’s nuclear agreement with Iran and in 2016 she backed Bernie Sanders’ antiwar candidacy. More recently, she has criticized President Donald Trump’s withdrawal from the Iran nuclear deal. Last May, she criticized Israel for shooting “unarmed protesters” in Gaza, a very bold step indeed given the power of the Israel Lobby.

Tulsi Gabbard could well be the only genuine antiwar candidate that might truly be electable in the past fifty years, and that is why the war party is out to get her. Two weeks ago, the Daily Beast displayed a headline: “Tulsi Gabbard’s Campaign Is Being Boosted by Putin Apologists.” The article also had a sub-headline: “The Hawaii congresswoman is quickly becoming the top candidate for Democrats who think the Russian leader is misunderstood.”

The obvious smear job was picked by ABC’s George Stephanopoulos, television’s best known Hillary Clinton clone, who brought it up in an interview with Gabbard shortly thereafter. He asked whether Gabbard was “softer” on Putin than were some of the other candidates. Gabbard answered: “It’s unfortunate that you’re citing that article, George, because it’s a whole lot of fake news.” Politico the reported the exchange and wrote: “’Fake news’ is a favorite phrase of President Donald Trump…,” putting the ball back in Tulsi’s court rather than criticizing Stephanopoulos’s pointless question. Soon thereafter CNN produced its own version of Tulsi the Russophile, observing that Gabbard was using a Trump expression to “attack the credibility of negative coverage.”

Tulsi responded “Stephanopoulos shamelessly implied that because I oppose going to war with Russia, I’m not a loyal American, but a Putin puppet. It just shows what absurd lengths warmongers in the media will go, to try to destroy the reputation of anyone who dares oppose their warmongering.”

Tulsi Gabbard had attracted other enemies prior to the Stephanopoulos attack. Glenn Greenwald at The Intercept described how NBC news published a widely distributed story on February 1st, claiming that “experts who track websites and social media linked to Russia have seen stirrings of a possible campaign of support for Hawaii Democrat Tulsi Gabbard.”

But the expert cited by NBC turned out to be a firm New Knowledge, which was exposed by no less than The New York Times for falsifying Russian troll accounts for the Democratic Party in the Alabama Senate race to suggest that the Kremlin was interfering in that election. According to Greenwald, the group ultimately behind this attack on Gabbard is The Alliance for Securing Democracy (ASD), which sponsors a tool called Hamilton 68, a news “intelligence net checker” that claims to track Russian efforts to disseminate disinformation. The ASD website advises that “Securing Democracy is a Global Necessity.”

ASD was set up in 2017 by the usual neocon crowd with funding from The Atlanticist and anti-Russian German Marshall Fund. It is loaded with a full complement of Zionists and interventionists/globalists, to include Michael Chertoff, Michael McFaul, Michael Morell, Kori Schake and Bill Kristol. It claims, innocently, to be a bipartisan transatlantic national security advocacy group that seeks to identify and counter efforts by Russia to undermine democracies in the United States and Europe but it is actually itself a major source of disinformation.

No doubt stories headlined “Tulsi Gabbard Communist Stooge” are in the works somewhere in the mainstream media. The Establishment politicians and their media component have difficulty in understanding just how much they are despised for their mendacity and unwillingness to support policies that would truly benefit the American people but they are well able to dominate press coverage. Given the flood of contrived negativity towards her campaign, it is not clear if Tulsi Gabbard will ever be able to get her message across. But, for the moment, she seems to be the “real thing,” a genuine anti-war candidate who is determined to run on that platform. It might just resonate with the majority of Americans who have grown tired of perpetual warfare to “spread democracy” and other related frauds perpetrated by the band of oligarchs and traitors that run the United States.