According to the Washington Post, guests on Donald Trump’s luxurious personal 757 jet—gold-plated seat-belt buckles!—who get peckish and order a burger are served Wendy’s. It would have to be Wendy’s. No other food chain strives so hard to avoid buying tomatoes from Florida, where they are almost guaranteed to have been picked by immigrants, a policy surely appealing to Trump. Admittedly, the tomatoes in question are quite possibly picked by a worker confined in conditions of near slavery, paid minimal amounts and forced to scavenge for food, but at least he or she is not an immigrant working in this country. 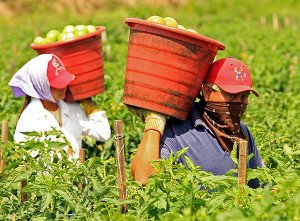 To understand the background to the Wendy’s guarantee, we have to go back to the beginning of the century, when a workers’ rights group in Florida, the Coalition of Immokalee Workers, pioneered an innovative and effective strategy. Agricultural workers are a traditionally exploited group, excluded from the National Labor Relations Act, the New Deal law enshrining basic workers’ rights such as collective bargaining. Conditions have been especially dire for the men and women, almost entirely immigrants from Mexico and Central America, who picked the Florida fruit and vegetable crops. In 2001, tomato pickers were still being paid the forty cents per thirty-two-pound bucket of tomatoes that they were two decades earlier. (Some received nothing at all. When I visited Immokalee in 2001, the C.I.W. had just uncovered a slave camp nestled between a Ramada Inn and a retirement community in the little town of Lake Placid, the fifth such operation busted by the Coalition in the past six years. Inmates who tried to escape risked beatings or worse.)

Naturally, the workers had fought for better conditions using traditional means, but a number of strikes had yielded only defeat. In 2001, however, the C.I.W. conceived and adopted a new strategy, targeting not the agribusinesses that employed and exploited them, but the farmers’ corporate customers, using the leverage of consumers’ social conscience. In the first such campaign, the group fomented a nationwide boycott of Taco Bell. The demand was simple: Commit to paying an extra penny a pound directly to the pickers. This Boycott the Bell movement, augmented with widely publicized hunger strikes by C.I.W. organizers, caught on across the country, especially on college campuses. Eventually Yum! Brands Inc., the parent company of Taco Bell, caved and accepted the terms.

Over successive years other giant enterprises have fallen into line. Burger King, McDonald’s, Chipotle, and Walmart all eventually signed on to the Fair Food Program, a C.I.W. initiative in which participating retailers agree to purchase Florida tomatoes exclusively from suppliers who observe a specified code of conduct that includes zero-tolerance for slavery and sexual violence, as well as the direct penny-a-pound payments.

The program has been a big success. Fourteen major companies, including Walmart and McDonald’s, have now signed on, as have growers responsible for over 90 percent of Florida’s tomato production. Only one major fast-food enterprise has refused to join: Wendy’s.

For a period, the company, which is controlled by hedge-fund billionaire Nelson Peltz’s Trian Partners, adopted the P.R. gambit of telling consumers, via its website, that it didn’t need to join the program because it was already buying from Fair Food Program growers. Left unmentioned was the fact that it was not paying the workers their penny a pound, nor did it agree to buy only from program-affiliated growers. This subterfuge did not last long. In early 2015, the C.I.W. stepped up pressure on the errant firm to mend its ways, fomenting a campaign for consumers to call its headquarters and demand that it sign on to the program. But Wendy’s now had a ready response. Caller after caller was informed that the company’s strictures were beside the point, because the firm was not buying any tomatoes from Florida at all. Again, the devil was in the omissions, because winter tomatoes for the North American market can only from three places: Florida, Canada, and Mexico.

So which alternate supplier would a corporation too mean to shell out an extra penny a pound in Florida choose as substitute—Canada or Mexico? Clue: Canadian tomatoes are three times as expensive at retail as Mexican tomatoes.

The Kaliroy Corporation, headquartered in Nogales, Arizona, with offices in McAllen, Texas, and Los Angeles, is the U.S. distribution arm of the major Mexican tomato grower, Bioparques de Occidente, which, according to the Los Angeles Times, produces up to 6 million boxes of the red fruit each year for the U.S. market—an enormous operation whose expansion has been fueled in part by a $17 million loan from the World Bank. As Kaliroy confirmed when I called, they are one of the suppliers to Wendy’s.

Bioparques workers who spoke to Times reporter Richard Marosi for an investigation published December 10, 2014, described subhuman conditions, with workers forced to work without pay, trapped for months at a time in scorpion-infested camps, often without beds, fed on scraps, and beaten when they tried to quit.

Although such reports raised eyebrows among some of the firm’s American customers, Wendy’s continues to buy some of its tomatoes from Mexican suppliers. “Walking away from the most effective human-rights program in the food industry into an industry where human-rights violations are endemic and unchecked,” C.I.W. co-founder Greg Asbed told me, “is not only indefensible but immoral.”

In consequence, the Immokalee coalition has dusted off the nuclear weapon last deployed against Taco Bell all those years ago: a nationwide boycott, launched with a march last week that ended at Peltz’s offices in Manhattan.

“We’re going to keep this up until they join the Fair Food Program,” Asbed tells me, “and if history is any guide, they will.”

But where will The Donald get his tomatoes then?

Andrew Cockburn is the Washington Editor of Harper’s Magazine. Follow him at @andrewmcockburn.

For most of Immokalee’s field hands, blatant wage abuses and physical cruelty have largely vanished from the tomato rows. Workers hope to use ‘fair food’ labels to spread those reforms to rest of America’s farmland. Part 4 of a series on human trafficking. 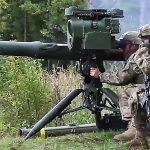 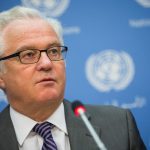