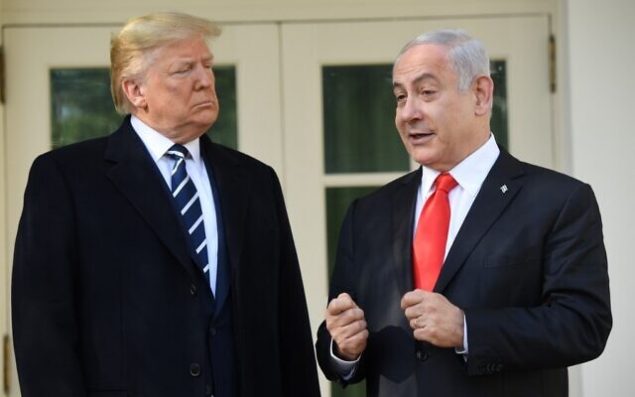 US President Donald Trump greets Israeli Prime Minister Benjamin Netanyahu as he arrives for meeting on the South Lawn of the White House in Washington, DC, January 27, 2020. (Photo by SAUL LOEB / AFP)

Trump and Netanyahu will be remembered as the two leaders who betrayed Israel and subjected its citizens to live and die by the gun.

Since the Second Intifada in 2000, the Israelis have been steadily moving to the right-of-center. Successive Israeli governments have made national security central to Israel’s very survival, and linking it to the presumed existential threat posed by the Palestinians has become the national mantra. Thus, controlling the Palestinians’ lives and their territory became synonymous with Israel’s national security. Israel has, for all intents and purposes, given itself the license to do whatever it pleases in the Palestinian territories, including building settlements, erecting barriers and fences, demolishing Palestinian homes, and restricting their movement, and was poised to annex the Jordan Valley, all in the name of national security.

The unveiling of Trump’s “deal of the century” (Deal) was framed to fully support the Israeli scheme, yet it tragically condemned the next generation of Israelis and Palestinians to years, if not decades, of violence and wars while dangerously destabilizing the region, which is already plagued with widespread turmoil.

Do Trump and Netanyahu understand the implications of what they have done? Here we have an impeached president and a prime minister who is indicted and facing trial—two crooks facing new elections. Trump will drag himself through any gutter to be reelected, and pleasing his evangelical constituency is vital to that goal. Thus, releasing his decisively pro-Israel Deal at this particular juncture was meant to serve his immediate goal and that of Netanyahu, who is also seen as the conduit for the messianic mission of the evangelicals.

Netanyahu, whose zealotry and obscene lust for power matches only that of Trump, gladly embraced the Deal because it boosts his reelection prospects, realizes his life-long aspiration for a Greater Israel, and allows him to emerge as Israel’s savior who restored much of the Jews’ biblical “land of Israel” to its rightful owners.

To understand why the Deal puts Israel’s future at risk, one need not go too far to find the answer. Even before the Deal was disclosed, the Palestinian Authority rejected it on the grounds that it denies the Palestinian right to statehood, legitimizes the settlements, allows for the annexation of nearly 30 percent of Palestinian land, and permits Israel to annex the Jordan Valley. This shatters any prospect of establishing a viable Palestinian state, regardless of what the deal stipulates.

By what logic then will the Palestinians accept such a deal that robs them of a more than 70-year-old dream to establish an independent state? Whether or not they missed several opportunities in the past to realize their dream, their initial rejection of Israel’s right to exist does not nullify their right to a state of their own that lives in peace with Israel.

The Deal has only justified the claim of extremist Palestinian groups, including Hamas and Islamic Jihad, and countries like Iran and others, that Israel has had all along no intention of allowing the Palestinians to have an independent state, and that only continued violent resistance will force Israel’s hands.

This will be the net outcome of the Deal. As the Palestinians lose hope and have little left to lose, violence and more violence will be the order of the day, which is precisely what Israel wants to avoid and the Deal was presumably supposed to prevent.

This also begs the question as to who, in fact, can pose an existential threat to Israel. Certainly not the Palestinians, who know only too well that Israel is a formidable military power that can at will take any security measure deemed necessary to protect itself. Moreover, there is not a single country in the Middle East, including Iran, that can challenge Israel militarily without sustaining horrifyingly unacceptable damage. Tehran especially knows that well.

What Trump and Netanyahu have cooked up is a recipe for perpetual violent conflict, and while Israel will always have the upper hand, it will not enjoy a day of rest. Israel will have to station thousands of additional troops and spend hundreds of millions of dollars more annually on security to protect the jigsaw puzzle of settlements scattered throughout the West Bank. The resentment and resistance of the Palestinians will only worsen, and any incident can trigger deadly violence.

Preventing the establishment of a Palestinian state and enshrining the dream of Greater Israel that Netanyahu championed will be the nightmare of the right-wing Israelis, as the “deal of the century” will blow up in their faces. Trump and Netanyahu will be remembered as the two leaders who betrayed Israel and subjected its citizens to live and die by the gun.