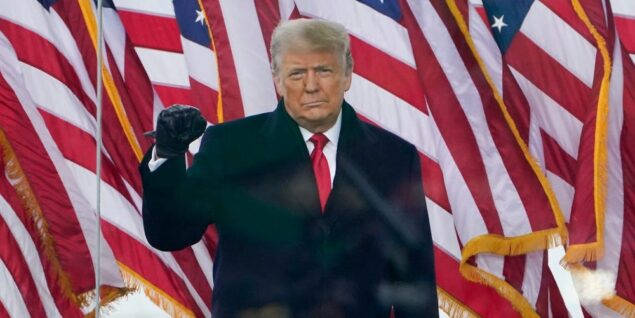 Fiona Hill, who was a national-security official under President Donald Trump, said after a mob of his supporters stormed the Capitol on Wednesday that he “was trying to stage a coup.”

President Donald Trump “was trying to stage a coup” by inciting his supporters to storm the Capitol, but it failed because the military did not join in, Fiona Hill, who was a national-security official under Trump, told The Daily Beast.

A mob of Trump’s supporters violently stormed the Capitol building on Wednesday, hours after the president urged them to “fight much harder” to overturn the election result.

They broke police lines and entered the building through broken doors and windows before ransacking lawmakers’ offices and entering the House and Senate chambers.

Hill, who was an advisor on Russia from 2017 to 2019, suggested that an intervention from all 10 living former defense secretaries this week had prevented armed forces from becoming involved in a coup attempt.

“The president was trying to stage a coup,” she told The Daily Beast. “There was little chance of it happening, but there was enough chance that the former defense secretaries had to put out that letter, which was the final nail through that effort.

“They prevented the military from being involved in any coup attempt. But instead, Trump tried to incite it himself.

“This could have turned into a full-blown coup had he had any of those key institutions following him,” Hill said.

She added that “just because it failed or didn’t succeed doesn’t mean it wasn’t real.”

There had been growing concern in defense circles that the president, as he continued to baselessly insist he won the election, would attempt to involve the military after his former national security advisor Michael Flynn floated the idea of bringing in troops to “rerun” the election.

“There is no mistaking the impact your rhetoric had on the situation, and it is the inflection point for me,” DeVos told the president in a resignation letter.

Michael Sherwin, the acting US attorney in Washington, DC, indicated on Thursday that prosecutors were looking into Trump’s role in the siege at the Capitol and would examine his statements at the rally.

“Yes, we are looking at all actors here, not only the people that went into the building, but … were there others that maybe assisted or facilitated or played some ancillary role in this,” Sherwin said.