[The following commentary is published for the information of New Cold War.org readers. The commentary is a rare departure for a Canadian writer from the anti-Russia prejudice across the political spectrum in Canada, including amongst all the parties in the federal Parliament. New Cold War.org does not share the view of the writer that Russian President Vladimir Putin suffers from “paranoia that the West is out to get him”. That statement by the writer illustrates the very reach of anti-Russia propaganda.] 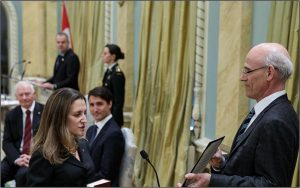 The irrational has begun to dominate our politics as if the American virus has stealthily moved north to infect our national narratives. It reflects itself in various ways but it seems that wars — old wars, current wars and future wars — have gripped the minds of our political elite and their courtiers in the media. Most problematic is Chrystia Freeland whose well-documented hostility towards Russia raises questions about her suitability for the foreign affairs post. She got off almost scot-free for blatantly lying about her Nazi grandfather. Justin Trudeau lost his reason regarding the U.S. missile attack on Syria and we were subjected to an extra-heavy dose of non-sense about Vimy Ridge with Trudeau opining that “this was Canada at its best.”

Really? That was our best? This grotesque war that sent millions of innocent young men — from all combatant countries — to their meaningless deaths is what defined us as a nation? We should obviously mourn the deaths of all those young people forced to sacrifice their lives for nothing.

But Canada at its best? How about when we finally gave women the vote? Or when we established universal medicare? When we decriminalized abortion? Ended the death penalty? When we refused to get sucked into the Iraq war? When Canada invented UN peacekeeping? Or when we took in Syrian refugees?

As for the mendacious Ms. Freeland, why on earth is she still in one of the most important cabinet posts in the Trudeau government? She got a pass on her grandfather’s record with the help of media groupthink along the lines of “we can’t blame her for her Nazi grandfather.” But no one ever did. Critics blamed her for knowing her grandfather was a Nazi collaborator for two decades and saying nothing, and for never denouncing him (she still hasn’t). Critics also blamed her for lying about him — actually portraying him in her autobiography as almost a freedom fighter: “My maternal grandparents fled western Ukraine after Hitler and Stalin signed their non-aggression pact in 1939. They never dared to go back…”

Well, yes, he did leave Ukraine. Freeland’s grandfather Mykhailo Chomiak spent the entire war in Poland editing the Nazi-run newspaper Krakivski Visti (News of Krakow) under the orders of the Nazis’ Polish Governor-General Hans Frank, the man who organized the Holocaust in Poland. Chomiak and his family moved into an apartment seized from a Jewish family and ran the newspaper from editorial offices of a former Polish-language Jewish newspaper, Nowy Dziennik, whose editor ended up being murdered at the Belzec concentration camp along with 600,000 other Jews.

Critics also blame Freeland for repeatedly refusing to answer direct questions about her grandfather. Her office gave the Hillary Clinton defence: “People should be questioning where this information comes from, and the motivations behind it.” Freeland herself tried to deflect them with references to Russian disinformation: “American officials have publicly said … there were efforts on the Russian side to destabilize Western democracies, and I think it shouldn’t come as a surprise if these same efforts were used against Canada.” What disinformation would that be? Not, apparently, the crude attempts at whitewashing her grandfather’s role in Poland.

That whitewashing includes efforts to downplay just how pro-Nazi the newspaper was. Yet Krakivski Visti was a vicious propaganda tool fomenting as much hatred of Jews as it could. The writer Juilan Tarnovych wrote a series, “Out of Satan’s Claws,” in which he referred to Jews as “Yid mobs,” “bastards,” “rotten scum,” “bacillus,” “that riffraff — that nest of crawling kikes,” and “a pile of crawling worms.” Chomiak himself wrote editorials claiming Poland was “infected by the Jews.”

Articles from Chomiak’s newspaper can be found in Holocaust museums around the world, such as the one in Los Angeles, California.

Instead of saying (last year), “I am proud to honour [his] memory today,” how difficult would it be to distance herself from her grandfather’s role?

Perhaps the explanation lies in the fact that Freeland is, like her father and grandfather, a devoted Ukrainian nationalist with a deep-seated hostility towards Russia. Even when she was a journalist with the Financial Times she did not hide her fierce Ukrainian nationalism — encouraging the Euromaidan rebellion that became a violent coup against Russian-friendly Viktor Yanukovich. Freeland’s take? “Their victory will be a victory for us all; their defeat will weaken democracy far from the Euromaidan. We are all Ukrainians now. Let’s do what we can … to support them.”

The democracy that resulted from the coup was not quite as advertised. Freeland’s Nazi ghosts came to life in the new government which was chock-a-block with outright Nazis. The new government had five cabinet members from the Svoboda Party — proud descendants of the Organization of Ukrainian Nationalists (OUN) who fought against the Red Army alongside the Nazis. In 1941 the OUN sent a message to Lvov’s Jews in the form of a pamphlet which said: “We will lay your heads at Hitler’s feet.” The OUN and the SS arrested and executed 4,000 of the city’s Jews.

It is rare to see a modern politician so blinded by personal hostility. To place Chrystia Freeland in the position of foreign minister is nothing short of reckless. If her bias was against Luxembourg it would hardly matter. But the world is now closer to a nuclear holocaust than at any time since the Reagan administration. The relationship between the West and Russia is now the most important geopolitical issue on the planet.

How can we trust someone who has shown hostility towards Russia to the extent that Freeland has to lead Canada in navigating these treacherous foreign policy waters? Does her blindness prevent her from imagining the potential for nuclear war? Is she capable of accepting that Russia has legitimate interests? Are we risking a Freeland blunder in a situation that requires nuance?

Regarding Russia the question arises of whether or not the tail is wagging the dog in the Trudeau government. Trudeau pledged in the last election to rebuild relations with Russia. Now Canada is demanding that “Assad must go” (via Freeland) — pure posturing especially given there is no evidence yet of who used gas against Syrian civilians. Then Trudeau added to the embarrassment by demanding Russia abandon Assad, something everyone knows is not going to happen. But it will add to Putin’s paranoia that the West is out to get him.

Someone should ask Trudeau just who he is trying to please by keeping this flawed politician in such a powerful post.

Murray Dobbin has been a journalist, broadcaster, author and social activist for 40 years. He writes rabble’s State of the Nation column.