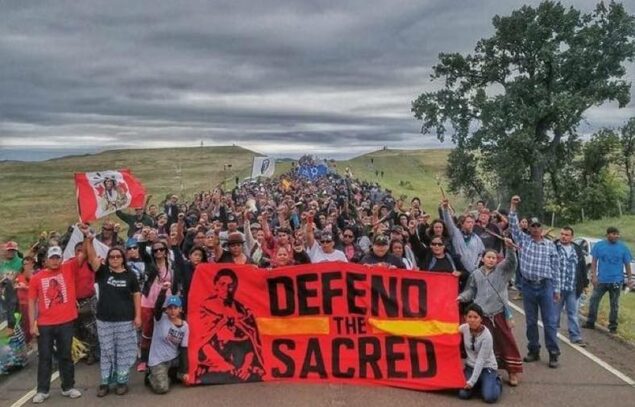 Leaders of the Yankton Sioux Tribe, Cheyenne River Sioux Tribe, Oglala Sioux Tribe and the Standing Rock Tribe sent a letter to Biden on Tuesday requesting he take quick and decisive action on the Dakota Access Pipeline within the first 10 days of his administration.

A copy of the four-page letter is posted on the Standing Rock Sioux Tribe’s Facebook page.

The leaders want Biden to instruct the Army Corps of Engineers to stop the flow of oil through the pipeline.

In the letter, leaders write that in 2016, under the Obama administration, the Assistant Secretary of the Army for Civil Works halted the process for issuing an easement to the Dakota Access Pipeline to cross Lake Oahe until the Army Corps of Engineers prepared an environment review.

In January 2017, Trump reversed the decision and rushed through an easement for the pipeline.

In 2020, however, the tribes prevailed and a federal court ruled that the Army Corps of Engineers violated the National Environmental Protection Act by failing to conduct the environmental study before granting an easement.

Although the court ordered the company to cease operations until the corps completed its review, the Trump administration obtained a temporary stay of the court’s shutdown order.

In their, the four tribal leaders ask Biden to:

1. Instruct the corps to stop continued operation of the pipeline since it currently has no easement.

2. Instruct the Justice Department to withdraw the appeal of the federal court decision to shut down the pipeline during the determining process)

4. Instruct the Army Corps of Engineers to robustly follow the National Environmental Protection Act process with meaningful nation-to-nation consultation with tribes and scrutiny of alternatives including no more pipeline

5. Instruct the Interior Department to reinstate the 2016 Solicitor of the Interior opinion “Tribal treaty and environmental statutory implications of the Dakota Access Pipeline.” The opinion was withdrawn during the Trump administration.

According to the letter, tribal leaders realize that the Army Corps may still grant the easement to the pipeline company. However, they state they all strongly oppose granting the easement on the grounds that the pipeline poses a threat to drinking water, hunting and fishing and ceremonies.

The leaders further explain how the Fort Laramie Treaty of 1868 permanently guarantees a substantial portion of the Great Plains for the absolute and undisturbed use and occupation of the Sioux. They also note that the tribes hold senior water rights in the Missouri River guaranteed by court decisions in 1908, 1996 and 1997.

The leaders promise to contact Biden in the near future to provide more details for denial of the easement but for now request that the five named actions be undertaken immediately.

“It is beyond time for the United States to fulfill the promise that it made in the Treaties and stop the illegal trespass of our lands and waters.”

Mary Annette Pember, a citizen of the Red Cliff Ojibwe tribe, is a national correspondent for Indian Country Today.