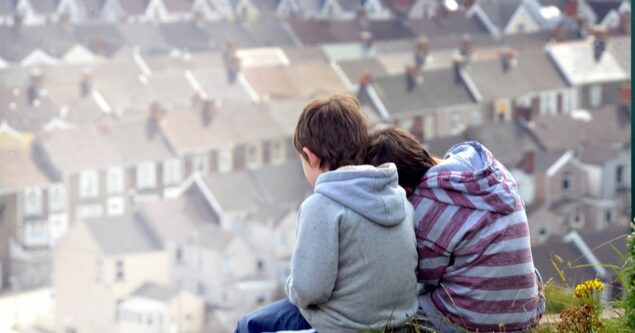 “I think in a society that believes in compassion and justice, I feel deeply ashamed that we have allowed ourselves to get to a situation where millions are trapped in this degrading situation.”

Almost two million children in the UK went short of food this year, according to a new report.

The findings suggest child poverty and hunger are deeper and broader issues than previously thought and have become an “urgent national challenge”, according to the Social Market Foundation (SMF) think tank.

Some 16% of surveyed parents said their children had to make do with smaller portions, had to skip meals or go a day without eating between March and September, it added.

This worrying figure comes as destitution levels in Great Britain are expected to double in the wake of the pandemic with an estimated 2 million families, including a million children, likely to struggle to afford to feed themselves, stay warm, or keep clean as the recession deepens, according to a Joseph Rowntree Foundation study.

Destitution was most salient in areas of the north-east and north-west of England, and parts of inner London.

Helen Barnard, Director Joseph Rowntree Foundation Tweeted: “I think in a society that believes in compassion and justice, I feel deeply ashamed that we have allowed ourselves to get to a situation where millions are trapped in this degrading situation.”

"I think in a society that believes in compassion and justice, I feel deeply ashamed that we have allowed ourselves to get to a situation where millions are trapped in this degrading situation." @Helen_Barnard on our latest research on destitution, out today. https://t.co/Ov8T0cGMCl

She also filmed a video discussing the figures.

New vlog👇I’m appalled, ashamed & angry. Destitution in the UK shot up between 2017 & 2019, affecting 2.5 million people (incl 1/2 million children). It’s not right. It doesn’t have to be this way. Find out more ⁦@jrf_uk⁩ https://t.co/Z6qj9rAOGq pic.twitter.com/BxL3dDTI0W

Children’s Commissioner for England: “Two reports published today by @jrf_uk and @SMFthinktank are a stark reminder of covid’s impact on the lowest income families and how poverty and hunger can blight children’s lives. @annelongfield gives evidence to the DWP select committee on Covid’s impact today.”

Two reports published today by @jrf_uk and @SMFthinktank are a stark reminder of covid’s impact on the lowest income families and how poverty and hunger can blight children’s lives. @annelongfield gives evidence to the DWP select committee on Covid’s impact today.

SMF chief economist Aveek Bhattacharya said: “The stark evidence in this report shows that the challenge of food insecurity and child hunger is even greater and more urgent than many observers had thought and feared.

“The idea of a single child going short of food is heartbreaking, but our evidence shows that almost two million children have been in that awful situation this year.”

Five of the 10 authorities with the highest share of children at risk of hunger are in London, with the others in Devon and Lancashire, according to the report.

It also recommended that policymakers should redistribute food nationally, finding sources of waste in the food chain and directing surpluses to the neediest areas, as well as devolving responsibility and funding for food distribution to local authorities.

🗣 Calling all Local Authorities https://t.co/pwJ41p8MUG
Following conf of £170M Gov investment I want to help to communicate on your hunger-related schemes this winter. Families need assurances. Tag me so I can repost and please fill out the form so we can map out help avail.

A Local Government Association spokesman said: “Councils will be using the Government’s £170 million winter funding package to help provide and oversee support to ensure children do not go hungry in the Christmas holidays and February half-term.

“As many households are likely to be economically vulnerable for some time to come, it is also vital that the Government restores local welfare funding so councils can provide preventative support to families who need it.”

Currently, there are no official statistics on the numbers of children suffering food deprivation, the SMF said.

But there has been national debate over child hunger recently, notably highlighted by Manchester United footballer Marcus Rashford’s campaign which led the Government to backtrack and provide free meals to disadvantaged children over the Christmas holidays.

The SMF report, Measuring and Mitigating Child Hunger in the UK, was sponsored by food delivery firm Deliveroo, which is part of Rashford’s child food poverty taskforce.

The SMF/Opinium survey was carried out between October 3 and October 20.

“A nationally representative sample of 3,000 adults was used, from which a sample of 1,000 parents of children aged under 18 was identified”, the SMF said.

The SMF report added: “The Government last year made changes to the Family Resources Survey, an official measure of household living standards, to cover food insecurity, but data covering the period of the pandemic will not be published until 2022.”