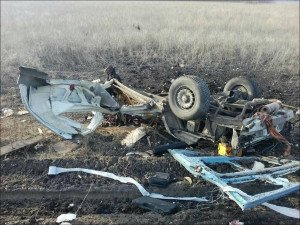 At least four people were killed when a minibus tried to skip a line of vehicles at a checkpoint in eastern Ukraine and hit a landmine, local authorities reported.

The four people were killed and several others injured not far from the village of Maryinka in the Donetsk region in the early hours of February 10, according to Donetsk police. The vehicle was apparently trying to skip a line to the checkpoint and was on the roadside when it ran into the mine.

“There are lots of anti-tank mines in this field and it seems that it hit one of them,” an eyewitness said to AFP, adding that it was a huge blast. The driver and two passengers died on the spot, according to RBC Ukraine. Another man with serious wounds was taken to hospital where he succumbed to his injuries.

A family car with three people inside was also damaged by the blast, with family members suffering wounds of varying severity, a source from DPR law enforcement told TASS. 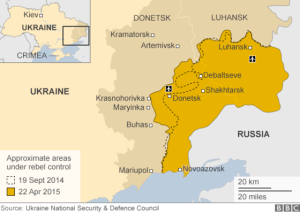 The incident took place at the dividing line between Kiev and rebel troops, on the Donetsk side, Vyacheslav Abroskin, head of Donetsk Regional Police, said in a post on Facebook. Ukraine’s police opened an investigation into the incident for the premeditated murder of two or more people, a police spokesperson in the Donetsk Region reported. Here is his Facebook message on February 10:

Today, about 8 am, on the demarcation line near Mar’inki, a minivan struck a land mine a minivan. The van tried to drive through an adjoining field on a dirt road while on a return trip from  Donetsk. The driver was one of those who died, born in 1971, a resident of Lugansk.

A number of people were were awaiting transportation on the side of the road. One of them, a man, suffered fatal injuries. He died in hospital. A woman was heavily injured.
The accident happened at the control of the territory of Ukraine.

Over 8,000 people have died in the course of the deadly military conflict in Ukraine, which started in April 2014 when the central Kiev government deployed troops to the southeastern Donetsk and Lugansk regions. Civilians were killed during daily shell attacks on residential buildings, schools, hospitals and public transport. 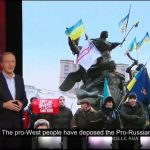 Paul Moreira’s ‘Ukraine: The Masks of the Revolution’ subtitled in EnglishFilms including documentaries, Ukraine
No Ukraine ceasefire in evidence in daily OSCE inspectors’ reportUkraine