A group of 15 Finnish tourists has made a successful visit to the Donetsk and Lugansk people’s republics. It was a rare opportunity for a group of foreigners to witness the truth about the situation in Donbass, including in the war zone there. 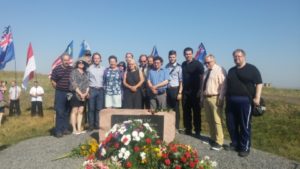 A program for the group was coordinated with state officials and officially supported. Members of the tour group didn’t know each other prior to the visit, but through their common experience in Donbass they made new and strong friendships. This has created the basis for a new Novorossia-Finland friendship community to be created in Finland.

The tour group spent six days in Donbass, travelling from Finland via Russia on public transport to the Donetsk People’s Republic. All members of the group paid the costs of the trip themselves. The group did not have any formal sponsors.

In Donbass, the group travelled by private minibus. Because of the stable and safe situation inside the Donetsk and Lugansk people’s republics, they didn’t need security guards to protect them behind the frontline. The program itinerary was suggested to participants and was voluntary in nature. The group had many opportunities to witness the local situation and meet the locals.

The group visited many known locations, like Saur Mogila, Sergei Prokofiev International Airport (in Donetsk city, destroyed by the Ukrainian military in 2014), the front-line ‘October’ district in Donetsk city, and the war museum. A highlight was attending a memorial event in Grabovo for victims of the Malaysian Airlines crash in July 2014, also attended by the head of Donetsk People’s Republic, Alexander Zakharchenko, and the speaker of DPR parliament, Dennis Pushilin.

The Finnish tour group also attended the Young Republic movement summer camp by the sea in Sedovo and a memorial event for victims of Ukrainian aerial bombings in Snizhne, Lugansk  in 2014.

A special program for the group was a visit to the Prizrak Brigade in the Lugansk People’s Republic, where the group met Finnish volunteer Petri Viljakainen, who serves in the LPR army. A short visit to the frontline positions was arranged for part of the group under the personal guidance of unit Commander Alexei Markov.

After busy days witnessing the situation in Donbass, members of the group discussed their experience with the main organizer of the trip, Janus Putkonen, who is the director of DONi . Opinions were shared about the distorted picture in Finnish mainstream media about the realities in the people’s republics. False stories about armed criminals, security threats and the unstable conditions in the republics were totally debunked. Members of the group shared lots of views and photos of their travel in social media, gathering lots of attention for Donbass.

For Finnish media, the visit of the group was highly uncomfortable. Though some participants offered interviews about their first-hand experiences from Donbass, Finnish media was not interested in publishing articles. But the tour group’s visit was well reported by Russian and local media.

Many members of the group feel a strong responsibility to share their experiences with their friends and public audiences. The group is planning a public event in Finland to share their thoughts and materials with others.

A war-tour program to Donbass has thus officially begun and following the success of the first group, DONi says it will be organizing more small groups from different countries to visit the Donetsk and Lugansk people’s republics. It has agreed with the DPR administration on a framework and goals for future tour activities, opening the republics for friends of Donbass to visit. Plans are underway to organize groups from Italy, Germany, Spain, France and Finland. The next planned visits are scheduled to visit free Donbass in autumn 2016.

If you are interested in joining or receiving information about DONi’s forthcoming ‘SaveDonbassPeopl’e tour groups to the DPR/LPR, send an email, including name, age, profession, country and link to your Facebook/VK pages, to: [email protected].