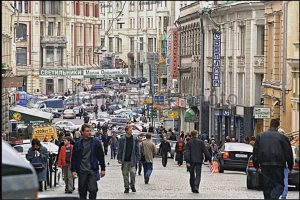 Mallick began her column with a chilling flourish that could be read as a call to violence against people of Russian descent. She writes, “Who is Homo Sovieticus? What is to be done with this sad beaten creature? Did a century of communism — with an interlude of perestroika — and the slipping of Vladimir Putin into the Russian bloodstream make the species unkillable?”

She continues, “With the expiry of the Soviet Union in 1991, the type should have vanished. But so should have Nazis after Germany’s defeat in 1945. Look who’s back.”

The column is dedicated to praising an anti-Putin (and arguably anti-Russia) writer and author of Russian descent who lives in New York, Masha Gessen. Alluding to one of the many, entirely unproven and unwarranted accusations made against Vladimir Putin—that he orders the killings of political opponents–Mallick writes, “Will Putin let her [Masha Gessen] live? Those who cross him reach their expiry date early, some by gunshot, some by poisoning. Putin is a madcap executioner…”

Mallick throws in the by-now tired refrain by Russia truthers run amok in Western media that the Russian government or its security agencies interfered in the 2016 U.S. presidential elections. (For the latest on that worn refrain, see Robert Parry’s latest article: Blaming Russia for the Internet ‘sewer’, in Consortium News, Oct 18, 2017.)

Then we come to perhaps the most outlandish claim of all: “Fast-forward to 2017 when Putin is trying to rebuild the cult of Stalin.”

Coincidentally, Forbes Magazine writer Kenneth Rapoza touched on the ‘Putin admires Stalin’ accusation in a June 16, 2017 Forbes article summarizing material in The Putin Interviews, director Oliver Stone’s four-hour interview with Vladimir Putin that was broadcast on Showtime in June 2017. The film’s transcript is also published as a book under the same title. Rapoza writes:

Does Russia want to return to the days of the monarchy? No, Putin says.

To Stalin’s era? No, he responds, telling Stone that his parents, who died in 1998 and 1999, were Stalin supporters. Stalin support is particularly strong in what Putin calls ‘the hinterlands’, or better yet, Russia’s ‘mid west’ states. Their lives were turned upside [during the 1990s] when state control was taken away. The upheaval was like the Great Depression, only besides the economic malaise, the entire political and financial model is gone too.

Putin says Russia is not going back to the USSR and said he believes the West uses Stalin’s Siberian gulags as a means to discredit Russia, as if Stalin’s brutality is simply in Russia’s DNA.

This is where Putin comes across as a lay historian of world politics. He mentions Oliver Cromwell, a British soldier and notorious religious fighter. Churchill called him a dictator. Yet, this dictator’s statue stands outside the House of Commons in Westminster.

Then there is Napoleon Bonaparte, a marauding imperialist who captured most of Europe in the 18th century after seizing power in a coup in 1799. He is paid homage in statues and monuments throughout Paris. Napoleon today would be the opposite of all that is decent in liberal Paris life. He was known for ordering violent smack-downs of slave rebellions in France’s Caribbean colonies, like Haiti. Today, Paris is an open borders town for north African and Syrian migrants.

Turning to Putin’s own words in The Putin Interviews, we read the following (page 25 and 26 of the paperback edition):

… Stalin is a product of his era. You can try to demonize him however much you like. We try to talk about his merits in achieving victory over fascism. As to his demonization, there was a person in history as Oliver Cromwell. He was a bloodthirsty man who arrived in power on the wave of a revolution and he turned into a dictator and tyrant. Monuments to him are still scattered all across Great Britain. Napoleon is deified. What did he do? He used the surge of revolutionary zeal and arrived in power. He not only restored the monarchy, he pronounced himself Emperor… There are many situations, many people like that—more than enough in world history. I think that excessive demonization of Stalin is one of the ways to attack the Soviet Union and Russia, to show that the Russia of today has something originating from Stalinism…

This doesn’t mean, however, that we have to forget all the atrocities Stalin committed—the destruction of millions of our compatriots, the extermination camps. These things are not to be forgotten… 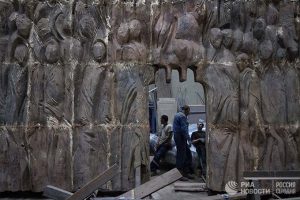 ‘The Wall of Sorrow’ monument to victims of repression in the Soviet Union, by sculptor Georgy Frangulyan, to be opened in Moscow on Oct 30, 2017

Many such examples can be provided of Vladimir Putin’s repudiation of the record of political repression by Stalin. Once upon a time, mainstream journalism employed something called ‘fact checking’ in order to verify the truth or not of statements and accusations. This was employed not only by writers but also by editors as an additional check. But in the present climate of Russia-bashing and Russia-truthing (promotion of false and unproven accusations), all that gets thrown out. It’s a free-for-all.

The Star columnist concludes her column with pure, anti-Russia venom that only confirms the words of caution in Rapoza’s Forbes article. Mallick writes, “Russians long to be told what to do, and they have just the man to do that.”

If such words were written in Canada about Jews, Ukrainians, Japanese or any other national minority, there would be howls of outrage. Heads would roll in the editorial offices of the Toronto Star. But such is the sad state of anti-Russia prejudice in Canada that not a peep of protest is seen or heard–not in mainstream or alternative media, and not from elected politicians or their parties. The Star ceased publishing reader comments some time ago, so that opinion outlet is closed off, while Canada’s mainstream media in general is firmly walled off to published  viewpoints which challenge the prevailing, anti-Russia narrative. That includes the state-run ‘public broadcaster’ the CBC.

Mallick not only writes false allegations against Russia, she is a hypocrite. Along with the rest of mainstream media in Canada, she condemned the violence of the extreme-right in the United States at the time of the right-wing riot in Charlottesville, Virginia on August 11 and 12, 2017. But when it comes to the prominent role of the extreme right in Ukraine, she and the rest of Canada’s mainstream media, along with the political parties in Ottawa, are silent.

Extreme-right politicians hold high offices in Ukraine’s Parliament, police agencies and armed forces. For the past three and a half years, they have waged a brutal war against the people of eastern Ukraine (Donbass) who have dared to oppose the violent overthrow of Ukraine’s elected president in February 2014. But so what? There is a much higher issue involved, according to Canada’s political and media elite, which is to join with the Trump-led U.S., with Great Britain and with the rest of the NATO military alliance to weaken and humble the Russian Federation and any other country that allies with it.

The anti-Russia policy by Ottawa is reckless and dangerous on so many levels. No doubt, many  readers of Heather Mallick’s column were shocked to see where all that can lead. They need to make their voices known and heard.

OTTAWA — The public safety minister says in no uncertain terms Canada will ignore Russia’s global arrest warrant [sic] if the advocate behind recent Magnitsky legislation [UK citizen and financier Bill Browder] shows up at the border. “Canada will decide admissibility to Canada, not the Kremlin,” Goodale said Tuesday… 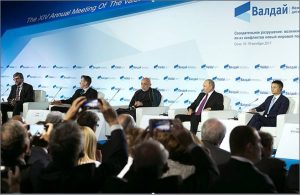 … A harmonious future is impossible without social responsibility, without freedom and justice, without respect for traditional ethical values and human dignity. Otherwise, instead of becoming a world of prosperity and new opportunities, this “brave new world” will turn into a world of totalitarianism, castes, conflicts and greater divisions.

Today, growing inequality is already building up into feelings of injustice and deprivation in millions of people and whole nations. And the result is radicalisation, a desire to change things in any way possible, up to and including violence.

By the way, this has already happened in many countries, and in Russia, our country, as well. Successful technological, industrial breakthroughs were followed by dramatic upheavals and revolutionary disruptions. It all happened because the country failed to address social discord and overcome the clear anachronisms in society in time. 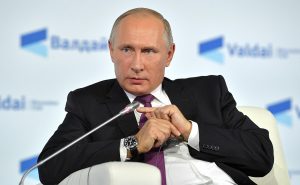 Revolution is always the result of an accountability deficit in both those who would like to conserve–to freeze in place the outdated order of things that clearly needs to be changed–and those who aspire to speed the changes up, resorting to civil conflict and destructive resistance.

Today, as we turn to the lessons of a century ago, namely, the Russian Revolution of 1917, we see how ambiguous its results were, how closely the negative and, we must acknowledge, the positive consequences of those events are intertwined. Let us ask ourselves: was it not possible to follow an evolutionary path rather than go through a revolution? Could we not have evolved by way of gradual and consistent forward movement rather than at a cost of destroying our statehood and the ruthless fracturing of millions of human lives.

However, the largely utopian social model and ideology, which the newly formed state tried to implement initially following the 1917 revolution, was a powerful driver of transformations across the globe (this is quite clear and must also be acknowledged), caused a major revaluation of development models and gave rise to rivalry and competition, the benefits of which, I would say, were mostly reaped by the West.

I am referring not only to the geopolitical victories following the Cold War. Many Western achievements of the 20th century were in answer to the challenge posed by the Soviet Union. I am talking about raising living standards, forming a strong middle class, reforming the labour market and the social sphere, promoting education, guaranteeing human rights, including the rights of minorities and women, overcoming racial segregation, which, as you may recall, was a shameful practice in many countries, including the United States, a few short decades ago…