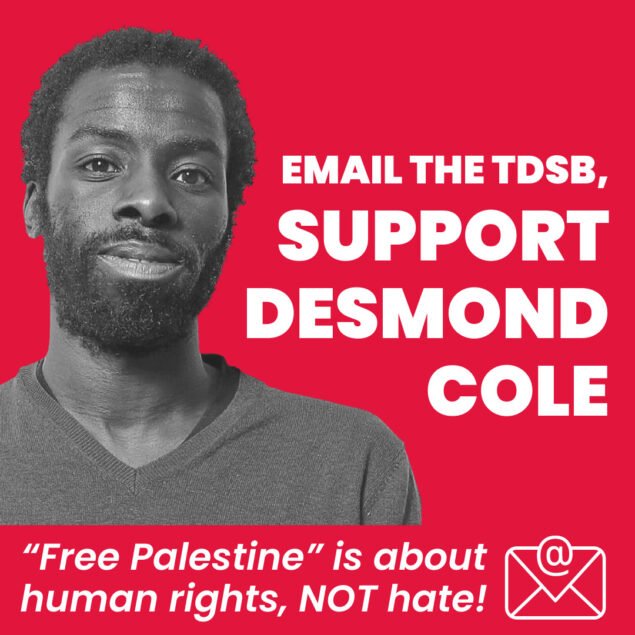 Executive officer at the Ontario Secondary School Teachers’ Federation (Toronto) Jason Kunin recently posted to Facebook: “It seems that as a result of Desmond Cole’s unscripted calls of ‘Free Palestine’ during a TDSB [Toronto District School Board] conference in late September, the Board has implemented a temporary ban on ALL outside guest speakers, even for virtual events, out of fear that someone somewhere might say ‘Free Palestine.’ After all, that would clearly be antisemitic.” Below his statement Kunin cheekily posted a photo of five Orthodox Jews in religious garb standing with a placard that said, “Free Palestine”.

Executive officer at the Ontario Secondary School Teachers’ Federation (Toronto) Jason Kunin recently posted to Facebook: “It seems that as a result of Desmond Cole’s unscripted calls of ‘Free Palestine’ during a TDSB [Toronto District School Board] conference in late September, the Board has implemented a temporary ban on ALL outside guest speakers, even for virtual events, out of fear that someone somewhere might say ‘Free Palestine.’ After all, that would clearly be antisemitic.” Below his statement Kunin cheekily posted a photo of five Orthodox Jews in religious garb standing with a placard that said, “Free Palestine”.

A prominent author and activist, Cole was attacked viciously when he said “free Palestine” during a recent antiracism talk for TDSB educators. Canadian Friends of Simon Wiesenthal Center (FSWC) claimed Cole supported a movement with a “long history of antisemitism, violence against Jews and promoting the elimination of Israel.”

In response Cole wrote a powerful article on the history of anti-Palestinian racism within the TDSB. It began:

“A Black student is suspended from school for saying the words ‘Free Palestine’ during morning announcements. A book that includes journal entries of Palestinian children is banned from school libraries. An educator sharing anti-oppression resources on Palestine for colleagues on an opt-in basis is put under investigation and his mailout is cancelled. A student who comes to class wearing a keffiyeh—a traditional Palestinian scarf—is told to remove it or get out. Students who object to history lessons that erase Palestinian existence are told they are antisemitic.”

A few days later William Paul published a commentary about anti-Palestinianism at the TDSB. Paul reported that the TDSB follows the anti-Palestinian IHRA definition of anti-Semitism and learning material on its website affirms that “Demonizing Israel, home to the world’s largest Jewish population, is no different than demonizing Jews.”

In an inspiring sign of pushback, dozens of students at Marc Garneau Collegiate Institute held a walkout and rally on Friday against anti-Palestinian racism in the TDSB. In response FSWC tweeted, “we are dismayed by this walkout at Marc Garneau Collegiate Institute, where students promoted a genocidal slogan that calls for the destruction of Israel and the annihilation of the Jewish people. The fact that students were supported by staff, as seen below, is shocking and unacceptable.” In another tweet they added, “FSWC is calling on the TDSB to address the increasingly hostile environment, rife with antisemitism, it has allowed to fester for Jewish staff and students.”

FSWC is attempting to erase Palestinians from existence by privileging the hurt feelings of supporters of Israel. They are arguing that to even acknowledge the existence of Palestine is to be anti-Semitic.

Such anti-Palestinian racism is all too common among Canada’s supposed intelligentsia. Simply saying the word Palestine is considered a threat by some. In August 2020 the CBC apologized for using the word Palestine in an interview with an author who published a graphic novel titled Palestine. “I referred to the Palestinian territories as ‘Palestine,’ we apologize”, explained The Current guest host Duncan McCue at the beginning of the next day’s episode.

A stark recent example was the first ever National Summit on Anti-Semitism. The July conference was a response to the largest ever outpouring of solidarity with Palestinians in Canada. After protests in two dozen cities on May 14 and 15 the Centre for Israel and Jewish Affairs (CIJA) began pushing for the summit. Led by long time anti-Palestinian activist Irwin Cotler, the summit was a transparent effort to deflect criticism from Israel’s ethnic cleansing, violence and apartheid. It was also an encouragement of racism against Palestinians, Arabs and Muslims. As part of their push for the summit, CIJA and B’nai B’rith argued that anti-Semitism was being “imported” to Canada, which was a coded reference to Arab and Muslim immigrants.

Despite the racism driving the summit, few argued against it. Instead, some called to make the meeting more inclusive as if the entire event wasn’t motivated by anti-Palestinianism.

It’s time to directly challenge the Israel lobby’s racism disguised as fighting racism. Until more and more Canadians are willing to mock CIJA, FSWC and B’nai B’rith’s spurious anti-Semitism claims, expect the TDSB to continue canceling public events out of fear someone may say “free Palestine”. 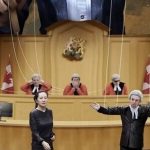 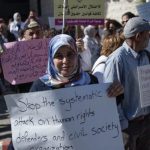