A top military adviser and former head of the armed forces of Poland has told Gazeta Prawna news that he has “completely withdrawn” his previous views favoring providing more military assistance and political support to the government of Ukraine. General Waldemar Skrzypczak spoke to the newspaper briefly on April 16. On April 17, Gazeta Prawna will publish a feature interview with him.

His change of view is prompted by the law passed by the Ukrainian Parliament on April 9 glorifying World War Two collaborators with Nazi Germany. It follows an address to the Verkhovna Rada of Ukraine on April 9 by Polish President Bronislaw Komorowski in which the president voiced strong support for Ukraine, including its military ambitions against the pro-autonomy movement in the east of the country. 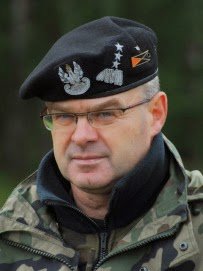 Skrzypczak told Gazeta Prawna, “A few hours later, the Ukrainian parliament passed a law glorifying the Ukrainian Insurgent Army (UPA). At this point, I realized that Ukraine does not consider the Polish people. I’m talking of what happened in Volhynia, the slaughter of 100,000 Poles by the UPA [in 1943 and 1944]…

“The UPA murdered my uncle, nailing him with forks to the barn door. From what I know, he died three days later. Their savagery was beyond human imagination. Nazi Germany did not come up with what those Ukrainians were doing(…)

“I wonder what future the president of Ukraine Poroshenko is building for Ukraine. On a foundation of bloodthirsty nationalism? This is terrible.

“It has long been said that Ukrainians should get rid of nationalism, because if they do not, collaboration with Poland will be very difficult, in fact impossible.”

General Skrzypczak is no pacifist, or friend of Russia. Born in 1956, he was the commander of Polish Land Forces from 2006 to 2009. Since September 2011, he is an adviser at the Polish Ministry of National Defence. In June 2012, he became deputy minister of defence, responsible for armament and modernisation. In an August 2012 interview, he outlined his plans for a continuing and vast modernization and expansion of Poland’s military.