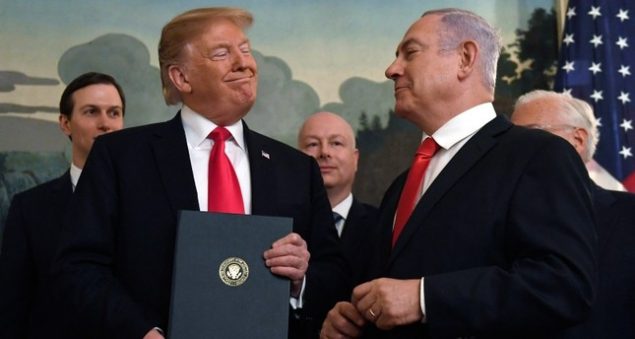 A whole book could be written about all the ways the Trump Plan for the hapless Palestinians contravenes international law.

On Tuesday, an American president being impeached for abuse of power announced a historic plan for Israel-Palestine alongside an Israeli prime minister who was just indicted for bribery and corruption. (The Israeli parliament declined to grant Netanyahu immunity, and he withdrew the request, allowing the formal indictment to be filed.)

The plan was drafted by a team allegedly led by Jared Kushner, Trump’s son-in-law, who has no real government position and is a far right wing Israel nationalist, in consultation with the far right wing Likud government of Israel, headed by PM Binyamin Netanyahu. The Palestinians declined to be involved in what was obviously a crooked and fixed process that gave away their East Jerusalem to Netanyahu before it even got going.

Just as the Palestinian people were not consulted in 1917 when the British cabinet adopted the Balfour Declaration, designating geographical Palestine as a site for a “homeland” for the Jewish people, so the doomed-to-failure Trump plan also did not consult them about their own fate. It is no longer the age of Western Empires when pudgy men in pinstripe suits in the drawing rooms of London and Paris drew the borders of other people’s countries and dictated the forms of their political lives.

If you want to know what Iran is really about, it is mostly a protest against these imperial injustices. For that reason, the Trump Plan is a huge boon to Iran, since it makes transparent precisely the “global arrogance” of Washington that Iran is always going on about.

In turn, imperial practices were and are underpinned by a latent White Nationalism, such that they attempt to keep the brown and black people subordinate and to reserve wealth and privilege and global power to the “white” European and European-descent nations. Even though Jews in twentieth-century Europe and the United States were often seen as “not Aryans” and “not White,” nowadays the usefulness of Israel to imperial designs on the region has led to the Israelis being coded as “white” and the Palestinians as “brown.” If you want to understand how millions of people can daily be screwed over as the Palestinians are, it isn’t actually much more complicated than that.

Although the Trump Plan uses the diction of allowing a Palestinian “state,” the entity proposed does not have control over its borders or airspace or coastal waters and cannot make treaties with other states or go to the United Nations over continued Israeli violations of international law. In other words it is not a state at all. It is a Bantustan of the sort the Apartheid South African government created as a way of unloading its African population so that they could be stripped of South African citizenship.

This map is verrrrry generously shaded to give appearance of contiguity.

100% final map will appear closer to archipelago map on the right. pic.twitter.com/pLcaWak4R2

Palestine president Mahmoud Abbas is said to have reacted to the Plan’s unveiling by calling Trump a “dog, the son of a dog.”

The Trump Plan is full of measures that constitute War Crimes in international law, and a systematic pattern of War Crimes is categorized as a Crime against Humanity. The latter term is the one appropriate to the Trump Plan. Here are the War Crimes the Plan proposes:

1. Israel has flooded 400,000 of its citizens into the Occupied Palestinian West Bank, where they have stolen Palestinian land and built squatter-only settlements on it, where Palestinians are not allowed to live. These Israeli squatters are often armed and some of them routinely stage attacks on Palestinian villages or commit sabotage against Palestinian orchards and agriculture.

This squatting on Palestinian land contravenes the Fourth Geneva Accord of 1949 on Occupied Territories, which forbids transferring populations from the Occupying Power into the occupied lands:

“The Occupying Power shall not deport or transfer parts of its own civilian population into the territory it occupies.”

This rule was to prevent the repetition of the war crimes committed by Nazi Germany, which occupied other lands and sent Germans in to settle them.

The Trump plan rewards Israel’s illegal activities, saying “Approximately 97% of Israelis in the West Bank will be incorporated into contiguous Israeli territory.”

2. The Trump Plan allows Israel to annex about a third of the Occupied West Bank, on which Israeli squatters have squatted. Annexation is an act of aggression, forbidden by international law. By the Fourth Geneva Convention, Israel cannot actually deprive Occupied Palestinians of their land rights by simply declaring those lands “annexed.”

3. The Plan envisages depriving many Israeli citizens of Palestinian heritage of their Israeli citizenship, which amounts to denaturalization. Since they would be instead given “citizenship” in a “state” that no one will recognize and which is a Bantustan rather than a state, in which they will enjoy no actual rights over their own property because Israel won’t permit the Bantustan to so guarantee them, that would amount de facto to forcing these Israeli citizens into statelessness, which contravenes the UN Convention on the Reduction of Statelessness, signed by 75 member states.

4. The Plan envisages that the Palestinian Bantustan will be disarmed, which means that Palestinians will be deprived of the right of self-defense. The Right of Self-defense is recognized in Chapter 7 of the United Nations Charter:

“Article 51. “Nothing in the present Charter shall impair the inherent right of individual or collective self-defence if an armed attack occurs against a Member of the United Nations, until the Security Council has taken measures necessary to maintain international peace and security.”

Palestine was in 2012 granted by the UN General Assembly non-member observer state status, like the Vatican, which puts it under the authority of the Charter.

5. The enclaves to which the Palestinians would be consigned give them no control over their lives, as B’Tselem pointed out.. The Israeli human rights organization pointed out,

“With no territorial contiguity, Palestinians will not be able to exercise their right to self-determination and will continue to be completely dependent on Israel’s goodwill for their daily life, with no political rights and no way to influence their future. They will continue to be at the mercy of Israel’s draconian permit regime and need its consent for any construction or development. In this sense, not only does the plan fail to improve their predicament in any way, but, in fact, it leaves them worse off as it perpetuates the situation and gives it recognition.”

Article 12 of the International Covenant on Civil and Political Rights puts the right to freedom of movement into treaty law: “(1) Everyone lawfully within the territory of a State shall, within that territory, have the right to liberty of movement and freedom to choose his residence.”

Actually a whole book could be written about all the ways the Trump Plan for the hapless Palestinians contravenes international law. Since the over-all rubric is Apartheid, and Apartheid is a War Crime in the Rome Statute that underpins the International Criminal Court, the whole plan is a series of War Crimes, which amount in the aggregate to a crime against humanity.

Juan Cole teaches Middle Eastern and South Asian history at the University of Michigan. His new book, The New Arabs: How the Millennial Generation Is Changing the Middle East (Simon and Schuster), will officially be published July 1st. He is also the author of Engaging the Muslim World and Napoleon’s Egypt: Invading the Middle East (both Palgrave Macmillan). He has appeared widely on television, radio and on op-ed pages as a commentator on Middle East affairs, and has a regular column at Salon.com. He has written, edited, or translated 14 books and has authored 60 journal articles. His weblog on the contemporary Middle East is Informed Comment. 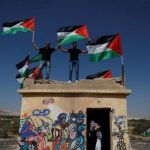