Kiev’s denials can be understood, but why did western media go along with them when there was overwhelming evidence to the contrary? 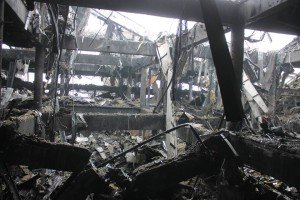 The Ukrainian government and the Western media finally brought themselves to admit on 22nd January 2015 that Donetsk airport has been captured by the rebels. I say finally because the rebels actually captured the airport on 15th January 2015.

Thus we were successively told that two floors of the new terminal (where the Ukrainian troops made their last stand) had collapsed, that the runway had been destroyed and that communications were impossible because of fog.

Eventually, once the pretence could no longer be sustained, the government said the airport had been abandoned because it was so badly wrecked it was no longer worth defending.

That is not completely untrue. As the video of the airport we previously published shows, it has indeed been wrecked. However, the government’s claim it abandoned the airport because it is wrecked is shown to be untrue by the lengths to which the government went to pretend the airport was still under its control.

Whilst the Ukrainians were making these claims, the rebels were providing their own film and photographs. These showed their flags on the new terminal building. Zakharchenko, the Donetsk rebel leader, meanwhile was filmed haranguing a captured Ukrainian officer at the airport and posing with a captured Ukrainian flag he offered to return to Poroshenko.  Russian journalists and the independent British journalist Graham Phillips visited the airport and confirmed its capture. Some filmed themselves there.

In other words, whilst the Ukrainians were pretending to be still in control of the airport, conclusive evidence existed that this was untrue. What is extraordinary about this affair is that the Western media nonetheless went along with the Ukrainian pretence they were still in control of the airport. Reports from the rebels, the Russians and Graham Phillips, clearly showing the airport controlled by the rebels, were largely ignored. Instead, the Western media uncritically reproduced the Ukrainian claims they still controlled the airport.

This misplaced faith in what the Ukrainians tell them has led the Western media repeatedly astray.

During the battles of July and August, it was obvious to me from comparing Ukrainian and rebel reports and from checking them against a map that the rebel reports were consistently more reliable and that the Ukrainian offensive was going nowhere.

The Western media saw none of this. They chose to believe instead the string of fictitious “victory” communiques the Ukrainians were giving them. The result was that when in the last week of August the Ukrainians were defeated, it came as a shock. The only way to explain it was by talking up stories of a Russian invasion of Ukraine by whole units of the Russian army.

This has now become in the West an article of faith, though actual evidence for it does not exist. However, to admit that would mean admitting that all the Western media’s previous reporting of Ukrainian “victories” was wrong. That is not something the Western media is able to do.

The latest episode at Donetsk airport shows no lessons have been learnt. The Western media still prefers to take its information from Kiev. This has serious consequences. Through the Western media, the Western public and Western governments are being told the story of the Ukrainian conflict as Kiev tells. This despite the fact that what Kiev says is repeatedly shown to be untrue.

There is also a more immediately tragic consequence. Whenever a government says things about a war which it knows are untrue, it is going to try to make them true before it gets found out.

In the case of the war in the summer, that involved throwing the Ukrainian army repeatedly against rebel positions in Donetsk and Lugansk and elsewhere as the Ukrainians tried to make true their claims of victory before Ukrainian Independence Day on 24th August 2014. The losses as a result were appalling, with even Poroshenko admitting the Ukrainian army lost 65% of its armoured vehicles.

The same thing appears to have happened again at the airport. Having lost control of the airport on 15th January 2015, the Ukrainian government launched a succession of counter attacks to retake it before it became obvious its claims to control the airport were untrue. They all failed, apparently with heavy losses. The rebels claim to have found 597 dead bodies in the debris.

Fighting at the airport has gone on since May. Not all the dead bodies may belong to soldiers killed in the last few days or weeks. Also, this rebel claim has not yet been independently verified. Even the Ukrainians however admit to losses in this battle. It is a high price to pay to maintain a fiction which it took just six days to prove untrue.