Timothy Snyder and the distinction between writing history and manufacturing propaganda

The following is an open letter by Tina Jennings to the editor of TIME magazine. The letter is originally published in Russia Insider, Oct 18, 2015.

Your recent op-ed piece by Timothy Snyder, ‘The real reason Russia is ‘helping’ Syria’ (Sept 30, 2015), was so convoluted, so superficial, and so loaded with cliches and misleading statements, that one can’t help but feel slightly embarrassed for the writer. 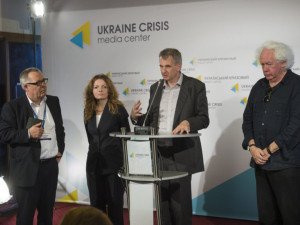 Full disclosure: When I read this piece, flipping through TIME at an airport newsstand, I experienced that awkward moment when you realise that the thing you’re grimacing about was written by someone you once knew. I knew Tim Snyder when we were both graduate students at Oxford more than 20 years ago – he working on Central Europe, and me on Russia.

Now he is Professor Timothy D. Snyder, the Bird White Housum Professor of History at Yale University. But back then he was just Tim, the American boyfriend from Ohio of an American friend of mine from Oregon, and he walked around St Antony’s College in a baseball cap and loafers, looking just like the ordinary frat boy abroad that he was.

Snyder writes that, when Russia seized Crimea, “confusion prevailed in the West… and we are once again perplexed” by Russia’s actions in Syria. In fact, beyond Washington DC, people do not seem at all perplexed by Russian moves in Syria; increasingly, the feeling is one of relief that finally someone’s delving in to clean up the mess. To cite just one example, in the UK, a poll taken in the last few days showed that over 70% supported Russian moves in Syria.

We would do well to take Putin at his word now and again. He chooses his words exceedingly carefully and doesn’t do sound bites. The result of this approach is that Putin not only means what he says, he also says what he means. This is so refreshing by the standards of ordinary politicians we’re accustomed to in the West that it may feel perplexing, even disorientating, for some.

So when Putin warned at the UN two weeks ago that “we can no longer tolerate the state of affairs in the world today”, a remark that resonated with millions of people around the world, he meant exactly that. No need for faux bafflement from across the Atlantic.

Why? Because so many of us have that 1939 feeling all over again… even those of us who’ve never known it. Professor Snyder, as a historian of the Holocaust and Central Europe, is someone who ought to recognise it.

In trying to link Ukraine and Syria together, Snyder invokes “Russian doctrine”, whatever he means by that, before elaborating rather sophomorically: “authoritarian leaders are legitimate, while popular resistance is not” (as though popular resistance in Donbass was not triggered by a Western-orchestrated regime change in Kyiv in February 2014, which we all watched unfold, incredulously, on TV during the Sochi Olympics).

In the Russian context, the term ‘doctrine’ is normally restricted to military affairs and refers to set printed texts, periodically reviewed, wherein the Russians clearly spell out exactly what and whom they consider to be threats to their national security, leaving very little room for ambiguity or confusion as to what they will react to – the opposite, in fact, of what Snyder accuses them of.

Snyder’s piece is replete with spurious claims of one kind or another, and laced with the usual, Fox News-type, cliched exaggerations of a putative Russian threat in order to justify something that went badly wrong in Western policy, or at least not according to Washington’s plan. This is disappointing stuff, particularly coming from the pen of someone who really ought to know better:

* “to hinder a democratic movement with military action” : “democratic” is what Viktor Yanukovich’s election as Ukrainian president was in 2010 (and recognised as such by international election observers), whether Snyder liked it or not; and “democratic” is what Yanukovich’s almost-certain defeat in Ukraine’s presidential election would have been this year, had a cabal of unelected US and EU bureaucrats not orchestrated a coup d’etat in that once-peaceful country;  “military action” is what Ukraine’s armed forces have been waging on its own citizens in Donbass since Poroshenko, a former minister in Yanukovych’s cabinet, was installed last year.

* misleading statements : “the Crimean naval base is now used to “project power southwards” – as though Sebastopol has not been Russian Navy headquarters since before the French Revolution

* glaring unexplained contradictions: that Putin “opposes secular leaders”, although secular government is precisely what Assad represents in Syria in his struggle against Islamic extremism

* outright, unsubstantiated lies : that Putin’s “friends in Europe include fascists”, a claim so easily refuted when the whole world noted some time ago already that the only people shaking hands with Ukraine’s neo-Nazi politicians are US senators and assistant secretaries of state.

Further on, Snyder disingenuously sets out to confuse his non-specialist TIME readers, by conflating membership of the EU and NATO, two very important distinctions that he understands only too well – oddly, in an article about military action in Europe and the Middle East, he never once mentions NATO.

In his UN speech, it was not the EU that Putin accused of “heedless expansionism” (as Snyder falsely claims), but NATO, a military alliance that absorbed another 12 countries since 1999 via the EU’s back door while invoking collective defence and security.

How insulting to TIME’s readers that Tim has so blatantly tried to “dumb down” the facts for them. (And since he seems to be all about wrapping himself in the cloak of democracy and popular resistance, how many of these small countries had referendums in which their populations could vote on NATO membership? Right… none).

On the one hand, “domestic public opinion”, we’re told, is the most important factor for Putin – at the same time as he supposedly rides roughshod over his adoring electorate in that unique authoritarian way of his.

Russia, Professor Snyder pronounces, “is a television culture”… (let’s just ignore, shall we, the staggering irony of an American describing Russia’s culture in this way). He continues, almost incredulously: “Russian television news is devoted almost entirely to the world beyond Russia”. Yes, it is entirely accurate that Russia is not remotely as self-absorbed as America.

And it’s also clear at this point that Snyder appears to have little familiarity or experience of Russia in the 21st century and remains perennially stuck in the Stalinist period he’s read so much about in college (another example: “the Kremlin is telling its people stories about the infallibility and immortality of a leader”).

Unfounded, unsubstantiated, misleading comments like these speak volumes about Snyder’s own stereotypical, crude, unreconstructed views, but say nothing at all about the sophisticated media environment in contemporary Russia. [For a more informed, less bias-driven view on Russia’s media scene, especially as it relates to the Syrian conflict, see Rachel Polonsky’s recent piece in Prospect.]

Remarkably, Snyder tells us that “in the last few days, Russian television has completely changed the subject: from Ukraine to Syria”, as though this somehow differs in any way from the way that every single country has reported global news since Putin’s speech at the UN – where he clearly stole the show.

But it looks like I’m not the only one “perplexed” by some of Snyder’s far-fetched claims and accusations being passed off as absolute historical truths. To judge by some of the headlines – ‘Timothy Snyder’s Lies‘ (Jacobin Magazine, Sept 2014), ‘Historian Timothy Snyder falsifies history’, and so on – I’ve got some company. Snyder leaves behind a trail of controversy, and that’s putting it mildly.

“In the writings of Timothy Snyder we are confronted with an intellectually unhealthy and dangerous tendency: the obliteration of the distinction between the writing of history and the manufacturing of propaganda in the service of the state” (David North, The Russian Revolution and the Unfinished Twentieth Century, p. 330).

*  Statement by Grover Furr, on the occasion of Timothy Snyder’s appearance at Kean University in New Jersey on April 17, 2012