Three women on their fight for abortion rights in Poland 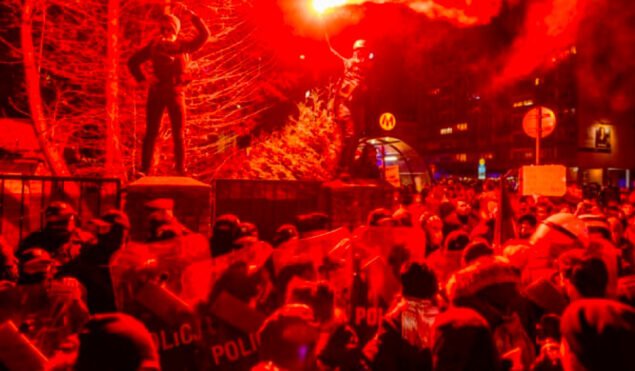 Academic Agnieszka Graff, lawyer Karolina Więckiewicz and gynaecologist Anna Parzyńska discuss their fight for abortion rights. An attempt by authorities to impose a near-total ban on terminations has sparked mass demonstrations across the country.

On 22 October, Poland’s constitutional court ruled to ban abortions in cases of congenital foetal defects, even if the foetus has no chance of survival. The decision by the court’s 15 pro-ruling party judges, many of them appointed unlawfully, would allow terminations only in instances of rape, incest and when the mother’s life is at risk – a tiny fraction of cases. Women’s groups estimate that an additional 200,000 Polish women have abortions either illegally or abroad each year – Poland has some of Europe’s strictest abortion laws.

The ruling sparked an immediate reaction. Across the country, hundreds of thousands of demonstrators, mainly women and young people, took to the streets in the largest protest movement in the three decades since the fall of communism. The writer and activist Agnieszka Graff tells Anushka Asthanaabout the protests, and the influence the Catholic church has had on Poland’s increasingly restrictive abortion laws.

Anushka also talks to Karolina Więckiewicz, a lawyer and human rights defender who set up the group Abortion Dream Team. As well as informing people about how to get abortion pills via the internet, they also point them towards organisations that can help arrange travel to other EU countries where they can have the procedure. Gynaecologist Anna Parzyńska describes the impact the ruling will have on her work. Women are petrified when they come for an abortion, she tells Anushka: “They feel like the country is totally against them.”

The Organization for world Peace; By Alison Dobslaw; Dec 7, 2020