Thousands rally in Luhansk against the economic blockade by Kyiv

More than 2,000 students, public sector employees and pensioners staged a protest action in the center of the city of Luhansk in the east of Ukraine on Wednesday against Kiev’s economic and financial blockade of the Donbas region. 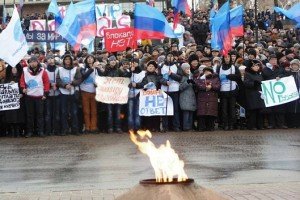 2,000 people rally in Luhansk against the blockade of the Ukraine government and army, photo from Facebook

The rally slogan was ‘Stop the blockade’ and was held at the city’s monument to Revolutionary Fighters. Participants brandished slogans reading “No to genocide in Luhansk,” “Let Donbas live and work.”

Residents of other districts of the region, including Krasnodonsk, Lutuginsk and Sverdlovsk arrived in the city to support the protest action.

The rally participants demanded from Ukrainian authorities the payment of all wage and pension debts that have been accumulated during the hostilities in the region.

The head of the self-proclaimed Luhansk People’s Republic (LPR), Igor Plotnitsky, promised that the situation would return to normal. “With God’s help we will win. We will by all means return all the deposits that rightfully belong to our people,” he said.

The Ukrainian government’s executive order according to which the payment of social security benefits and pensions to the people residing in the territories controlled by the self-proclaimed LPR is suspended took effect on December 1.