Thousands of people have taken to the streets in Ukraine’s eastern city of Donetsk to protest against Kiev’s military operation in the region. The press office of the Donetsk People’s Republic said at least 10,000 people marched through the city on Wednesday, June 18, calling on the Ukrainian government to stop its military operations.

Today, the Kyiv regime has ended a very short-lived ‘ceasefire’ in southeast Ukraine accompanied by an ultimatum on autonomy forces to surrender. The Guardian reports a resumption of military operations by the regime. The ‘ceasefire’ ruse was, once again, presented by misleading or gullible media in Europe and North America as a ‘peace’ initiative by the regime.

Among those who participated in the protest march were some 3,000 miners from Donetsk, Gorlovka, Yenakiyevo and Torez coal mines. The protesters chanted “No more war” and called for independence from Ukraine. (A print report on their action with photos and video is here on Russia Today.)

Ukrainian troops have been carrying out military operations since mid-April to suppress pro-Russia protesters in the east of the country.

The violence intensified after the two regions declared independence from Ukraine on May 12 following local referendums, in which the provinces’ residents voted overwhelmingly in favor of independence from Kiev. The referendums were called illegal by Ukrainian authorities.

The government in Kiev says it is targeting armed protesters, but reports say many civilians have been caught in the shelling that has been going on for days.

According to figures, published by Ukraine’s Health Minister last week, the death toll from clashes between Ukrainian forces and pro-Moscow forces has reached 270 in the eastern provinces of Donetsk and Lugansk since the operations started this spring.

There is pressure on President Petro Poroshenko to cool his regime’s civil war in the east. He has fired his foreign minister for making derogatory remarks last week against President Vladimir Putin of Russia. But it’s far from clear how far the regime will press its war.

An Associated Press report has Poroshenko saying, “I can say that the period of the cease-fire will be rather short. We anticipate that immediately after this the disarming of the illegal military formations will take place.” He was referring to disarming the self-defense forces in Donetsk and Luhansk regions, not the fascist militias that are fighting alongside the Ukraine army, including in some cases leading army units.

Poroshenko delivered himself to the rightists during his election campaign and neither he nor NATO could end their captive roles easily. Nor are they showing  any willingness to do so. Here is a new commentary on this dilemma written by Sergei Kirichuk of the Ukraine political association Borotba.

Here is another video of the antiwar march of coal miners and other citizens in Donetsk on June 18: https://www.youtube.com/watch?v=0_q3FaFIoIs#t=91

And here is a ten minute report by Vice News on the conditions in the city of Slavyansk. The city has been under heavy artillery and sometimes air attack for weeks, forcing residents to flee to an unknown future. 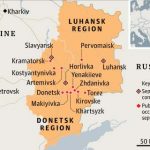