By New Cold War
Posted February 28, 2016
In Russia
Thousands march in Moscow to commemorate murder one year ago of Boris Nemtsov (with photos and video)2016-02-282016-02-28https://newcoldwar.org/wp-content/uploads/2020/05/2020-NCW-Logo-New.pngNew Cold War: Know Betterhttps://newcoldwar.org/wp-content/uploads/2016/02/March-in-Moscow-Feb-27-2016-commemorates-one-year-anniversary-of-shooting-in-Moscow-of-Boris-Nemtsov-a-former-aide-to-Presiden.jpg200px200px

Thousands marched in Moscow in memory of prominent opposition figure Boris Nemtsov, who was gunned down in the heart of the Russian capital last year. 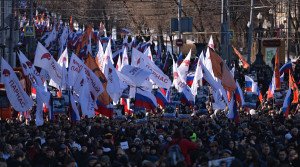 Preliminary media reports estimated that up to 30,000 people took part in the memorial, with the march sanctioned by the capital’s authorities. Police put the number of attendees at around 7,500. The march finished at around 4pm Moscow time, reaching the Bolshoi Moskvoretsky Bridge, where the politician was murdered.

Several opposition politicians led the crowd, holding banners that read: “He died for freedom” and “Russia will be free.” People chanted slogans in memory of the slain politician and against his suspected killers.

“Boris, you are with us. Your fight carries on,” said Mikhail Kasyanov, Nemtsov’s close ally and head of opposition People’s Freedom (PARNAS) party. Activists collected signatures to set up a memorial plaque at the site of Nemtsov’s murder.

No incidents were reported during the march, police said.

On February 27, 2015, Nemtsov was shot dead while crossing the Bolshoi Moskvoretsky Bridge, near the Kremlin. The 55-year-old politician was walking late in the evening with his top model girlfriend. An assailant in a car shot him four times in the back.  The assassination prompted a thousands-strong march in the Russian capital in 2015, with demands to find and punish the killers. In a public address President Putin personally pledged to punish those responsible for the organization and execution of the murder.

The probe into the most high-profile and outrageous murder in recent years was completed last month. The suspects – five men from Chechnya – all face charges of a contract murder within a criminal group and illegal possession of firearms.

A separate case had been launched against suspected organizer of the hit Ruslan Mukhutdinov and his yet-unidentified possible accomplices.

One of the suspected killers, Zaur Dadaev, reportedly told investigators that the murder was revenge for Nemtsov’s “negative comments on Muslims and Islam,” and the public condemnation of Islamists who killed the journalists from the Charlie Hebdo magazine in France in particular. Later Dadaev retracted his testimony.

The other suspects denied any involvement in the case.

In comments on the Investigative Committee’s statement, the lawyer representing Nemtsov’s family disagreed with the main conclusion, telling RIA Novosti that “Mukhutdinov is just one of the organizers and he is one on the lowest rank. He only used to work as a driver for [one of the suspects] Ruslan Geremeyev.”

Many believe Nemtsov’s murder was political. Grigory Yavlinsky, Nemtsov’s fellow politician in the opposition block and head of the Yabloko party, said Saturday that Nemtsov was killed “for purely political reasons, as an opponent of the state policy”.

“He did not bother me at all. He’s not my league,” Kadyrov said in an interview. When initial investigations began, many Nemtsov’s allies pointed toward Kadyrov as the mastermind of the murder.

Boris Nemtsov was a regional governor and a deputy PM under President Boris Yeltsin. In recent years he had turned into an opposition politician occupying a seat in the legislature of central Russia’s Yaroslavl Region.

Rallies in memory of slain politician took place in many other cities, Saratov, Pskov, Orlov, Vladimir, Chelyabinsk and Ryazan among them, Interfax reports. Up to 2,000 people gathered at Field of Mars park in the center of St Peterburg to pay tribute to Nemtsov. People sang and chanted anti-government slogans.

Outside Russia, commemoration ceremonies were held in London, Kiev and other cities.

Vladimir Putin’s address to the Russian people following adoption of a joint statement by Russia and U.S. on SyriaFeature Articles, Multipolarity, Russia 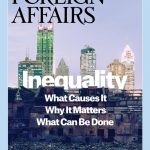