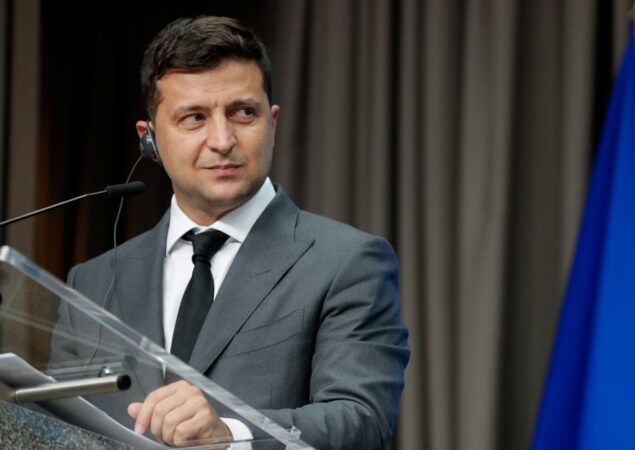 Once the entire legal system is harnessed to the support of “reform,” Ukrainian president Volodymyr Zelensky, or one of his successors, will be able to more easily suppress political opposition and irksome media criticism.

In the year following his election, Ukrainian president Volodymyr Zelensky’s approval has fallen from 73 percent to a new low in the latest local elections. Although several run-off elections have yet to be held, it is already clear that the president’s party, “Servant of the People,” suffered a major defeat, being unable to win a single mayoral race or even a majority in any regional parliament or city council.

Such a precipitous fall from electoral grace can be attributed in part to professional incompetence and failure to keep his campaign promises, but in even greater measure it stems from Zelensky’s betrayal of his core electorate, which lies in the predominantly Russian-speaking East and South. Since Petro Poroshenko had run on an arch-nationalist agenda, proclaiming “It’s Poroshenko or Putin,” Zelensky’s appeal, stemmed largely from the fact that he was running as the anti-Poroshenko. Ukrainians were tired of the previous president’s efforts to divide the nation along the lines of his campaign slogan—“Army, Language, Faith”—and handed Poroshenko a resounding defeat in every region of Ukraine, except Lviv.

Now, Zelensky seems to think that he has found a way to return to center stage by declaring Ukraine’s entire Constitutional Court a threat to national security. “In a matter of hours,” the president told his party faction in the parliament, “the judges of the Constitutional Court have set the country on the edge of catastrophe. It will either be pulled into bloody chaos, or the state as a system of transparent rules and agreements will cease to exist.”

What did the Constitutional Court, the nation’s final authority in constitutional matters, do that was so awful? It set aside eighteen articles of the law “On Preventing Corruption.” In doing so it severely reduced the purview of the National Anticorruption Bureau of Ukraine (NABU), which was set up with much fanfare in 2015. This is important because the NABU is the centerpiece of an entire anticorruption architecture designed and put in place at the insistence of the West. Along with half a dozen other agencies (National Agency for the Prevention of Corruption, The Specialized Anticorruption Prosecutor, State Investigative Bureau, Supreme Anticorruption Court, and Agency for the Search and Management of Assets, the Bureau of Financial Investigations), it provides mutually reinforcing prosecutorial, investigative, and criminal support outside of Ukraine’s traditional legal structures. The system was designed in this way so that investigations would not get bogged in what Western governments deem to be a hopelessly corrupt Ukrainian legal system.

Yet, despite spending more than seven billion hryvnia (more than a quarter-billion dollars) within the past five years, not a single high-profile official has been prosecuted. This had led a number of Ukrainian analysts to suggest that the real purpose of these institutions may, in fact, be to blackmail the officials it investigates into acting and voting in a manner that the government deems congenial, rather than bringing them to justice.

According to Zelensky, the threat to Western reforms is so severe that all the judges of Ukraine’s Constitutional Court must be replaced and its recent decision voided. It is unclear at this point whether the president is merely seeking to replace the current judges or, as some have suggested, redefine and reduce the functions of the Constitutional Court. While none of this is legal under the Ukrainian constitution, according to the president, saving his reform agenda from court tampering gives him a higher mandate.

Many factors, however, point to this being an invented crisis. For one thing, the court already ruled back in August that the current head of the NABU, Artyom Sytnik, had been appointed in violation of the constitution, yet this ruling was simply ignored. So why did the president have to instigate a crisis now?

Critics suggest that he may be trying to rally his party after its election defeat by providing it with two new enemies—the pro-Russian “Opposition Platform-For Life” led by Victor Medvedchuk, and the pro-Western “European Solidarity” led by former president Poroshenko. The former has re-emerged as the dominant political force in Eastern and Southern Ukraine, while the latter has given new political life to Poroshenko with gains in the Western and Central regions.

By attacking the Court, which has almost no political supporters, Zelensky can also simultaneously appear to be fighting corruption and Russian infiltration. In his appeal for Western support, which was published in The Financial Times, for example, he blamed Medvedchuk for the court’s decisions, since he knows that playing the anti-Russian card will appeal to the West. At the same time, however, inside Ukraine the leader of his party’s faction in the parliament blamed Poroshenko for creating the current system, never mentioning Medvedchuk at all! A neat trick, if Zelensky can pull it off.

The Western response has been divided because of its own conflicts of interest in Ukraine. On the one hand, the heads of key Western legal institutions, like the European Commission for Democracy through Law (The Venice Commission) and the Group of States Against Corruption (GRECO), have stated unequivocally that “terminating the mandate of the judges is in blatant breach of the Constitution and of the fundamental principle of separation of powers. Violating the Constitution, even if for an arguably good cause, cannot lead to a culture of constitutionalism and respect for the rule of law, which the fight against corruption pursues.”

On the other hand, however, the head of the president’s faction in the parliament, David Arakhamia, has stated that the European parliament and the G7 Ambassadors are fully on board with disbanding the current Constitutional Court. One can understand why. The current system of interlocking anticorruption mechanisms was set up under their supervision and is an important mechanism of foreign influence on the political decisions of Ukrainian politicians. Having invested considerable time and effort in promoting its reforms in Ukraine, the West is reluctant to relinquish this leverage. What is at stake in this conflict is therefore not only the separation of powers, a principle that defines modern democracy, but also Ukrainian sovereignty.

Some Western governments seem to believe that it is in their interest to keep a tight control over the direction of Ukrainian reforms so that they can ensure that the country never again gets too close to Russia. But such a single-minded focus carries with it the inherent danger of appearing to serve foreign interests more than Ukrainian interests.

In her essay “Lying in Politics,” Hannah Arendt writes that the pursuit of an objective at any cost may have been the most serious error America made during the Vietnam war. It resulted in  a policy detached from any constraints “ that could limit and control sheer fantasy.” Ultimately, she says, policymakers became so enraptured by their own ideological designs that they did not even care about winning the war. “How could they be interested in anything so real as victory,” she writes, “when they kept the war going for neither territorial gain nor economic advantage, least of all to help a friend or keep a commitment, nor even for the reality, as distinguished from the image, of power?”

There are many similarities to ponder between her critique then and current Western policy in Ukraine. They range from the uncritical adulation that gets showered on the chosen favorites—be it Vice-President Johnson calling Ngo Dinh Diem “the Churchill of Asia,” or Joe Biden calling Poroshenko “the Founding Father of modern Ukraine,” to the tacit willingness to condone the destruction of the rule of law, so long as it is done in the name of European integration.

It is therefore worth thinking about the ultimate purpose of the reforms that Western governments are seeking to impose, in Ukraine and elsewhere. Whose interests do they really serve? Most importantly, are they seen by the people in those countries as serving their interests, and therefore meriting support? In Ukraine, the abysmal ratings of trust for government institutions suggests that they are not. Destroying the Constitutional Court which, contrary to what Zelensky implied in his article in The Financial Times, actually had a higher trust rating than any of the new anti-corruption agencies, can only deepen the distrust that Ukrainians feel toward their government and toward the West.

Let us not pretend that this has anything to do with democracy. Once the entire legal system is harnessed to the support of “reform,” Zelensky, or one of his successors, will be able to more easily suppress political opposition and irksome media criticism. The laws for doing so are already in place. All that is now needed is to tie them to national security by suggesting, as the head of the National Security and Defense Council recently did, that “the aggressor is behind this.” To this Marina Stavniichuk, former president Victor Yushchenko’s representative to the Constitutional Court, asked whether, after disbanding the court and delegitimizing the state, there will be anything left to fight for?

It is therefore ultimately in the best interests of both the West and of Ukraine to allow Ukrainian politics to develop however it sees fit and to rely on its own institutional checks and balances, rather than on ones that are imposed and administered by the West. As we have seen time and again, the West’s failure to trust the institutions of other nations results in those nations eventually turning away from the West, in order to get them back.

Nicolai N. Petro is a professor of politics at the University of Rhode Island. He was a Fulbright Scholar in Ukraine from 2013–14, and is the editor of Ukraine in Crisis (Routledge, 2017). He writes from Ukraine.