There Is No Labour Shortage, Only Labour Exploitation 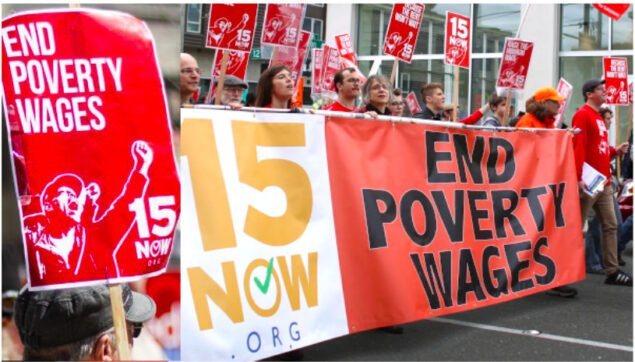 For the past few months, Republicans have been waging a ferocious political battle to end federal unemployment benefits, based upon stated desires of saving the US economy from a serious labour shortage.

For the past few months, Republicans have been waging a ferocious political battle to end federal unemployment benefits, based upon stated desires of saving the US economy from a serious labour shortage. The logic, in the words of Republican politicians like Iowa Senator Joni Ernst, goes like this: “the government pays folks more to stay home than to go to work,” and therefore, “[p]aying people not to work is not helpful.” The conservative Wall Street Journal has been beating the drum for the same argument, saying recently that it was a “terrible blunder” to pay jobless benefits to unemployed workers.

If the hyperbolic claims are to be believed, one might imagine American workers are luxuriating in the largesse of taxpayer-funded payments, thumbing their noses at the earnest “job creators” who are taking far more seriously the importance of a post-pandemic economic growth spurt.

It is true that currently millions of jobs are going unfilled. The US Bureau of Labor Statistics just-released statistics showing that there were 9.3 million job openings in April and that the percentage of layoffs decreased while resignations increased. Taking these statistics at face value, one could conclude this means there is a labour shortage.

But, as economist Heidi Shierholz explained in a New York Times op-ed, a labour shortage happens only if employers raise wages to match worker demands and subsequently still face a shortage of workers. Shierholz wrote, “When those measures [of raising wages] don’t result in a substantial increase in workers, that’s a labour shortage. Absent that dynamic, you can rest easy.”

Remember the subprime mortgage housing crisis of 2008 when economists and pundits blamed low-income homeowners for wanting to purchase homes they could not afford? Perhaps this is the labour market’s way of saying, if you can’t afford higher salaries, you shouldn’t expect to fill jobs.

Or, to use the logic of another accepted capitalist argument, employers could liken the job market to the surge pricing practices of ride-share companies like Uber and Lyft. After consumers complained about hiked-up prices for rides during rush hour, Uber explained, “With surge pricing, Uber rates increase to get more cars on the road and ensure reliability during the busiest times. When enough cars are on the road, prices go back down to normal levels.” Applying this logic to the labour market, workers might be saying to employers: “When enough dollars are being offered in wages, the number of job openings will go back down to normal levels.” In other words, workers are surge-pricing the cost of their labour.

But corporate elites are loudly complaining that the sky is falling, not because of a real labour shortage, but because workers are less likely now to accept low-wage jobs. The US Chamber of Commerce insists that “[t]he worker shortage is real,” and that it has risen to the level of a “national economic emergency” that “poses an imminent threat to our fragile recovery and America’s great resurgence.” In the Chamber’s worldview, workers, not corporate employers who refuse to pay better, are the main obstacle to the US’s economic recovery.

Long-time labour organizer and senior scholar with the Institute for Policy Studies Bill Fletcher Jr. explained to me in an email interview that claims of a labour shortage are an exaggeration and that, actually, “we suffered a minor depression and not another great recession,” as a result of the coronavirus pandemic. In Fletcher’s view, “The so-called labour shortage needs to be understood as the result of tremendous employment reorganization, including the collapse of industries and companies.”

Furthermore, according to Fletcher, the purveyors of the “labour shortage” myth are not accounting for “the collapse of daycare and the impact on women and families, and a continued fear associated with the pandemic.”

He’s right. As one analyst put it, “The rotten seed of America’s disinvestment in child care has finally sprouted.” Such factors have received little attention by the purveyors of the labour shortage myth – perhaps because acknowledging real obstacles like care work requires thinking of workers as real human beings rather than cogs in a capitalist machine.

The Plight of the Wealthy

Indeed, economists and analysts have gotten used to presenting facts from the perspective of private employers and their lobbyists. The American public is expected to sympathize more with the plight of wealthy business owners who can’t find workers to fill their low-paid positions, than with unemployed workers who might be struggling to make ends meet.

Already, jobless benefits were slashed to appallingly low levels after the Republicans reduced a $600-a-week payment authorized by the CARES Act to a mere $300 a week, which works out to $7.50 an hour for full-time work. If companies cannot compete with this exceedingly paltry sum, their position is akin to customers claiming to a car salesperson that they have the right to buy a vehicle for a below-market-value sticker price. Again, capitalist logic is a worthwhile exercise to showcase the ludicrousness of how lawmakers and their corporate beneficiaries are responding to the state of the labour market.

Remarkably, although federal jobless benefits are funded through September 2021, more than two dozen Republican-run states are choosing to end them earlier. Not only will this impact the bottom line for millions of people struggling to make ends meet, but it will also undermine the stimulus impact that this federal aid has on the economies of states when jobless workers spend their federal dollars on necessities. Conservatives are essentially engaged in an ideological battle over government benefits, which, in their view, are always wrong unless they are going to the already privileged (remember the GOP’s 2017 tax cuts for corporations and the wealthy?).

The GOP has thumbed its nose at federal benefits for residents before. In order to underscore their ideological opposition to the Affordable Care Act, recall how Republican governors eschewed billions of federal dollars to fund Medicaid expansion. These conservative ideologues chose to let their own voters sufferthe consequences of turning down federal aid in service of their political opposition to Obamacare. And they’re doing the same thing now.

At the same time as headlines are screaming about a catastrophic worker shortage that could undermine the economy, stories abound of how American billionaires paid peanuts in income taxes according to newly released documents, even as their wealth multiplied to extraordinary levels. The obscenely wealthy are spending their mountains of cash on luxury goods and fulfilling childish fantasies of space travel. The juxtaposition of such a phenomenon alongside the conservative claim that jobless benefits are too generous is evidence that we are indeed in a “national economic emergency” – just not of the sort that the US Chamber of Commerce wants us to believe.

West Virginia’s Republican Governor Jim Justice justified the early ending of federal jobless benefits in his state by lecturing his residents on how “America is all about work. That’s what has made this great country.” Interestingly, Justice owns a resort that couldn’t find enough low-wage workers to fill jobs. Notwithstanding a clear conflict of interest in cutting jobless benefits, the Republican politician is now enjoying the fruits of his own political actions as his resort reports greater ease in filling positions with desperate workers whose lifeline he cut off.

When lawmakers earlier this year debated the Raise the Wage Act, which would have increased the federal minimum wage, Republicans wagged their fingers in warning, saying higher wages would put companies out of business. Opponents of that failed bill claimed that if forced to pay $15 an hour, employers would hire fewer people, close branches, or perhaps shut down altogether, which we were told would ultimately hurt workers.

Now, we are being told another story: that companies actually do need workers and won’t simply reduce jobs, close branches, or shut down and that the government, therefore, needs to stop competing with their ultra-low wages to save the economy. The claim that businesses would no longer be profitable if they are forced to increase wages is undermined by one multibillion-dollar fact: corporations are raking in record-high profitsand doling them out to shareholders and executives. They can indeed afford to offer greater pay, and when they do, it turns out there is no labour shortage.

American workers are at a critically important juncture at this moment. Corporate employers seem to be approaching a limit of how far they can push workers to accept poverty-level jobs. According to Fletcher, “This moment provides opportunities to raise wage demands, but it must be a moment where workers organize in order to sustain and pursue demands for improvements in their living and working conditions.”

This article was produced by Economy for All, a project of the Independent Media Institute.

Sonali Kolhatkar is the founder, host, and executive producer of “Rising Up With Sonali,” a television and radio show that airs on Free Speech TV and Pacifica stations.