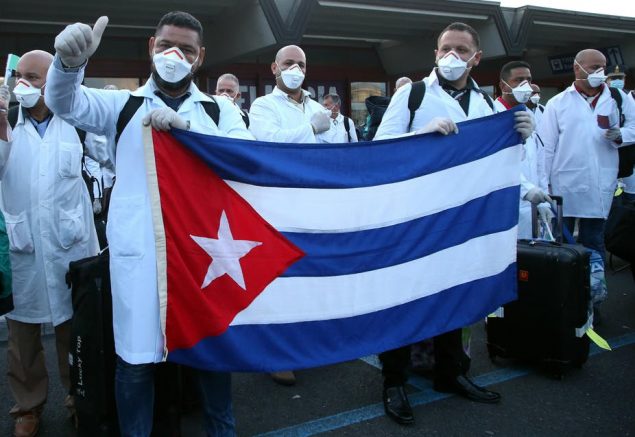 No country in the world will find it easy to confront the SARS-CoV-2 pandemic. But this moment calls for global cooperation and solidarity, and on that front, Cuba provides a lesson for us all.

Just weeks ago, in late February 2020, US Democratic Senator Bernie Sanders was vilified by the US establishment for acknowledging education and healthcare achievements in revolutionary Cuba.

Now, as the SARS-CoV-2 pandemic sweeps the globe, the island’s medical prowess is back in the spotlight, first because the Chinese National Health Commission listed the Cuban anti-viral drug Interferon alfa-2b among the treatments it is using for Covid-19 patients. Effective and and safe in the therapy of viral diseases including Hepatitis B and C, shingles, HIV-Aids and dengue, the Cuban anti-viral drug has shown some promise in China and the island has now received requests for the product from 45 countries.

Then, on 21 March a 53-strong Cuban medical brigade arrived in Lombardy, Italy, at that time the epicentre of the pandemic, to assist local healthcare authorities. While images spilled out over social media, little was said in mainstream outlets. The medics were members of Cuba’s Henry Reeve Contingent, which received a World Health Organisation (WHO) Public Health Prize in 2017 in recognition for providing free emergency medical aid. In addition to Italy, Cuba sent medical specialists to 37 of the 59 countries in which their healthcare workers were already operating, to treat Covid-19 cases.

Desperate to undermine the Cuban lesson in solidarity, on 24 March the US State Department tweeted that the Cuban motive was ‘to make up the money it lost when countries stopped participating in the abusive program.’ The object of its ire? Medical programmes under which Cuban personnel are contracted by host governments to provide healthcare that is free at the point of delivery to poor and underserved populations overseas. Reaping the benefits of socialist state investments in education and health, Cuban medical exports have emerged in the context of a punitive and extra-territorial 60-year US blockade that prevents Cuba pursuing normal international trade. The contracts provide revenue to the Cuban state, as well as higher salaries to participants. Under pressure from the Trump administration, Brazil, Ecuador and Bolivia have ended contracts, in order to eliminate a vital source of revenues for Cuba, leaving millions of people without healthcare. The strategy of sabotaging Cuban medical exports originates in the Bush-era ‘Medical Parole Programme’, which encouraged Cubans to abandon missions in return for US citizenship, and was not ended by Obama until his final days in office in January 2017.

This is not the first time that Cuba’s global health leadership has taken the world by surprise. In 2014, during the Ebola outbreak in West Africa when the WHO called for ‘compassionate doctors and nurses, who will know how to comfort patients despite the barriers of wearing PPE [personal protective equipment] and working under very demanding conditions’, Cuba was first to respond and sent the largest medical contingent. Jorge Pérez Ávila, then Director of Havana’s hospital of tropical diseases (IPK), told me that over 10,000 Cuban medical professionals volunteered for the mission. From these, a group of 256 were selected; all of whom had previously faced natural disasters and disease outbreaks in developing countries. They went to Guinea, Sierra Leone and Liberia, countries where Cuban medical missions already operated, and quickly reduced their patients’ morality rate from 50% to 20%, introducing an education programme to prevent the disease spreading.

The effort was praised by the Obama administration and on announcing rapprochement with Cuba on 17 December 2014, President Obama said, ‘American and Cuban health care workers should work side by side to stop the spread of this deadly disease.’ (1) Interviewed at that time in Liberia, Cuban doctor Leonardo Fernández shied away from the special praise for the high-profile mission, saying that the Cuban medics combating Ebola were no different from those in Brazilian jungles, those working alone in indigenous communities for months, or serving in African villages, in temperatures reaching 48 degrees. Indeed, the Cubans combatting Ebola were but a drop in the ocean compared to the 400,000 Cuban medical professionals who have worked overseas in 164 countries since 1960 and about whom politicians and the mainstream media have said almost nothing.

Still, since the first mission to earthquake-struck Chile in 1960, millions of lives have been saved and hundreds of millions of lives improved. By 2014, Cuban medical professionals had performed 1.2 billion consultations overseas, attended 2.2 million births and performed over 8 million surgeries (2). Some 76,000 Cuban medics had worked in 39 African countries since the early 1960s. Cuba had sustained over 20,000 healthcare workers in Venezuela for a decade, with thousands more in neighbouring countries.

Another aspect of Cuban medical internationalism has been to bring foreigners to Cuba, as patients or medical students. Under the ‘children of Chernobyl’ programme which ran from 1989 to 2013 some 22,000 children and 4,000 adults, victims of the Chernobyl nuclear disaster received free medical care, accommodation, food and therapy in Tarará, 10 miles outside Havana. Despite the severe economic crisis following the collapse of the Soviet bloc, the Cubans footed the bill — an astonishing expression of solidarity that has received almost no acknowledgement.

In late 1998 Cuban medics rushed to Central America after Hurricane Mitch killed 30,000 people and left 2.5 million homeless. Beyond the immediate devastation they were shocked to find whole communities lacking healthcare facilities and personnel. As a consequence, in November 1999 Fidel Castro inaugurated a new Latin American School of Medicine (ELAM) in Havana to provide free medical training to students from the region. The doctors graduating there, he said, would save more lives every year than those lost in the hurricane: ‘Twenty years can pass without a Mitch and a million people will silently die in Central America without anyone taking notice’ (3).

ELAM was soon enrolling students from around the world, including the United States. By 2019, 29,000 doctors from 105 countries had graduated. Half of them were young women, 75% the children of (agricultural) workers, representing 100 ethnic groups. In 2009, then-WHO director, Dr Chan, declared: ‘For once, if you are poor, female, or from an indigenous population, you have a distinct advantage [in admission]. This is an institutional ethic that makes this medical school unique.’ (4)

In late August 2005, Hurricane Katrina battered Louisiana, Mississippi and Alabama. Within hours, Cuba offered to send three field hospitals and medical personnel. By 4 September there were 1,586 Cuban volunteer medics ready to leave for the disaster zone. This was when the brigade was named the Henry Reeve Contingent, in honour of a US citizen who fought with Cuban independence forces against Spain (1868-1878). President Bush’s administration ignored the offer and omitted Cuba from a list of countries who had offered help.

There was no shortage of need, however, and the Henry Reeve Contingent was despatched first to Guatemala following Hurricane Stan in October 2005, and then days later to Pakistan-administered Kashmir following the earthquake that killed 80,000 people and left 3.3 million homeless. Over the next seven months 2,400 Cuban healthcare workers treated 1.7 million patients in 32 field hospitals they subsequently donated despite not having diplomatic relations with Pakistan. Within a decade 900 Pakistani medical students had graduated from ELAM.

In January 2010, a catastrophic earthquake hit Haiti, killing 230,000 people and leaving 15% of the population homeless. The Henry Reeve Contingent arrived within 24 hours, joining the 344 Cuban medical professionals already working in Haiti, alongside hundreds of Haitian physicians trained in Cuba. Cuba-Haiti medical cooperation had been initiated 11 years earlier following Hurricane Georges in 1998. By 1 April 2010, another 748 Cubans had arrived, along with 481 Haitian graduates from ELAM and 278 ELAM graduates from 28 other countries. To compound Haiti’s woes, in October 2010 an outbreak of cholera began, introduced via UN peacekeepers and spread due to the unsanitary conditions in temporary camps lacking safe drinking water or sewage facilities. The Cubans established cholera treatment centres and oral rehydration posts, set up tent-by-tent examinations and launched a public health campaign.

Why does Cuba do it? Cynical and superficial explanations focus on geopolitical and financial gains to Cuba: the government seeks allies and advantages in world forums — soft power; it forces healthcare workers into foreign-service contracts to earn the country export revenues; or Cuban professionals are simply motivated by the higher earnings they receive working overseas. More serious commentators observe that Cuban ‘medical diplomacy’ has been a cornerstone of foreign policy since the 1960s, before the realpolitik and economic imperatives of the post-Soviet era. Other researchers note that Cuban missions differ from most global health security responses, which are anchored in military and defence programmes and aim to protect domestic populations from external threats of disease. (5) They recognise that Cuban medical internationalism is rooted in a ‘principle of solidarity’ with the global population, but not the notions of responsibility, charity and altruism common in aid frameworks (6).

The revolution of 1959, which shaped the Cuban view of solidarity, combined the values of national independence hero José Martí with Marx’s analysis of capitalism. Taking up battle cries from both Martí (‘homeland is humanity’) and Marx (‘workers of the world unite, you have nothing to lose but your chains’), Cuba’s revolutionary leaders sought to promote a global struggle against diverse forms of underdevelopment, imperialism, colonialism and neo-colonialism. They view global poverty and poor health as a result of those exploitative structural conditions. The post-1959 public healthcare system was constructed on those values; free, universal state provision was endorsed as a human and constitutional right. Cuban medical internationalism is an extension of those principles overseas.

‘I believe that healthcare is a human right not a privilege,’ declared Bernie Sanders at a rally in Chicago on 7 March, just before the Covid-19 began to rip through a US population that has been systematically denied access to universal public healthcare in the name of liberty. It is a principle for which Cuba has also been vilified. No country in the world will find it easy to confront the SARS-CoV-2 pandemic. But this moment calls for global cooperation and solidarity, and on that front, Cuba provides a lesson for us all. We can start by demanding an end to US sanctions that stop Cuba from getting access to the resources it needs to fight this deadly pandemic, both for their own population and for the global beneficiaries of Cuban medical internationalism.

Julia Yaffe is a Lecturer in Economic and Social History at the University of Glasgow, specialising in Cuban and Latin American development. This article draws on materials in her new book We Are Cuba! How a Revolutionary People Have Survived in a Post-Soviet World (Yale University Press). She is also the author of Che Guevara: The Economics of Revolution (Palgrave 2009) and co-author with Gavin Brown of Youth Activism and Solidarity: the Non-Stop Picket against Apartheid (Routledge, 2017)