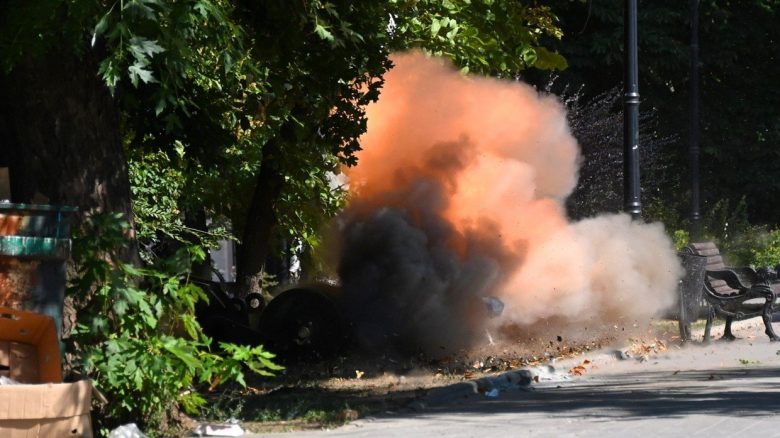 Mine clearance on the central street of Donetsk. Prohibited anti personnel high-explosive (PFM-1) “Petal” mines have been dropped on the city during night-time raids. © RIA

The use of PFM-1 explosives against civilians is prohibited by the Geneva Conventions—but this evidently isn’t stopping Ukraine. “It is becoming increasingly clear that the AFU, the Armed Forces of Ukraine, is losing its fight against Russian forces in an ever-swifter slide toward defeat. We detect a mounting desperation, although the reporting of mainstream correspondents is so poor, especially when considered next to Ms. Bartlett’s—indeed, so thoroughly dedicated to the propaganda project the regimes in Kiev and Washington share—that little about this war is clear.”
________________________

We take an unusual step as we publish the following piece by Eva Bartlett, the perspicacious Canadian correspondent whose practice it is to report from “the other side.” The Scrum does not customarily pick up pieces from other publications and reproduce them in its pages. We take this unusual step because it is an unusual time. We consider it halfway to a public service to offer our readers Ms. Bartlett’s sobering, eyewitness report from Donetsk City.

It is becoming increasingly clear that the AFU, the Armed Forces of Ukraine, is losing its fight against Russian forces in an ever-swifter slide toward defeat. We detect a mounting desperation, although the reporting of mainstream correspondents is so poor, especially when considered next to Ms. Bartlett’s—indeed, so thoroughly dedicated to the propaganda project the regimes in Kiev and Washington share—that little about this war is clear.

Amnesty International has just issued a report asserting that the AFU, as we have read numerous times over the months, uses civilian locations as cover. We are asked to believe that Russian forces shelled a detention camp wherein they hold captured Ukrainians. As we speak, we are asked to believe Russians are shelling a nuclear power plant their own troops appear to be guarding. The information war grows to unmanageable proportions.

Ms. Bartlett’s report seems to us not only to expose the shocking lengths to which the AFU has gone in Donetsk City as its position grows more desperate; she also casts a sharp beam of light on how numerous of the AFU’s other acts are reported—or not.

Eva Bartlett has distinguished herself in the course of reporting many stories, not least from Palestinian territories. She has done so again in the piece that follows, and we commend her for this work. The piece originally appeared in RT.

On Saturday 30 July, just after 9 pm, thunderous explosions rocked central Donetsk. Shortly after, there were announcements that air defense had shot down Ukrainian-fired missiles containing “Butterfly” (or “Petal”) mines. Given that over 300 of these explosives. are packed into each of the Ukrainian-fired rockets, central Donetsk could literally become a minefield if they successfully landed.

Social media and Telegram warnings urged residents to stay inside, to wait for Emergency Services to clear the streets and sidewalks – which they began doing during the night. But come daylight, untold numbers of these tiny devices still remained. More warnings were issued to stay at home – better to be late for work than lose a leg. Residents that absolutely have to go out are advised to keep their eyes down to watch where they step, avoid grassy areas, and walk extremely carefully. 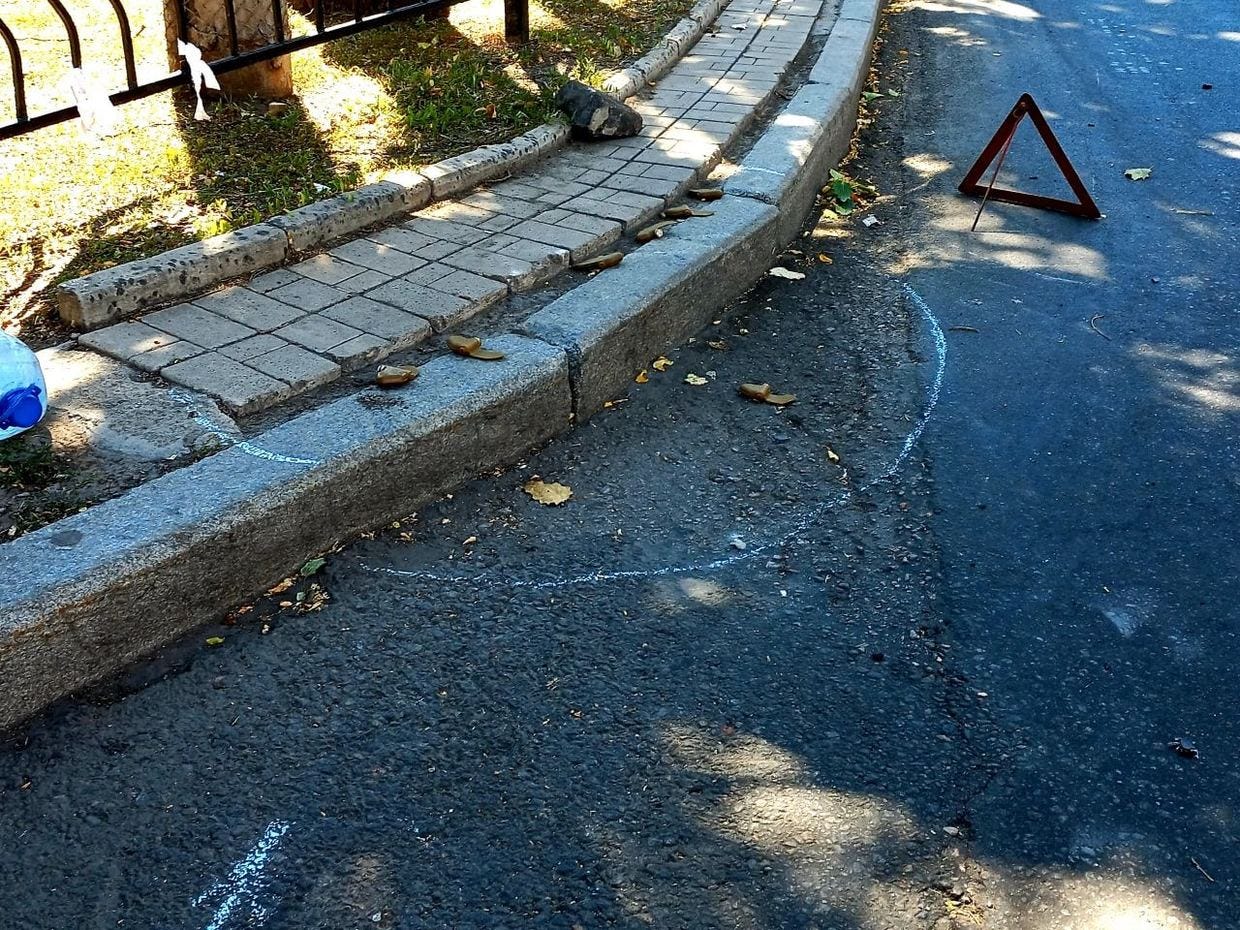 They look as innocent as autumn leaves. (© Eva Bartlett.)

While Ukraine has been using these mines on Donbass for many months, in recent days, they have intensely bombarded neighbourhoods with them. Initially targeted were the hard-hit districts of Kievskiy in the north, Kirovsky in the southwest, and Kuibyshevkiy in the west. But as of Saturday night, Ukraine hammered central Donetsk with them.

And now, walking in the city center is a nightmare, one I had to endure to document how widespread these mines are here: in central streets and walkways, near apartments, in parks…

Even with warning, these nefarious “petal”/”butterfly” mines dropped by Ukraine on Donetsk are hard to see & easy to miss.

Ukraine is committing war crimes against the civilians of the Donbass, and has been for 8+ years. pic.twitter.com/p5byG95GVG

Difficult to spot, easy to trigger

As it turns out, the ‘petals’ are not only widespread but often very difficult to spot – even if warning signs have been placed right next to them. Their small shape and dull color blends in with the surroundings and if you aren’t actively looking at the spot they’re in, you could easily miss them.

When walking, you learn to avoid any objects that could be covering a mine, and tread only on bare streets or sidewalks.

The first bunch of mines I saw were circled in chalk, a warning sign placed in front to keep cars from driving over them, and people from stepping on them. This was on a central Donetsk street, a residential area with shops and a park nearby. The entire area was littered with the ‘petals’. DPR sappers worked methodically, clearing area by area. But, given that hundreds of the mines were dropped all over the city, this is painstaking work.

Near some apartment blocks, numerous mines had been found and warning signs put out: “danger, mines,” it said by the tiny explosive circled with chalk or a tire or whatever was available to draw the eye to its presence. 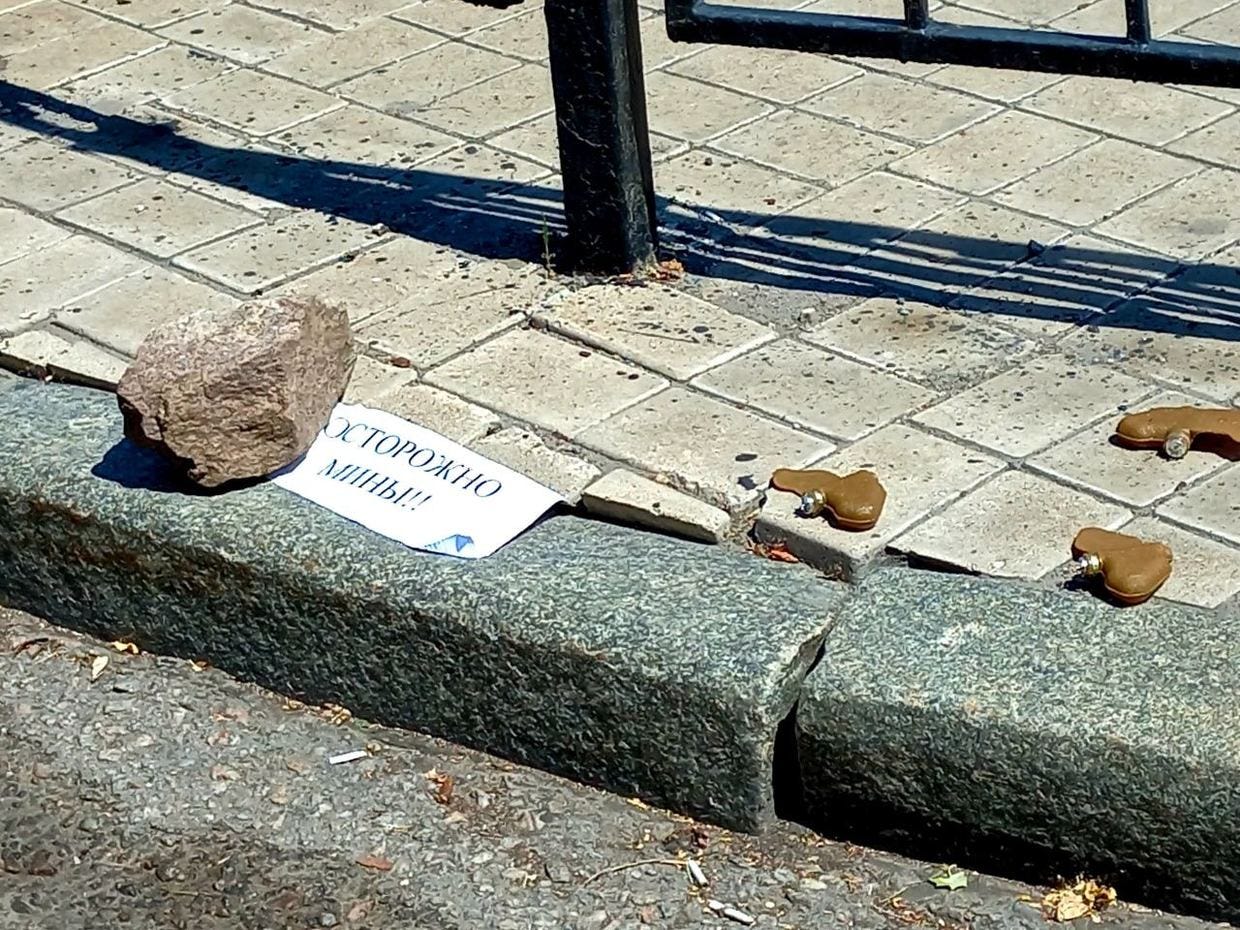 But, on many occasions, looking at the area designated as containing a mine, it took me a good while to actually see it. Now imagine if there were no signs at all … a bloodbath for civilians, and animals too, since it doesn’t take significant weight to set them off.

Around the size of an average lighter, the ‘petals’ are tiny but still very powerful.  A clip shared on Telegram illustrates this: A soldier chucks a tire at one of the mines, and the tire is flung high in the air from the blast. It doesn’t take a powerful imagination to estimate what would happen if a person stepped foot on one of them. The explosives are placed via remote delivery methods – meaning they can be spread by mortar, missile, or artillery, dropped by helicopters and planes. 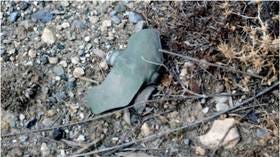 According to DPR Emergency services, Ukraine is using Hurricane MLRS-fired rockets to spread the mines. Each contains 12 cluster munitions, each cluster has 26 mines inside. So each bomb has 312. The cluster explodes in the air, disseminating them widely, scattering in different directions. Their butterfly-like design enables them to glide and land without exploding, usually. Then they lie in wait for someone with bad luck to step on them.

Some of these anti-personnel mines have a self-destruct timer. Others, including the ones Ukraine is firing, have a years-long shelf life. They do pretty much no damage to military vehicles, and as such their use in Donbass is insidious – deliberately targeting civilians, to leave them maimed.

On July 30, in a densely-inhabited working-class district of western Donetsk, in a field with garden plots for nearby apartment residents, I saw the same nefarious mines. Originally scattered, they had been collected and awaited destruction by DPR Emergency Services.

In the large courtyard of an apartment complex, I watched from a safe distance as Emergency Services timer-detonated eight mines they had found around the grounds. The day prior, they destroyed 26. Another 150 were located and destroyed using a radio-controlled minesweeper. But there remains much to be done to restore the streets and courtyards to safety.

Since the mines were scattered on Saturday evening, the DPR Representative Office at the JCCC has created an interactive map showing the areas most contaminated by the mines, giving residents a general warning of which areas to avoid while walking or driving in. While some cars have been lucky enough to only have a tire blown out, were the mine to detonate near the gas tank, the entire vehicle could explode.

Multiple civilians have been killed by the mines since they were scattered over Donetsk, and, even now, wounded civilians are still coming to the city’s hospitals. According to Vadim Onoprienko, the deputy director of a trauma surgery center, ten amputations have been performed over the last week – victims of Saturday’s mines and ones that had been dropped earlier, one of whom was an 83-year-old man.


All evidence points to Ukraine

Pro-Ukrainian commentators are, unsurprisingly, blaming Russia. Journalists claiming to care about civilians are perpetuating Ukrainian propaganda saying that Moscow’s forces are scattering the mines over civilian areas, nevermind the fact that these territories are controlled by Russia’s allies. Among them is the would-be war hero Malcolm Nance, who temporarily abandoned his job as a notoriously anti-Russian MSNBC analyst to apparently actually fight the Russians in Ukraine.

This is the kind of projection I have seen ad nauseam when reporting from Syria and dealing with the Western propaganda there. Ukrainian nationalists openly admit they do not see the Donbass people as human and encourage their murder. Ukraine has been killing and maiming civilians in the Donetsk and Lugansk People’s Republic for over eight years, including firing cluster munitions into the heart of cities, targeting hospitals, markets, schools and busy streets. Given all of this, scattering butterfly mines over Donetsk is hardly surprising. It’s criminal, but not surprising.

One argument used by pro-Ukrainian commentators is that Kiev has been destroying these mines under the Anti-Personnel Mine Ban Convention, which it signed in 1999. However, out of the six million such mines Ukraine initially declared in its possession, only two million have reportedly been destroyed as of 2018.

The EU and NATO were helping Ukraine destroy its petal-mine stockpiles as part of the EU-Ukraine agreements back in 2013 per Ottawa Convention. Look how well that went with Donbass suffering from these for 8 years. https://t.co/nepoVXaYnw https://t.co/9VbRifiwya pic.twitter.com/aVQdU0bWDn

Ukraine has good reason to believe it will not be held accountable for using them against civilians, given its Western backers’ and their allies’ penchant for using prohibited weapons on civilians without repercussions – including Agent Orange in Vietnam, depleted uranium in Iraq and Syria, and white phosphorous and dart bombs in Gaza.

The fact the Western media turns a blind eye is also a boon to Kiev.

Eva Bartlett is an independent Canadian journalist. She previously covered various conflict zones in the Middle East, notably in Syria and Palestine, where she lived for nearly four years. 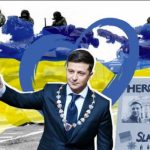 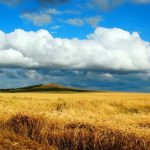 Dossier on Western pressures to open farmland in Ukraine for leasing and privatizationDossiers, Ukraine