The US ways of waging war, then and now 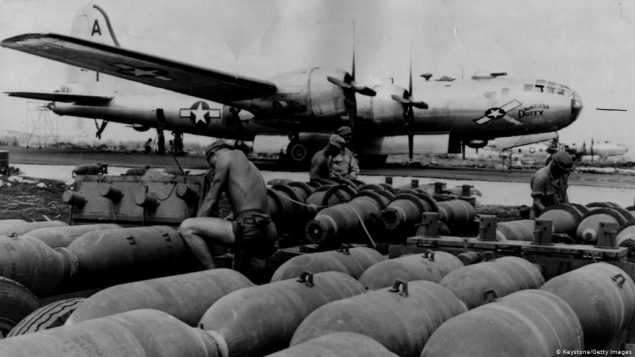 Monday, March 9, 2020, marks the 75th anniversary of the US firebombing of Tokyo, the single most destructive bombing raid in human history, and the single greatest terrorist attack ever undertaken.

Today the United States and its allies will carry out economic firebombing raids on North Korea, Cuba, Venezuela, Syria, and Iran, as they did yesterday and have done in the days and months and years and sometime decades before.

Seventy-five years ago Monday, the United States scorched, boiled and baked to death more people in Tokyo than went up in vapor at Hiroshima and Nagasaki, the single greatest terrorist attack in history. Three quarters of a century later, Washington wages war in less dramatic ways, relying on sanctions—economic firebombings—that are carried out silently by the Treasury Department and which kill civilians in even greater numbers than were incinerated in the infamous March 9-10, 1945 raid on Tokyo.

Monday, March 9, 2020, marks the 75th anniversary of the US firebombing of Tokyo, the single most destructive bombing raid in human history, and the single greatest terrorist attack ever undertaken.

Probably “more persons lost their lives by fire at Tokyo in a 6 hour period than at any time in the history of man,” concluded the official US Strategic Bombing Survey. The “largest number of victims were the most vulnerable: women, children and the elderly.” (Selden, p. 84)

“The full fury of firebombing and napalm was unleashed” when 334 US B-29 bombers swept “low over Tokyo from the Marianas. Their mission was to reduce [the Japanese capital] to ruble, kill its citizens, and instill terror in the survivors, with jellied gasoline and napalm that would create a sea of flames,” wrote Mark Selden, the editor of the online Asia-Pacific Journal: Japan Focus. (Selden, p. 83) 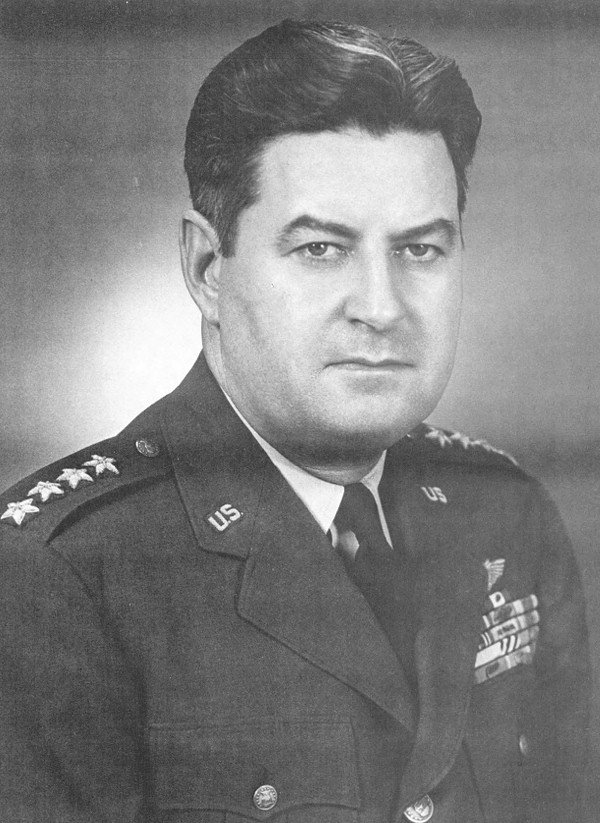 Curtis LeMay, the primary architect of US policies of putting enemy cities, and later villages and forests, to the torch, from Japan to Korea to Vietnam. Mastermind of the greatest single terrorist attack in human history.

The raid was planned by General Curtis LeMay, “the primary architect, a strategic innovator and most quotable spokesman for US policies of putting enemy cities, and later villages and forests, to the torch, from Japan to Korea to Vietnam.” (Selden, p. 82)

The single bombing raid killed an estimated 100,000 civilians, equal to the total number of US soldiers killed in every action of the entire Pacific War. (Selden, p. 90) One million were left homeless. (Selden, pp. 84-85)

“Whipped by fierce winds, flames generated by the bombs leaped across a fifteen-square-mile area of Tokyo, generating immense firestorms.” (Selden, p. 83) According to Sven Lindqvist, author of A History of Bombing, “People threw themselves into the canals and submerged themselves until just their mouths were above the surface. They suffocated by the thousands with the smoke and lack of oxygen. In other canals the water got so hot that people were boiled alive.” (Lindqvist, p. 107)

“No previous or subsequent conventional bombing raid came close to generating the toll in death and destruction of the great Tokyo raid of March 9-10.” (Selden, p. 85)

LeMay said he wanted Tokyo “burned down—wiped right off the map.” (Selden, p. 85) In his memoirs he wrote, “Nothing new about death, nothing new about deaths caused militarily. We scorched and boiled and baked to death more people in Tokyo that night of  March 9-10 than went up in vapor at Hiroshima and Nagasaki.” (Hasegawa, p. 117)

“In the summer of 1950, Japanese civilians at Yokota Air Base loaded the B-29s that had firebombed Tokyo five years earlier, for targets in North and South Korea.” (Young, p. 167) Having perfected the art of incinerating cities and cremating civilians, LeMay now applied what he had learned in Japan to Korea. He recalled that “over a period of three years or so … we burned down every town in North Korea and South Korea, too”. (Selden, p. 93) By 1953, there were only two modern buildings left standing in the capital of North Korea, Pyongyang. (Armstrong) 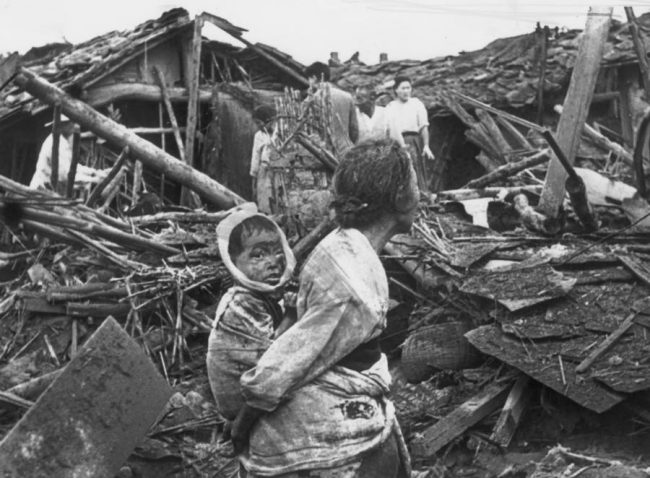 LeMay: We burned downed every town in North Korea and South Korea too.

US forces dropped 14,000 tons of napalm during World War II, principally on Japan. The amount was more than doubled, to 32,000 tons, for the war on Korea. The Vietnam War saw a more than ten-fold increase in the use of Dow Chemical’s incinerating jelly. (Lindqvist, p. 162)

The difference between cremating civilians in cities and cremating Jews in death camp ovens is too trivial to mention.

In 1959, the US historian Lewis Mumford wrote, “In principle, the extermination camps where the Nazis incinerated … helpless Jews were no different from the urban crematoria our air force improvised in its attack by napalm bombs on Tokyo.” (Hasegawa, p. 97)

Peter Englund, writing about the July 1943 US-British firebombing of Hamburg, which killed 35,000 German civilians, noted that “When the rescue teams made their way into Hamburg’s shelters, they were faced with scenes reminiscent of those encountered at the same time by Jews forced to clear the bodies of other Jews out of the gas chambers—‘intertwined piles of people, killed by fumes and pressed against the vents of the barricaded doors.’” (Lindqvist, p. 97)

Lindqvist recounts that Freeman Dyson, the recently deceased nuclear physicist, served as an operations analyst for the Royal Air Force Bomber Command “at the time of the firestorm in Hamburg. … ‘I sat in my office until the end, carefully calculating how to murder most economically another hundred thousand people.’ After the war he compared himself to the bureaucratic-murderers working in Eichmann’s death machine: ‘They sat in their office, writing memoranda and calculating how to murder people efficiently, just like me. The main difference was that they were sent to jail or hanged as war criminals, and I went free.’” (Lindqvist, p. 96) 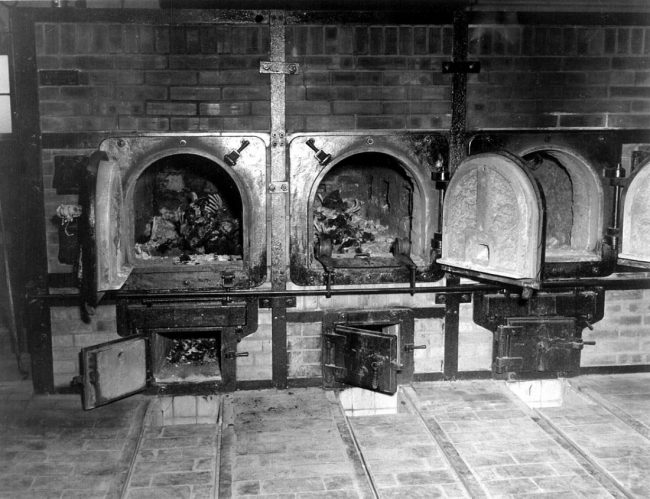 Mumford: In principle, the extermination camps where the Nazis incinerated … helpless Jews were no different from the urban crematoria our air force improvised in its attack by napalm bombs on Tokyo.

The arsonist, LeMay, was never sent to jail or hanged as a war criminal. The victors’ war crimes tribunals decided that since the German, US, British, and Japanese militaries all engaged in the indiscriminate bombing of civilians, terror bombing—the bombing of civilians with the express intention of inducing terror to sap their morale—was no longer a war crime. In a circular logic, if the United States did it, it was good…or a least not a crime.

For all its horrors, the March 9-10 air raid on Tokyo produced fewer fatalities than the Allied blockade of Germany during World War I, which killed more than 750,000 German civilians through disease and malnutrition (and which the Allies maintained, even after the Germans laid down their arms.) (Mueller and Mueller) UN sanctions on Iraq from 1990 to 2003 killed over 570,000 Iraqi children under the age of five, according to a UN agency (Crossette) —in only the first five years of a 13-year program of economic strangulation. And while 35,000 German civilians were cremated by US and British bombers at Hamburg in 1943, economists Mark Weisbrot and Jeffrey Sachs estimate that sanctions on Venezuela “have inflicted, and increasingly inflict, very serious harm to human life and health, including an estimated more than 40,000 deaths from 2017–2018.” (Weisbrot and Sachs)

The indiscriminate bombing of civilians meets the textbook definition of terrorism: the deliberate use of violence against civilians to achieve a political objective. Economic firebombing is no different. Its aim is to create enough hunger, disease, and death that the civilian population of a sanctioned country has no choice but to pressure its government to bring about the political change desired by the sanctioning power. US secretary of state Mike Pompeo’s ultimatum to Iran, that its “leadership has to make a decision that they want their people to eat,” illustrates the point. (Permanent Mission of the Islamic Republic of Iran)

In an article titled “It’s time we saw economic sanctions for what they really are—war crimes,” the veteran foreign affairs correspondent Patrick Cockburn wrote that economic firebombing is an “attraction for politicians”, because it “can be sold to the public, though of course not to people at the receiving end, as more humane than military action.” (Cockburn, 2018)

But economic firebombing can, and often does, produce more deaths than military intervention. The United States can silently kill 500,000 civilians through disease and malnutrition and arouse little opposition. But a firebombing raid on Pyongyang that killed many fewer civilians would be met by widespread moral indignation throughout the world. 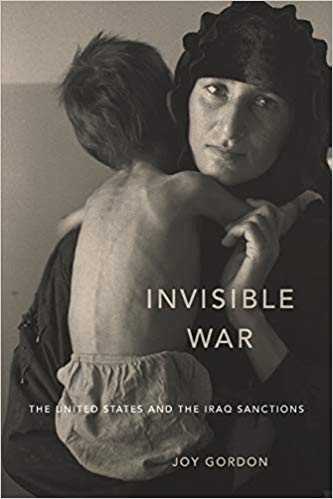 Sanctions, economic firebombings, are not a humane alternative to war. They are war, even if carried out invisibly.

From the perspective of the US government, it is now much more effective to rely on the US Treasury, the department which now does quietly what LeMay once did visibly, than to rely on LeMay’s successors at the Pentagon. “At the end of the day, the US Treasury is a more powerful instrument of foreign policy than the Pentagon for all its aircraft carriers and drones.” (Cockburn, 2019)

Today the United States and its allies will carry out economic firebombing raids on North Korea, Cuba, Venezuela, Syria, and Iran, as they did yesterday and have done in the days and months and years and sometime decades before. It’s the new way to wage war. And it can be much more deadly than the old way.

Stephen Gowans is the author of Israel, A Beachhead in the Middle East: From European Colony to US Power Projection Platform (2019); Patriots, Traitors, and Empires: The Story of Korea’s Fight for Freedom (2018); and Washington’s Long War on Syria (2017). All are published by Baraka Books, Montreal.

Cockburn, Patrick. “Europe doesn’t have the power to be much more than a spectator in the escalating US-Iran conflict,” The Independent, May 11, 2019.

Hasegawa, Tsuyoshi . “Where the atomic bombing of Hiroshima and Nagasaki justified?” in Yuki Tanaka and Marilyn B. Young, Eds., Bombing Civilians: A Twentieth-Century History, The New Press, 2009.

Permanent Mission of the Islamic Republic of Iran. Michael R. Pompeo, November 7, 2018, quoted in ”Iran letter to the UNSG and UNSC on Pompeo provocative statement,”

Permanent Mission of the Islamic Republic of Iran, November 30, 2018.

Selden, Mark. “A forgotten holocaust: US bombing strategy, the destruction of Japanese cities, and the American way of war from the Pacific War to Iraq,” in Yuki Tanaka and

Young, Marilyn B. “Bombing civilians from the twentieth to the twenty-first centuries,” in