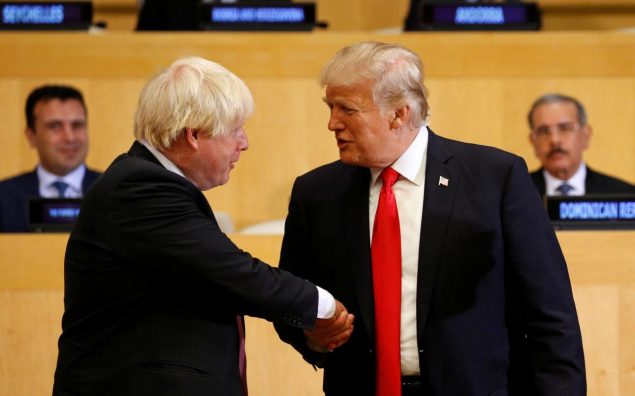 In the magical illusions of the smoke and mirrors ideology behind Brexit, we should be acutely aware of what a trade deal with America means…

In our article this week – The MAGA Agenda – it seems that among those on the radical right – the government, their acolytes and corporate donors – there is a widely held belief that a favourable trade deal can easily be negotiated with the United States. But this belief flies in the face of historical evidence as the US has proved on more than one occasion to be a ruthless and exploitative (so-called) partner where its own economic interests are involved. It is naive to think that America will be a cooperative and fair ally or partner in the common interest – it won’t. And being a sycophant of Trump’s America – with his MAGA agenda will prove to be the final nail in Britain’s coffin.

The radical right – members of the ERG, such as – Michael Gove, Iain Duncan-Smith, Priti Patel and Chris Grayling to name a tiny handful are driving Britain into the arms of a country that exploits everyone except the very few. American values are not British values and we should never dismiss the scale of damage that the USA inflicted upon Britain over the decades since the last World War.

For Boris Johnson to use inflammatory language to stoke up nationalism and adopt Churchillian euphemisms as a means to his own ends would make those who lost their lives to save this country from all sorts of evils turn in their graves. The fact is that the Americans exploited our position during the War and especially from 1945 for their own financial and economic gain. They were not just duplicitous, they were shameless about it and Britain should never trust them again – much as the Kurds in Northern Syria have just found out to their horror.

In the background, as the political warfare of Brexit rages on in the mainstream media, various Bill’s that relate to Brexit and future trade deals are being heard. For any politician to say that the latest Brexit deal continues to protect the rights of workers, protects the environment, food and medical supplies is simply lying, blindfolded or doesn’t understand the deceitful machinations of this government.

“Parliament needs to have a say on trade deals so that unaccountable government ministers aren’t able to use them to slash regulations, entrench privatisation and block climate action. This should be a simple, basic requirement in any democracy. MPs, Lords, business and civil society have all steadfastly been raising this for the past two years, and earlier this year Parliament introduced a clause in the old Trade Bill to guarantee that trade deals will be voted on. Yet Johnson’s government is so scared of having to answer to Parliament that it plans to have a new Trade Bill that conveniently leaves out all of these democratic provisions.

“We know that Johnson’s government wants to do a trade deal with the US in a hurry. Trump’s administration has already told us what it wants in deal, and it’s very worrying – chlorine chicken, higher prices for medicines, and an end to any attempt to rein in the power of Silicon Valley big tech firms like Google, Amazon and Facebook. A deal like that demonstrates the need for Parliament to be able to review what’s on the table and have a vote.”

The big problem with having made a career out of writing fantasies and falsities as Boris Johnson has done is that no-one believes the promises of habitual liars. And so it is with the one institution that stands heads and shoulders above all others in the UK – the NHS.

Last month, promises made by Boris Johnson that the NHS is “off the table” in negotiations over a post-Brexit trade deal with the US simply cannot be relied upon. As Nick Dearden says:

“Johnson’s promise to protect the NHS should be taken with a very large pinch of salt, because the threat to our health system will be written across a US-UK trade deal, from the new powers it gives big pharmaceutical corporations to charge higher prices for medicines, to restrictions on preventing Big Tech companies from mining the NHS database.

This will go well beyond a US trade deal, however. Johnson’s government is talking to countries across the world who will want to use Brexit to insist on even more damaging environmental policies from the UK. Only last week Malaysia said that reducing regulations on palm oil production would be the price of a post -Brexit free trade deal.”

The other point to remember is this – why would any country rely on America in any deal to play fair and by the rules. They don’t even in their own country. American’s don’t trust the regulatory agencies to do their work properly or professionally when most of them are drenched in corruption or bribery scandals. Take for instance the USDA’s National Organic (food) Program. Described by national media organisations as a ‘feckless agency‘ involving its complicity in what might be the biggest consumer scam in decades: the sale of phoney organic food. It’s a scam that’s been going on for years and years and yet the federal government looks the other way. Millions of American consumers have been — and are still being — duped, buying pricier “organic” products that are imported into the country without the correct licences or country of origin certificates, repackaged and sold on – making huge profits along the way. Food products can arrive from places like China, South America or Africa, be covered in pesticides and ridden with deadly heavy metals and sold as healthy organic produce simply by repackaging with misleading attractive labels.

Corporations all across America consider being fined billions of dollars for fraud and corruption as the cost of doing business. People and consumers are the last consideration. And healthcare companies are some of the worst in America. As the Forbes said at the end of last year – in an article entitled ‘Shame, Scandal Plague Healthcare Providers In 2018′ –  “Unfortunately, the problems (of corruption) are endemic and deeply embedded in medical culture.”

Nowhere are these ill-effects more apparent than in cancer care. A recent report titled “Unintended Consequences of Expensive Cancer Therapeutics” found that the last 71 chemotherapy agents to receive FDA approval extend life by an average of only 2.1 months—time often spent in pain, isolated from friends and family – purely for the purposes of making bigger profits. It’s extortion practices even extend to the heartbreak of a family member dying before your eyes.

In America today – two-thirds (66.5%) of all bankruptcies are caused by not having the right health insurance. Last year, 530,000 families lost everything – homes, savings, assets built for retirement – to save a family member from illness – only for everyone else in the family to be pauperised. A recent study found that only 40 per cent of Americans have enough saved to cover a $1,000 emergency expense – and medical care comes with co-pay (percentage of contribution) costs that can roll into thousands depending on the cover.

In 2019, the average price of health insurance rose above $20,000 for families that obtain their coverage through work. They pay just over $6.000 assuming that someone in the family has a good job as they employer stumps up $14,000 per employee – per year. The Keiser Foundation report into American healthcare costs said:

“These numbers are grotesque. Insuring a single family for a year costs almost as much as a Honda Civic. This fact should be a subject of daily outrage, and it probably would be if more workers realized just how much of their compensation is devoured by the cost of health care. After all, every dollar a company pays to Aetna or Cigna is a dollar it might otherwise be able spend on salaries and wages.”

Boris Johnson knows this. He was born in America. From faking his ancestral history to bendy bananas, eurocoffins, and the banning of prawn cocktail crisps. Boris Johnson has been fired more than once for lying and made to apologise for outrageous allegations such as he did about the Hillsborough disaster.  From his philandering and now accusations of corruption with a pole dancing ‘entrepreneur’, Boris Johnson’s honesty and integrity in any area of life mean nothing. He will be as happy selling Britain down a river without a paddle for a bit of personal glory and people will believe him.

Was it Noel Coward who once said – “It’s discouraging to think how many people are shocked by honesty and how few by deceit.”

This trade deal cannot be trusted to be in the best interests of Britain if left to the whims and fantasies of this government.