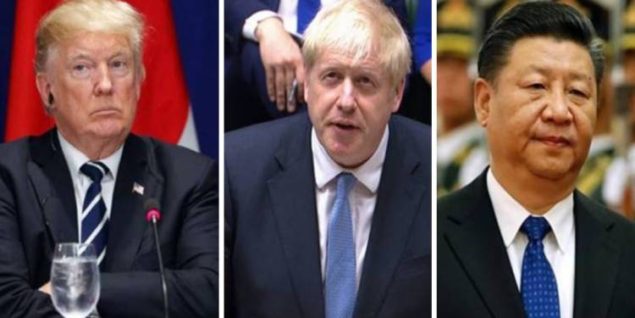 In Monday’s Commons debate on scrapping the Hong Kong extradition treaty, Conservative MP and former Foreign Office Minister Tobias Ellwood said the following, ” For decades now, we have turned a blind eye to China’s democratic deficit and human rights violations, in the hope that it would mature into a global responsible citizen. That clearly hasn’t happened. Is this now the turning point where we drop the pretence that China shares our values?”

“I tremble for my country, when I reflect that God is just.” Thomas Jefferson.

In Monday’s Commons debate on scrapping the Hong Kong extradition treaty, Conservative MP and former Foreign Office Minister Tobias Ellwood said the following, ” For decades now, we have turned a blind eye to China’s democratic deficit and human rights violations, in the hope that it would mature into a global responsible citizen. That clearly hasn’t happened. Is this now the turning point where we drop the pretence that China shares our values?”

The accusations made against China are grim ones which they strongly deny, but coming from the countries that brought you – just in recent years – waterboarding and other “enhanced interrogation” techniques, Abu Ghraib, Guantanamo Bay, Special Rendition, the Fallujah Free Fire Zone and extra judicial drone assassinations (with 601 casualties in Yemen alone between 2011 and 2017) (1) you have to wonder what human rights values “we” have been modelling; and how China has supposedly diverged from them, by allegedly doing what we have done in plain sight for so many years.

It has to be said that it is a strange sort of “genocide” in which the ethnic group supposedly being targeted is rapidly growing in numbers and proportion of the population, and an odd kind of “cultural/religious suppression” in which the number of Mosques has increased by a factor of ten in the last thirty years. Just over 2000 Mosques in Xinjiang in 1989, over 24 000 now.

Does Mr Ellwood mean that a tough line with street protests to “dominate the streets or you’ll look like a bunch of jerks”, is way out of line with anything a Western power would contemplate or carry out? (2) If so, he hasn’t been paying much attention lately or, indeed, ever.

Does he mean that mass incarceration is unacceptable? This would be odd, because the USA currently locks up 2.1 million people, 25% of the total global prison population; way above any other country and far more per head than China does; while England and Wales, with 145 prisoners per hundred thousand people, have the highest per capita prison population in Western Europe and Scotland is not far below; all well above China’s 118 per hundred thousand (3). 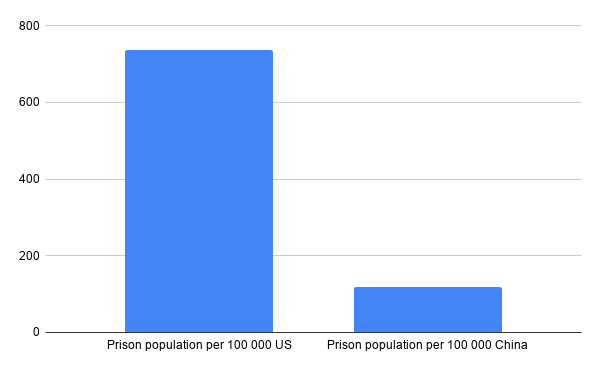 Land of the free?

Can he mean the exploitation of free, or ludicrously cheap, prison labour to produce goods for well known companies? Again, this would be odd because that’s what US prisons do. McDonalds, Wendys, Wal-Mart, Starbucks, Verizon, Sprint, Victoria’s Secret, JC Penney, KMart, American Airlines and Avis are documented beneficiaries. (4)

He can’t mean interning people without trial who are in rebellion against the state, because that’s what the UK did in Kenya, Malaya, Cyprus and the North of Ireland and the US did with its “strategic hamlets” programme in Vietnam. So, that would be completely in line with “our values”, wouldn’t it?

Nor can he mean that sterilising ethnic minorities is out of line with “our values” , because that’s what the US did throughout the twentieth century at home- 25-50% of native American women in the 1970s, a third of the female population of Puerto Rico between 1938 and 1970, countless Black women given unnecessary and involuntary hysterectomies (Mississippi appendectomies), 150 prisoners in California as recently as 2010 – and to many more abroad throughout Latin America and beyond, including up to 200 000 indigenous women in Peru in the 1990s. (5)

He can’t mean disregarding local democratic rights and imposing an unwanted regime from the outside, because that’s what the United States has done 20 times by invasion and another 56 times by interventions short of that since 1949. Some of these have been very bloody. Two million Vietnamese killed, half a million Indonesian Leftists massacred in 1965, thousands and thousands throughout Latin America for decades. Whatever you think of China, it would take them a long time to catch up with a record like that.

Nor can he mean communities feeling unsafe at the hands of the police force that is meant to “protect and serve” them. The chance of being shot dead in the streets by the police was approximately 2000 times greater in the US than in China in 2019. (6) 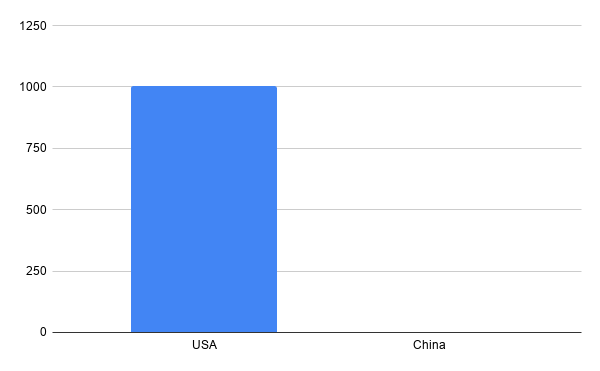 Perhaps he means having a threatening military posture to intimidate other countries? But here again the US posture is far more threatening, both in terms of military expenditure, on which the US spends $4 for every $1 spent by China… 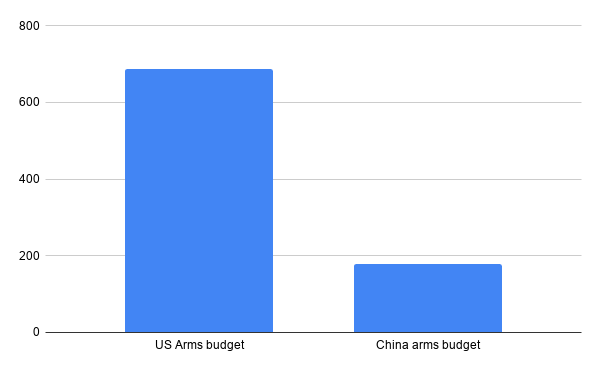 Who is threatening who here exactly?

…and even more starkly in terms of overseas military bases, of which the USA has 800 and China has 3. 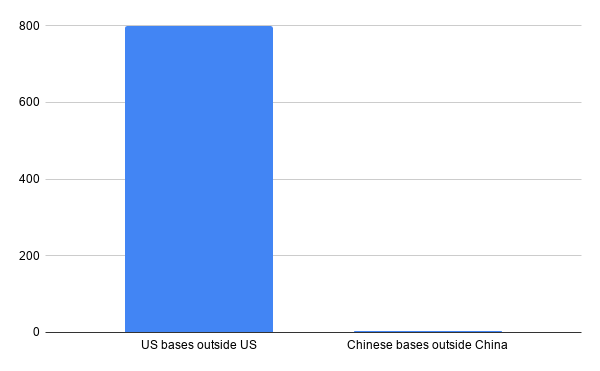 Even the UK has 16, more than five times as many as China. If you look hard, you’ll just about see them.

Who is “A Global Responsible citizen”…?

A responsible global citizen faces up to the fundamental challenges facing humanity and seeks co-operation to solve them. The gravest threat to all of us is climate breakdown. China is committed to the Paris Agreement, has met its targets early and raised them. The United States under Trump is walking out of the Agreement on the grounds that “we believe that no country should have to sacrifice economic prosperity or energy security in pursuit of environmental sustainability,” Wells Griffith, Trump’s envoy to the Katowice COP 2018. (7) If every country adopted the US approach, we’d have no hope of avoiding the melt down of our civilisation. Its not mature and its not responsible. The unilateral, selfish action they are taking threatens all of us with catastrophe. Mr Ellwood does not appear to have noticed, or, if he has, does not think this to be of any significance.

In the immediate global crisis caused by COVID19, the records of China, the UK and US certainly show a divergence in values. China put public safety first and, despite an initial fumble by local officials, managed to crush the virus and keep domestic deaths down to just over 4600. In the UK and US, by contrast, commercial considerations and half baked libertarianism has led so far to almost twice as many deaths in the US as there were cases in China with the virus well out of control and infections rising exponentially again. The most conservative figure for UK deaths is ten times the Chinese total (and therefore 200 times the rate per capita). A little humility about this on the part of the people responsible for it might not go amiss.

The political effect of this in China has been to boost the standing and legitimacy and standing of Xi Jinping and the Communist Party. (8) This was always far stronger than Western opinion has ever been able to comprehend, but looking out from a society that has been kept largely safe – as well as having risen from extreme poverty in living memory – the mounting casualties and sheer chaos of the “West” shocks and horrifies popular opinion. The first duty of government, after all, is to keep its people safe. Job done there. Not here.

Economically, the Chinese economy is now recovering. It was already larger in purchasing parity terms than that of the United States before COVID hit. The seeming insanity of the efforts by the Trump administration to reopen their economy while cases are rising is explained by their fear of falling further behind. The IMF projects that 51% of world growth in the next two years will be in China. The US, by contrast, will account for just 3.3%.

As the virus spreads exponentially again, pushing the US proportion of global deaths back up to 15%, from a low of 9% last month, employment and economic activity have gone through the fastest collapse in history. This stokes the US political crisis and fuels the Black Lives Matter uprising. This titanic crisis of health, survival and livelihoods – and the Trump adminstration’s callous indifference, bluster, denial and authoritarian incompetence- has revealed to a popular majority that the enemy is at home and in high places.

The controlled response to the virus in China has saved the world many infections and deaths. That of the USA continues to threaten any other country that trades or deals with it.

China has put a moratorium on debt repayments from 66 struggling developing countries. The USA has imposed sanctions on Iran and Venezuela. (9)

China has pledged that any vaccine developed in the country will be a common good for the whole world. President Trump has applied “America First” even to this, cornering the market in available treatments, gazumping other countries supplies, while, with the UK, insisting on patent rights (which puts pharma profits above cheapness and availability). Clearly a divergence in “values” there.

The increasingly delirious accusations being made against China – which in the media are presented as a labyrinth of mirrors, with each story of each allegation being reported as though they were evidence of it – reflect the desperation of a US ruling class who can feel the earth falling away under their feet. The majority of the world, as reflected in UN votes, do not believe this US narrative. Twice as many countries voted with China on both Xinjiang and Hong Kong as voted for “Western” resolutions; which were supported only by wealthy close US allies, the imperial bubble that likes to think of itself as “the global community.”

The dominant current in the UK Labour Movement, the Labour Right, historically gives the US complete credence. Even devotees of an “ethical foreign policy” are usually highly selective about where they look to demonstrate their ethics. I hope that what is written above is enough to convince that this position doesn’t have a leg to stand on – morally or in any other respect. For the right, this is a matter of realpolitik, so whats true doesn’t really come into it. But there are also currents that identify themselves as “far left” and take a militant line on domestic politics, but never saw a US intervention they didn’t like, nor a State Department attack line they are unwilling to shout through a social media megaphone. For all the reasons above, a pro Washington line is the most reactionary position that can be taken and, in current circumstances, will lead those that espouse it down a road towards giving the USA the social support it needs to threaten a war that could kill us all.

Others, more on the left, will have no illusions about the messenger, but will accept part or all of the message; and will consider articles like this too uncritical. The bottom line here is, that whatever critical view is held about China, or actions it is alleged to have taken, these currents do not line up with Washington and are not willing to allow themselves to be used in giving support to the war drive that is already taking place in economic sanctions and aircraft carrier deployments.

It is stopping these that is the imperative. Arguments about other matters will only be able to continue if the gathering momentum towards war and environmental collapse are stopped and the precarious structures of global co-operation are strengthened.

9. Petition against these sanctions here. https://docs.google.com/forms/u/0/d/e/1FAIpQLSeX3BVo8lQy2bDBmjcbJkphiP_HI9tnrTnI_DZlKo8DTZFJcw/formResponse