The unelectable liberal opposition in Russia

Recently, I wrote about the sorry state of the Russian liberal democratic opposition and Vladimir Putin’s strong showing in public ratings. Here is another data set, this time reflecting this week’s data:

Q: Imagine that next Sunday there will be presidential election in Russia. Which politicians would you give your vote to? President Putin’s share of the vote: (Source: http://fom.ru/Politika/) 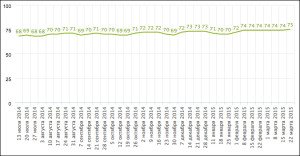 Here’s the link to longer-dated series, and a snapshot from the same (I omit spoiled votes and those who are not planning to vote): 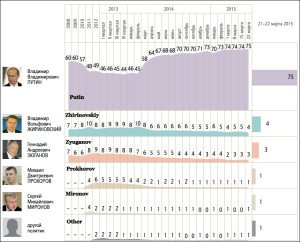 I have trouble spotting a viable liberal opposition that can be supported by a democratic regime change. But maybe I am just not seeing something.

Like it or not, but these are the numbers we have.

Constantin Gurdgiev is an economist, writer and publisher of the True Economics blog. He lives in Dublin.