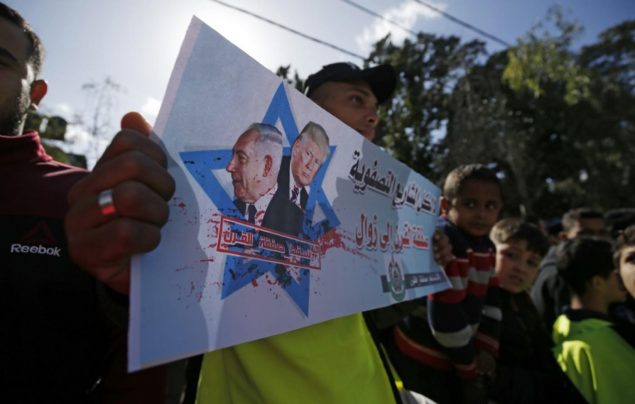 The Trump “Vision for Peace” will never be implemented – and not because the Palestinians reject it. Prime Minister Benjamin Netanyahu’s enthusiastic public embrace of the plan belies the fact that the Israeli right detest it too.

The headlines are that, with US blessing, Israel’s dream is about to be realised: it will be able to annex its dozens of illegal settlements in the West Bank and the vast agricultural basin of the Jordan Valley. In return, the Palestinians can have a state on 15 per cent of their homeland.

But that is not the real aim of this obviously one-sided “peace” plan. Rather, it is intended as the prelude to something far worse for the Palestinians: the final eradication of the last traces of their political project for national liberation.

US President Donald Trump’s plan is neither a blueprint for peace nor a decree from the heart of the US empire. Rather it is a decoy, an enormous red herring created in Tel Aviv and then marketed by Trump’s son-in-law, Jared Kushner, the glorified used-car salesman who currently occupies the White House.

Trump may think his vision could lead to a “realistic” two-state solution. Even many critics assume it envisions the establishment of a highly circumscribed, enfeebled Palestinian state. But for Israeli leaders it serves another purpose entirely: it provides diplomatic cover while they put the finishing touches to their version of a one-state solution inside Greater Israel.

Netanyhau has crafted a “deal of the century” designed to fail from the outset – and managed it through deeply partisan White House intermediaries like David Friedman, the US ambassador to Israel, and Kushner. For all of them, its purpose is to provide a fresh alibi for Israel and Washington to continue disappearing the Palestinians more than two decades after the illusions of the earlier Oslo Accords “peace” process can no longer be sustained.

That this is intended as a grand deception should not surprise us. The current plan follows a tried and tested tradition of US-dominated “peacemaking” that has utterly failed to bring peace but has succeeded triumphantly in smothering and erasing historic Palestine, gradually transforming it into Greater Israel.

Trump’s deal is, in fact, the third major framework – after the 1947 United Nations Partition Plan and the Oslo accords initiated in 1993 – supposedly offering territorial partition between Israelis and Palestinians. The lesson of each has been that Israel and the US have returned after each inevitable and intended failure to offer the Palestinians even less of their homeland.

On each occasion, Israel (and before its creation, the Zionist leadership) has signed up to these peacemaking initiatives in bad faith, forcing Palestinians, as the weaker party, to reject them. And each time, that rejection has been weaponised by Israel – used as a pretext to steal more territory.

This plan is no different from the others. It is simply the latest iteration of a pattern of settler-colonial expansion sponsored by Western powers. But this time, if Israel succeeds, there will be nothing left of Palestine even to pretend to negotiate over.

The idea of division first took substantive form with the United Nations Partition Plan of late 1947. It proposed creating two states: a Jewish one on 55 percent of Palestine would supposedly serve as compensation for Europe’s recent genocide; and an Arab one, on the remaining 45 percent, would be for the native Palestinian population.

David Ben-Gurion, Israel’s founding father, knew that the Palestinians were bound to reject a plan premised on their dispossession. That was the very reason he signed on. He hated the limitations imposed by the UN on his emerging Jewish state – he wanted all of Palestine – but was only too aware that Palestinians hated the partition proposal even more than he did. He knew his good faith would never be put to the test.

Under cover of the ensuing, year-long war, Ben-Gurion sent his troops way beyond the partition lines, seizing 78 percent of historic Palestine and transforming the area into a Jewish state. In 1967, his successors would grab the rest, as part of a surprise strike against Egypt and other Arab states. And so, the 53-year-long occupation was born.

Just as now with the Trump plan, the Oslo process of the 1990s was not rooted in the idea of establishing a sovereign Palestinian state – only of pretending to offer one. In fact, statehood wasn’t mentioned in the Oslo accords, only implied by a series of intended Israeli withdrawalsfrom the occupied territories over a five-year period that Israel reneged on.

Instead, Oslo was seen by the Israeli side, led then by Yitzhak Rabin and Shimon Peres, chiefly in terms of an “economic peace”. The new rallying cry of “separation” was intended to transform fragments of the occupied territories into free-trade zones to exploit a captive Palestinian labour force, and then to normalise relations with the Arab world.

The Trump plan recognises that Oslo is now more an obstacle than a vehicle for further Palestinian dispossession. Israel has absolute control of East Jerusalem, the planned capital of a Palestinian state. The army and settlers have cemented Israeli rule over 62 percent of the West Bank – territory Oslo declared as Area C – that includes its best agricultural land, water sources and mineral wealth. Gaza, isolated from the rest of the occupied territories, is besieged.

The only thing left for Israel to do now is formalise that control and ensure it is irreversible. That requires making permanent the current apartheid system in the West Bank, which enforces one set of laws for Jewish settlers and another for Palestinians.

Trump’s “Vision for Peace” is needed only because Oslo has outlived its usefulness. The Trump plan radically overhauls the Oslo process formula: instead of a supposed sharing of obligations – “land in return for peace” – those obligations are now imposed exclusively on the Palestinian side.

Under Oslo, Israel was supposed to withdraw from the occupied territories as a precondition for achieving Palestinian statehood and an end to hostilities.

In reality, Israel did the exact opposite.

Under the Trump plan, Israel gets the land it wants immediately – by annexing its illegal settlements and the Jordan Valley – and it gets more land later, unless Palestinians agree to a long list of impossible preconditions.

Even then, Palestinians would only be entitled to a demilitarised, non-sovereign state on less than 15 percent of historic Palestine, amounting to a patchwork of enclaves connected by a warren of tunnels and bridges, surrounded by armed, fortress-like Israeli communities.

But even this vision of pseudo-Palestinian statehood will never come to fruition – something Netanyahu has made sure of. The Trump plan is a catalogue of the most unacceptable, humiliating concessions that could ever be demanded of the Palestinian people.

It offers them a state that would be unlike any state ever envisaged. Not only would it have no army, but it would have to permanently accommodate a foreign army, the Israeli one. Palestine would have no control over its borders, and therefore its foreign relations and trade. It would be deprived of key resources, such as its offshore waters, which include large deposits of natural gas; its airspace; and its electromagnetic spectrum.

It would be deprived of its most fertile land, its quarries, its water sources, and access to the Dead Sea and its related mineral and cosmetics industries. As a result, the Palestinian economy would continue to be entirely aid dependent. Proposed industrial zones in the Negev, accessible only through Israeli territory, could be closed off by Israel at a whim. 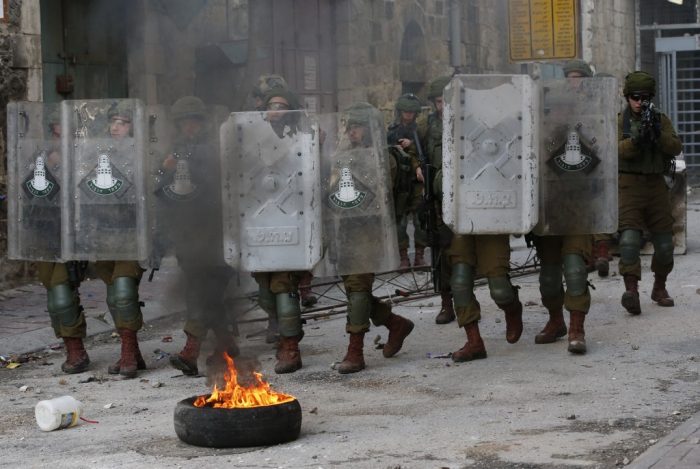 Israeli troops use shields as they try to disperse Palestinian protesters (not seen) throwing stones at a checkpoint in the centre of Hebron in the Israeli-occupied West Bank on January 30, 2020 (AFP)

East Jerusalem, including its holy sites and tourism industry, would be sealed off from the Palestinian state, which would have its capital instead outside the city, in Abu Dis. That village would be renamed Al-Quds, the Holy, although the deception would satisfy outsiders only, not Palestinians.

The US appears ready to let Israel forcibly divide the site so that Jewish extremists, who want to blow up the mosque and replace it with a temple, can pray there – in a repetition of what happened earlier to the Ibrahimi Mosque in Hebron.

There would be no Palestinian right of return. Abbas would need to recognise Israel as a Jewish state, retrospectively sanctioning Palestinians’ dispossession and colonisation.

The Trump plan demands that the PA strip the families of political prisoners and martyrs killed by the Israeli army – the Palestinian equivalents of Nelson Mandela and Steve Biko – of their welfare payments.

In an interview with CNN this week, Kushner made clear quite how intentionally contradictory his demands of Palestinians are. Before it can be recognised as a state, the Palestinian Authority is expected to enforce the disarmament of the Palestinian factions, including its militant rival Hamas.

But it will have to do so while behaving like some kind of idealised Switzerland, according to Kushner, who insists that it uphold the most stringent democratic standards and absolute respect for human rights.

He indicated that the PA would fail such tests. It was, he said, a “police state” and “not exactly a thriving democracy”.

The Trump plan’s proposed democratic Palestine, it should be noted, would not be eligible to partake of international justice. Should Israel commit atrocities against Palestinians, the PA would have to forgo any appeals to the International Criminal Court in the Hague, which adjudicates on war crimes.

And in a final proof of its determination to ensure Palestinians reject the deal, the Trump administration has dusted off a forcible transfer plan long promoted by the former far-right defence minister, Avigdor Lieberman. Israel could then redraw the borders to strip potentially hundreds of thousands of Palestinians living in Israel of their citizenship. Such a move would constitute a war crime.

The Trump plan’s secret weapon is hidden in the “four-year clause”, as Kushner’s CNN interview makes explicit. He said: “If they [the PA] don’t think that they can uphold these standards, then I don’t think we can get Israel to take the risk to recognise them as a state, to allow them to take control of themselves, because the only thing more dangerous than what we have now is a failed state.”

Israel and the US know that not only will Abbas or his successor never consent to the White House’s nightmare scenario, but that they could never meet these preconditions even if they wished to. But if the Palestinians don’t concede everything demanded of them within four years, Israel will be free to start grabbing and annexing yet more Palestinian land.

In other words, if Palestinians refuse to disappear themselves in line with the Trump vision, it will be assumed that they consent to Israel’s permanent apartheid rule. Palestinians will have forfeited their right to any kind of state on their historic homeland, ever.

That is the real Trump vision, designed in Israel and soon to be rolled out in Palestine. 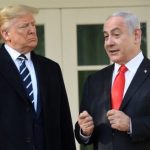 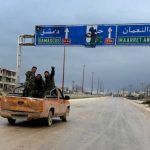