The Trinity deal: the most significant UK newspaper merger in decades 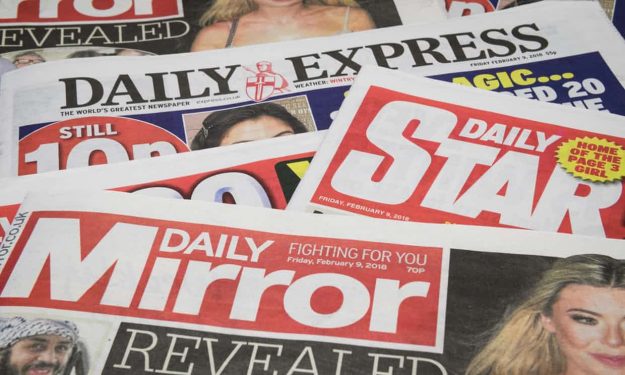 Three articles on the ‘Trinity Deal’ shakeup of the UK newspaper publishing industry illustrate an important trend driving the push for internet censorship: mass media outlets are losing their readers.

Does the ownership of a newspaper affect what it says? You judge.

Why Trinity Mirror bought the Express and Star titles

By Mark Sweney, originally published on 9 Feb, 2018 in the Guardian

So who has bought what?

Trinity Mirror owns the Daily Mirror, Sunday Mirror and Sunday People national newspapers, the Sunday Mail and Daily Record in Scotland, and more than 100 regional titles including the Manchester Evening News and Birmingham Post. It has now forked out £200m in a deal for Richard Desmond’s publishing assets, which include the Daily Express, Sunday Express, Daily Star, Daily Star Sunday, the magazines OK!, New! and Star, plus the Irish Daily Star.

Why has this deal been done?

Digital-savvy readers are turning away from printed newspapers, which still provide most revenues for publishers from paper sales and advertising. The shift to digital has proved to be exceptionally difficult as Facebook and Google hoover up the vast majority of online advertising revenue.

Trinity Mirror wants to grow bigger to give it the scale to drive revenues from traditional newspaper operations, and to better fight for digital advertising against the Silicon Valley rivals.

“The background to this deal is a recognition of the need for consolidation in our industry and the vision for creating and sustaining a stronger newspaper group,” Desmond told staff in an email.

Will Labour-backing Mirror titles meddle with the Brexit-backing Express stable?

No. At least not according to Simon Fox, the chief executive of Trinity Mirror, who said: “The Mirror is not going to go rightwing and the Express is not going to go leftwing. They will absolutely all have editorial independence”.

Trinity Mirror has said the takeover will lead to £20m in annual savings, which means job cuts and the pooling of resources. Fox said that while certain areas will be sacrosanct, such as political writers, others such as sport will be subject to merger. One pool of writers will provide content for all five national newspapers.

So what happens next?

The competition regulator will scrutinise a deal of this size, which will give the enlarged Trinity Mirror group control of 24% of UK national newspaper sales. It may look to implement an initial enforcement order (IEO) to stop the two publishers integrating operations for a period of time while it looks at the deal. The culture secretary also has the option of intervening if there is considered to be a public interest issue such as media plurality. Trinity Mirror shareholders also have to approve the deal.

Is this the end of Desmond’s time as a media mogul?

Pretty much, yes. Part of the deal will see him become Trinity Mirror’s third-largest shareholder, but the sale will end his 44 years as a publisher, as he refocuses on property development. In his 18 years as owner of Express Newspapers, Desmond has made almost £450m in pay, dividends, rent, and the proceeds of the Trinity Mirror deal. He bought the papers for £125m in 2000.

By Mark Sweney, originally published 28 Feb, 2018 in the Guardian

The editors of the Daily Express and Daily Star have resigned days after the publisher of the Mirror completed its £200m takeover of Richard Desmond’s national newspapers.

The Daily Star editor, Dawn Neesom, the longest-serving female national newspaper editor, and her counterpart, Hugh Whittow, who has edited the Daily Express since 2011, have announced they are leaving.

Whittow, who has worked at Express Newspapers for decades, is understood to be announcing his departure on Thursday.

The departures will concern the approximately 900 Express Newspaper staff – of whom about 350 are editorial – who have been told by the chief executive of their new owner that they will remain editorially independent.

Fox is expected to address staff at 10.30am on Thursday.

Fox has said there will be some pooling of editorial resources, such as creating a sports department to provide content to all titles, but that areas such as politics will remain separate. However, Trinity Mirror wants to make £20m in annual savings, with £9.3m from “content generation”. This will mean job cuts.

Trinity Mirror is understood to have hired Mark Hollinshead, a Trinity Mirror veteran who rose to second-in-command and left when Fox was appointed chief executive, to run Express Newspapers for an interim period before the full merger.

The Competition and Markets Authority is expected to announce that it intends to investigate the takeover, which could raise issues of competition and market share, this week.

The CMA could issue an order that the two businesses operate as standalone entities for an extended period of time before allowing the takeover to happen.

Trinity Mirror is expected to formally announce completion of the takeover deal to the stock market on Thursday.

By Jim Waterson. Originally published 24 April 2018 in the Guardian

The Daily Express editor has said some of his newspaper’s past front pages have been “downright offensive”, made him feel “very uncomfortable” and contributed to an “Islamophobic sentiment” in the media.

Gary Jones, who took over at the newspaper last month, said he was unhappy with some of its previous coverage and would be looking to change the tone of the Express.

“Each and every editor has a responsibility for every single word that’s published in a newspaper,” he told the home affairs select committee, which is investigating the treatment of minority groups in print media.

“Cumulatively, some of the headlines that have appeared in the past have created an Islamophobic sentiment which I find uncomfortable,” said Jones, who is also the editor of the Sunday Express.

“It is my responsibility to ensure content is accurate and newspapers don’t look at stereotypical views that may or may not be around in the general public. I should be held to account and be answerable.”

Jones, who was previously the editor of the Sunday Mirror and the Sunday People, replaced Hugh Whittow this year after Richard Desmond sold his Northern and Shell newspapers to Trinity Mirror in a £200m deal.

The Daily and Sunday Express have been relentless in their support for Brexit and campaigning for reduced immigration.

“I’ve gone through a lot of former Express front pages and I felt very uncomfortable looking at them,” Jones told MPs. “There have been accuracy issues on some of them, and some of them are just downright offensive. I wouldn’t want to be party to any newspaper that would publish such material.

“I have to accept as a newspaper editor that people have different views to my own and a newspaper is there to represent the broader section of views. But I think there are limits as to how far you should go in an honest and fair-minded society.”

The Sun’s managing editor, Paul Clarkson, also appeared in front of MPs and dismissed suggestions that newspapers have a problem with Islamophobia. “In the mainstream media, I don’t believe it is an issue,” he said.

The Labour MP Naz Shah held up a Sun front page with the headline “1 in 5 Brit Muslims’ sympathy for jihadis”, which was ruled to be misleading by the press regulator Ipso, and criticised the paper’s record on covering British Muslims.

“You chose to present an outright lie as a fact because it supports your editorial narrative, which undeniably stirs up hatred against Muslims,” she said.

Clarkson apologised for mistakes in that report, but insisted it was not part of a wider pattern and said the paper’s coverage had changed. He said a large number of complaints in the media about the Sun’s coverage were made by “politically motivated or other kinds of interest groups”, and said the newspaper never received praise when it ran stories that showed Muslims in a positive light.

Peter Wright, representing the publisher of the Daily Mail and Mail on Sunday, also denied his newspapers were Islamophobic. “There is no anti-Muslim agenda. It doesn’t exist,” he said.

He said newspapers had toned down some of their language in recent years, but claimed Hindu and Sikh communities had complained to the Mail about the newspaper using “Asian” instead of “Muslim” in copy.

Wright also downplayed the influence of newspapers on Islamophobia in society. “I don’t know where people have got their views from. We’re told these days, they get them all from social media,” he said. “I’m afraid I think social media is a dreadful cesspit.”